So, did Elliot Stabler’s return to Law & Order: SVU live up to the hype?

That depends on your L&O proclivities. If you enjoy a solid crime-o’-the-week episode, better luck next week. If you were looking for an exciting and emotionally messy ripping-open of the interpersonal mess left after El abruptly retired from the New York Police Department in Season 12, this was your Christmas.

The hour was the first half of a crossover event that led into the premiere of Law & Order: Organized Crime, the spinoff that follows Chris Meloni’s Stabler as he works with a different unit of the NYPD. Read on for a recap of the SVU episode, titled “Return of the Prodigal Son” (heh), and then go here to read our recap of Organized Crime‘s debut.

The episode opens with Olivia driving in the rain, rushing to a crime scene. Fin calls, wondering where she is, because everyone’s waiting for her at the station. “You’re the guest of honor,” he tells her. Remember that award she was getting? She makes her apologies, telling him she’ll show up when she can. When arrives at the scene, which is a car bombing, she first notices that one of the victims — who’s being loaded into an ambulance — is Kathy Stabler. And when Liv hears someone calling her name, she turns and whispers, “Elliot?” 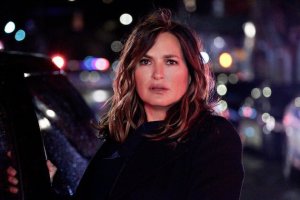 At the hospital, Fin fills Olivia in. The bomb was in a rental car. Apparently the Stablers have been living in Italy, because Elliot is the New York City Police Department’s international liaison (!) in Rome (!!). (Liv speaks for all of us when she says, “Since when?”) He’s in town for a department meeting, but Kathy came with him to make it a trip. And off a tip from Fin, they were planning on attending the party to celebrate Liv’s award.

While Liv is waiting outside the hospital, El comes out: Kathy is in rough shape, but she’s still alive. “Tell me she’s going to be OK,” he says brokenly. “Kathy’s a fighter. You know that,” she replies. Then Stabler’s kids Kathleen and Dickie show up; they’re surprised to see their dad’s old partner, but they quickly go inside.

The squad quickly nabs a suspect at an anti-police demonstration near the bombing. So naturally Stabler shows up at the precinct, quickly meets everyone who’s showed up since he left and begs Benson to let him interrogate the guy. “Liv, I give you my word, I’ll behave,” he says. Of COURSE it’s a terrible idea. Of COURSE Stabler is far too angry and involved to be anywhere near the suspect. And of COUUUUUURSE he’s nearly decking the guy by — I kid you not — 15 minutes into the episode. It’s glorious. Only Liv stepping directly into El’s path stops him and his rolled-up shirtsleeves from clocking the guy into next week.

Olivia is ripping into her former partner on the roof when Dickie shows up: Kathy is awake. And what’s more, the suspect shot his mouth off so much that Carisi & Co. know that he wasn’t behind the car bomb. At the hospital, Kathy can’t remember anything about the incident and is little more than a pile of splintered bones and pooling internal bleeding, but even SHE doesn’t want to discuss anything other than the elephant in the room. “You really didn’t talk for 10 years?” she asks. Liv confirms that she didn’t even know Stabler was working for the force again. “That’s what Elliot told me. I didn’t believe him,” Kathy says, starting to cry. 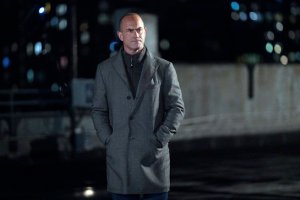 Later, in the waiting room, Stabler apologizes for getting out of control during the interrogation… and a lot more. “Are you sorry for leaving, or are you sorry for walking, for not giving me the courtesy of telling me?” she says. “Both,” he replies. We are DOING THIS. They’re both nearly crying as she calls him out for the way he departed (“I had to find out from Cragen”) and how abandoned she felt in the aftermath. “You were the most, singlemost important person in my life, and you just disappeared,” she says, voice low. “I know,” he says, eyes wet. “I was afraid if I heard your voice, I wouldn’t have been able to leave.” Forget Kathy: I AM THE ONE WHO MIGHT BE DYING.

During drinks with Fin, Elliot runs through his recent whereabouts. He went on a “walkabout” for a few years, then worked private security overseas, then rejoined the NYPD in his liaison role four years ago. He’s got more to do in New York, including testifying at a trial of some minor players he picked up in Puglia, Italy, a few months before. Fin also gives Liv a quick summary of Liv’s personal life over the last decade, including the fact that she has a son and has had a couple of serious relationships. “Who’s the guy?” El wonders, but Fin smiles and says he’ll have to ask Liv about that.

But enough levity! Kathy is going into cardiac arrest! She eventually stabilizes, but we get the point: There’s no guarantee Elliot’s other wife (yeah, I said it) is going to pull through this. Back at the station, Rollins asks Benson if she and Kathy were friends. “Over time, we got real close,” Liv says, because holding someone’s neck stable while they’re simultaneously in labor and a car accident really bonds you.

The investigation is continuing, but honestly, I’m just living for the next Stabler/Benson scene. But Rollins and Kat track down the guy who actually put the bomb in the car, and he hinted that it was a job for hire. And then there’s some legal stuff happening but — oh wait, Stabler is calling Liv and she’s getting a terrible look on her face…

She shows up at the hospital, where El is staring at Kathy’s empty bed. She’s dead. As Olivia approaches, he turns to her and collapses onto her shoulder, starting to sob. Liv embraces him, murmuring “I’m sorry” as he falls apart.

When he recovers a bit, we learn that Kathy’s spleen ruptured, and she died in surgery. “I didn’t get to say goodbye,” he says. “We were happy.” Oof. As he prepares to call his kids — including Eli, who’s in Rome — he makes Liv promise that Kathy’s killer will go down. That’s going to be tough, though, because the suspect they had in custody turns up dead in his jail cell; someone made it look like an overdose. But that’s where it ends for SVU: Garland informs Liv that the case is being taken out of their hands.

Meanwhile, at the hospital chapel, Stabler hugs Dickie and Kathleen, crying, while Olivia looks on.

Next thing we know, it’s a new day, and Stabler is flashing his badge at the courthouse and interrogating the two bad guys from Puglia in Italian (it’s hot), whom he believes were involved in Kathy’s death. Then he warns them that they’re dead men, and we’re out!

Now it’s your turn. What did you think of the episode? Grade it via the poll below, then hit the comments!