To hear The Masked Singer judges tell it, Niecy Nash — who’ll be front and center as emcee when the show returns for Season 5 this week — instantly fit right in at the sequined singing series.

As previously reported, the CLAWS star filled in for regular host Nick Cannon when he tested positive for the coronavirus during Masked Singer production earlier this year. But the extent of Nash’s participation — aka the number of shows in which she’ll appear — was unknown.

During the panel, executive producer James Breen addressed the host change-up. “Nick rejoins towards the second half of the season,” he said. “I won’t be too specific about how many shows, but Niecy kicks things off.” He also praised Nash for being “just a producer’s dream, absolutely fantastic” and for meshing well with Scherzinger and fellow judges Ken Jeong, Robin Thicke and Jenny McCarthy Wahlberg.

Right from the start, Nash added, “every single person supported me and was so kind.” And when her Masked tenure ended, “Man, I was sad to go.”

In addition to new costumes like Porcupine, Russian Dolls and Grandpa Monster, Season 5 will offer up a slight change in gameplay (the introduction of wild card contestants) and a recurring character (Cluedle-Doo, a rooster who has a little fun confusing the judges).

Ahead of the show’s return Wednesday (Fox, 8/7c), here are a few more nuggets about what to expect in Season 5, starting with that pesky cockerel. 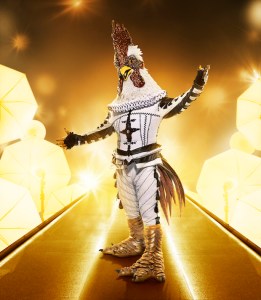 CLUEDLE-WHO? | The fun-loving fowl “messes with us,” McCarthy Wahlberg said. “So even when he think he’s going to give us an amazing clue, sometimes he does, but sometimes he’ll steal it or not tell us or turn it around.”

BORN TO BE WILD CARDS | “Obviously, we can’t tell you who they are,” executive producer Craig Plestis said of the rogue competitors, who’ll perform at the end of episodes in the hopes of unseating an established contestant. But we’ll get clue packages about the interlopers, and some of their back stories might bring a tear to your eye, McCarthy Walhberg previewed. “Some of the wild cards have some of the most moving stories,” she said. “You might think that they come too late in the game, but they really don’t.” Breen added: “One of them, in particular, gives you one of the most emotional performances of the season, and one of the most emotional stories.” 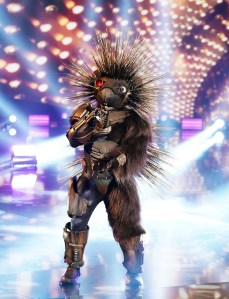 CROWD SOURCING | Masked Singer will continue to use a CGI-created audience, as well as cutaways to past seasons’ audiences, to give viewers the sense that the competitors are performing for a crowd that, for COVID-related reasons, can’t be there. “I think people are pretty sophisticated, and I think everyone knows what’s going on in the world right now,” Breen said. “I also think that big, communal events are what everyone’s missing right now, and we wanted to keep that atmosphere and that fun for everyone at home.” Think of it, Thicke said, as your weekly dose of escapism. “We want to give people something that takes htem away from the reality. We want to give them something to celebrate — great music and great times — and remind us that those times are coming soon again.”