Superman & Lois‘ second hour shed some light on Clark’s new nemesis, while revealing potential darkness in a character we’ve known for quite a while.

Fresh off last week’s “Captain Luthor” jaw-dropper, we learned that Superman’s war-suited adversary blames him for destroying his home planet. And during a follow-up chat with his ship (the Karen to his Plankton), he recited his mission in no uncertain terms: “We need to stop Kal-El before he does to this world what he did to mine.”

And Superman isn’t the only character with whom this masked menace shares a history. “You have to stop protecting him,” Captain Luthor told General Lane. “Where I come from, you’re like me. You don’t trust him either, because you know what he’s capable of.”

Captain Luthor’s ship attempts to talk some sense into him, explaining, “This planet’s Kal-El is not entirely like the one you encountered,” but he’s quick to mansplain, “Not yet.” The episode ends with a flashback to his Earth, where he and General Lane are seen fighting alongside a group of soldiers against a dark-suited Superman, one who doesn’t think twice about using his laser vision to scorch his human opponents. 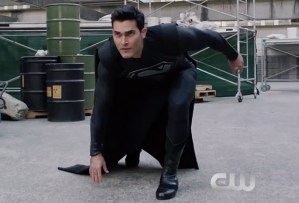 So, how does this evil version of Superman differ from, say, the one we met in 2018’s “Elseworlds” crossover event? According to Tyler Hoechlin, it’ll mirror the (somewhat) subtle changes that his own Clark underwent when Superman & Lois became its own series.

“That’s still unfolding, so we’ll see exactly how that goes,” Hoechlin teases. “But in the same way that you can tell from these first few episodes that [Superman & Lois is] not those other [Arrowverse] shows, it’s fair to say that this will also unfold differently. It’s a familiar character, but it’s a new character at the same time. Just like the fans enjoy watching as it comes out, I’m going to enjoy watching it unfold when the scripts come out.”

But while he can’t offer any specifics about his Superman’s evil doppelganger, Hoechlin says he’s fascinated to discover what could have prompted such a significant change in an otherwise good-natured superhero.

“It’s always interesting when you have a character like this who’s so unflinching in his commitment to doing good and to doing the right thing,” Hoechlin says. “What is his breaking point? What is that tipping point? What is the one specific thing that finally makes someone like that say, ‘No, I’m not doing this anymore’? Every bad guy is the good guy in his own story. For me, the curiosity is always ‘What changed?’ I’m very curious to see where that story goes and what it evolves into.” 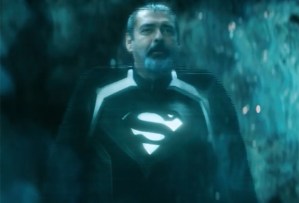 Elsewhere in the eye-opening hour… Lois quit her job at The Daily Planet after it refused to print her scathing op-ed about Morgan Edge, then took a gig under editor-slash-plumber Chrissy Beppo at The Smallville Gazette; Jordan learned (from a no-nonsense hologram of Jor-El at the Fortress of Solitude) that he may never be able to harness his inherited Kryptonian abilities; and Jonathan suffered the wrath of his new football teammates, including Sarah’s still-angry boyfriend.

Your thoughts on Superman & Lois‘ second episode? (The show was just renewed for Season 2, so there will be plenty more where that came from.) Whatever’s on your mind, drop it in a comment below.