With Tuesday’s series premiere of Superman & Lois, The CW is reintroducing viewers to the most iconic couple in the DC canon. And much has changed since we saw them last.

Now the parents of two very different teenage boys, Clark (Tyler Hoechlin) and Lois (Elizabeth Tulloch) are running the rat race in Metropolis, until the tragic death of Martha Kent forces the entire family to slow things down. Martha’s funeral brings the Kent brood back to Smallville, which has also undergone a few unfortunate changes since our last visit.

Sure, it’s nice to see old friends like Lana Lang (Emmanuelle Chriqui) back in the picture, but Clark’s hometown is in need of a savior — and we’re not talking about mustache-twirling billionaire Morgan Edge (Adam Rayner), whose greed and short-sightedness has already impacted Lois’ job at The Daily Planet. 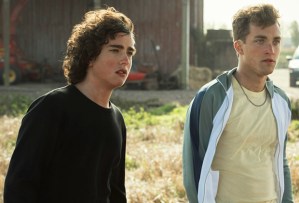 As for the twin teens mentioned earlier, athletic Jonathan (Jordan Elsass) and anxious Jordan (Alexander Garfin) get the surprise of their young lives when they’re nearly crushed to death by a pile of rubble in the barn. (Poles? Pipes? I’m not a farmer. Let’s just go with rubble.) Sensing that at least one of his sons may have inherited his Kryptonian strength, Clark reveals his secret identity to the boys, a decision that blows up in his face when both sons… well, blow up in his face. Jordan immediately, and perhaps rightfully, suggests that his anxiety is a direct result of his parents’ secret-keeping, while Jonathan is just pissed that his “natural” athletic prowess might not be so natural.

On the topic of suddenly fathering teenagers on TV, former Teen Wolf star Hoechlin tells TVLine, “I’m an old soul. I don’t know why, but I’ve always felt that way. Plus, Bitsie and I already had such great chemistry coming into this thing, so it all just felt weirdly natural.” As for whether there’s some truth in his son’s accusation, Hoechlin acknowledges, “We’re seeing Clark at a time in his life where things don’t just affect him anymore. They affect Lois and his kids. It’s not their fault that he’s Superman.”

The Kents’ super family drama is exacerbated when Lana and Kyle’s (Erik Valdez) daughter Sarah (Inde Navarrette) offers to show the boys around Smallville. She and Jordan bond over their respective prescription medications, but his kiss isn’t appreciated… especially by Sarah’s boyfriend, whose subsequent assault on Jordan awakens his latent laser vision, resulting in a dangerous explosion. And, you know, a pretty major party foul. That scary event — plus a surprisingly complicated subplot about reverse mortgages, courtesy of Lana — seals the family’s decision to relocate from Metropolis and take over the Kent farm. 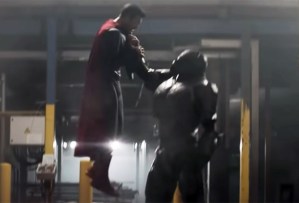 Now that we’ve assessed the civilian drama of Tuesday’s premiere, let’s get to the part we all came here to discuss: the identity of Superman’s mysterious new nemesis! After targeting various nuclear reactors to test Clark’s strength, the suited stranger reveals, “Where I come from, let’s just say the two of us have history. My world was destroyed, but somehow I managed to survive. I eventually arrived here, where I learned you were here, too.” Though little else is explained, the episode ends with this strange villain (played by Wolé Parks) being addressed by his ship as “Captain Luthor.” (Say what?!)

Of that final twist, Hoechlin tells TVLine, “We had conversations ahead of time about whether a Luthor was going to be around, whether we’d work with that name or not. So I was aware before I read the pilot. I didn’t have that same ‘dun, dun, dun!’ moment that the fans had at the end. But I think it’s great. I love it, and I think the fans are going to love it. You need a nemesis, man, and who else?”

“When Greg [Berlanti] and I first started talking about this, we wanted an iconic villain for Superman,” showrunner Todd Helbing explained to reporters earlier this month. “It was our opportunity, coming out of [Crisis on Infinite Earths] to tell a new story and bring the audiences this new journey with somebody that they feel like they’ve known. John Cryer’s on Supergirl, and he’s done this crazy, amazing job with Lex Luthor. But our show is different. We wanted to tell a new story. There’s a lot of twists and turns, secrets are revealed and mysteries unfold in [a] way that this version is going to feel fresh and new and completely different than anything we’ve seen before.”

Fortunately, you won’t have to wait long for real answers, as the second episode reveals much more about this “Captain Luthor.” Until then, grade Tuesday’s premiere in our poll below, then drop a comment with your full review. Are you flying high on Superman & Lois?