With the Arrowverse crossover’s body swap/quantum leap firmly established, Monday’s Arrow kicked off with a cheeky new intro/voiceover, featuring The Flash star Grant Gustin as the archer. (There was even a shot of not-the-real-Oliver-Queen doing pull-ups at Slabside!)

“Elseworlds, Part 2” also introduced Batwoman and resolved a major “Olicity” relationship hurdle. Here, we highlight the best moments, with scoop from the producers on the twists:

FIGHT THE PAST | After falling prey to a serious hallucinogenic at Arkham Asylum, Oliver and Barry see each other as the Reverse-Flash and Malcolm Merlyn, respectively. Although both heroes have had their fair share of enemies, the Reverse-Flash and Malcolm were always the producers’ top choices for the nostalgic fight sequence. “That was always the conceit because it’s their origin story, it’s their Season 1 Big Bad, and it’s made both characters who they are,” Arrow showrunner Beth Schwartz explained at a press screening. “And it allowed [Barry and Oliver] to really understand one another.” 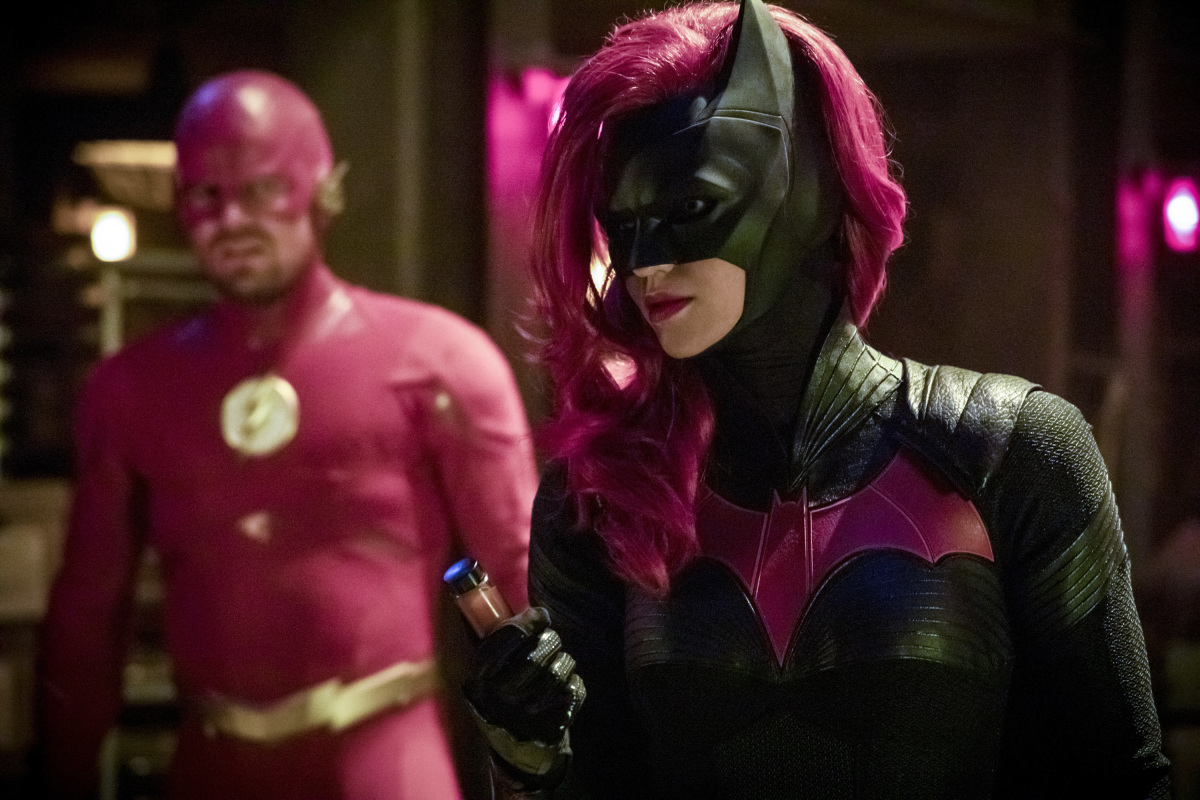 THE TATS TELL A STORY | Kara remarks that Kate Kane (Orange Is the New Black‘s Ruby Rose) has a lot of tattoos for a CEO — and that little detail later proves to be the thing that gives away Batwoman’s secret identity. As Supergirl reminds her, she’s got X-ray vision, so all those tats under Batwoman’s costume aren’t so hidden. Unmasking the Gotham hero so quickly to Kara “felt like the right move,” said Caroline Dries, who will oversee the potential Batwoman series. “It was important for us to humanize Kate in a way that made her relatable to the other characters in the Arrowverse, even though we were creating an enigmatic character,” Dries added. Much like Kate, Kara has a cousin, “and her story was getting out of his shadow, and that’s exactly Kate’s story. So it was important for us to find a moment for them to bond.”

‘OLICITY’ EVER AFTER | Initially, Oliver decides to keep Felicity in the dark about the body swap because he thinks they already have enough marital problems. So naturally, when Felicity learns the truth, she’s upset that Oliver didn’t trust and respect her. Caitlin pushes her not to give up on love, while Barry urges Oliver not to wait too long to work things out. Thankfully, Oliver takes his advice and tells Felicity that it’s OK that they’re changing because it means they’re growing and evolving as people. But one thing will not change: “You’ll always be the love of my life,” he says before the couple kisses. And in case that smooch wasn’t reassuring enough: “Yes, they are made up now. They’re in a good place,” Schwartz confirmed. Through the process of becoming “a different person, literally, in the crossover,” Oliver “was able to understand [Felicity’s] journey, which made for a perfect time for him to realize that he might have been overreacting in Episode 8, and it was a nice resolution, as well.” 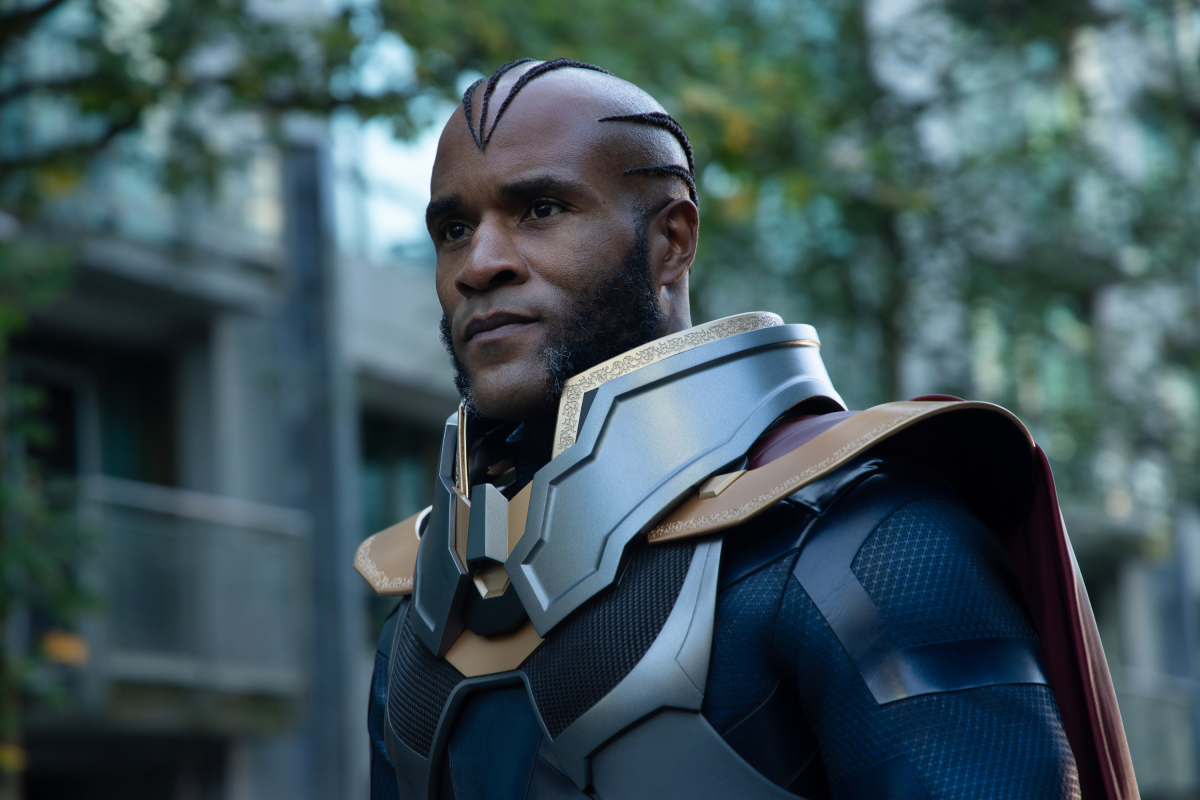 A CRISIS IS COMING | In a moment that probably sent chills down comic book fans’ spines, The Monitor explains that he is testing different worlds for an upcoming crisis. Someone powerful is coming, he warns, and he needs to find heroes strong enough to save the multiverse. Producers were mum on which future catastrophe The Monitor is referencing, only sharing that “we already know a lot about what’s going on in next year’s crossover,” per Schwartz. 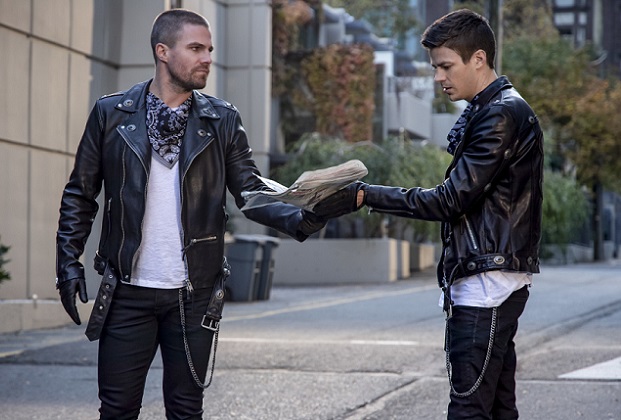 TRIGGER TWINS | At last, we have an explanation for Barry and Oliver’s matching biker outfits! At The Monitor’s urging to think bigger, John Deegan resets reality again, with the heroes now known as the wanted duo Trigger Twins. Barry and Oliver are then promptly cornered by cops Diaz, Merlyn and Joe Wilson, as well as an evil Superman. Life just got a whole lot weirder!

What were your favorite moments from the crossover? And based on this episode, would you tune into the potential Batwoman series?