Those Outlander fans who enjoyed Jamie’s Highland Fling last season: Have we got an episode of Men in Kilts for you.

Sunday’s installment of Sam Heughan and Graham McTavish’s travel series focuses on traditional Scottish music and dance, which are used for “celebration, battle and everything in between,” Heughan voiceovers near the top of the episode. And nothing screams “Scotland” like bagpipes, which we are informed are a mainstay of Highland dancing, marching bands and raucous gatherings known as ceilidhs (pronounced “kay-lees,” for those of you who haven’t been Diana Gabaldon’d).

After Sam serenades Graham with the Outlander theme song (aka “The Skye Boat Song,” a Scottish folk tune) in a rowboat — yes, you read that part of the sentence correctly — the action jumps to Glencoe, in the Highlands. The guys are eating breakfast at an impeccable campsite when they’re joined by Gillebride MacMillan, a Gaelic singer/storyteller who played Gwyllyn the Bard in Season 1. (He showed up in the episode where Claire caught Jamie and Laoghaire making out in the alcove.)

The trio talk about how Gaelic used to be spoken by much more of the country, and how it lives on in storytelling and song. Then he sings, and the guys join in with him. (And if it’s not clear from this scene, the next nails it, God love ’em: Both Graham and Sam spend part of their time in the camper van talking about how they can’t really sing or dance well.) 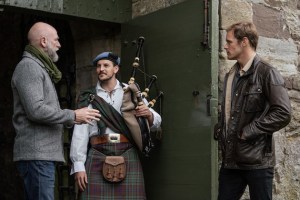 The next stop is Doune Castle, which stood in for the exterior of Castle Leoch in the earlier seasons. There they meet Ian MacGillivray, a bagpiper and the leader of Clan MacGillivray. The unique instrument originally was meant “to put fear into the enemy,” he tells them; pipers would lead the charge into battle, then hand off their pipes and hop into the carnage. We also find out that Graham and Ian are distantly related, which of course made me think about this passage in The Fiery Cross, where Claire remarks on how “the meeting of any two Scots invariably began with the casting out of skeins of inquiry until enough strands of relation and acquaintanceship had stuck to form a useful network.” Anyway, thanks for the song, Ian! We’re off to kick up our heels and strut our stuff!

First, Sam and Graham try their feet at sword-dancing, under the tutelage of a Highland dancer named Cerys Jones. Essentially, you’re not supposed to touch, kick or otherwise move the crossed cutlery while prancing around it. Cerys teaches them a simple combination, they mess it up in hilarious fashion, and the whole thing ends with the guys breathing heavily. “I’m absolute, ball-out, completely awful,” Graham says.

Next, the guys clown around with the Glencorse Pipe Band. Sam’s handling of the baton, in particular, is inspired — and while that sounds like a euphemism I’d use while writing an Outlander recap, here it’s just an accurate description of what’s happening. Then they’re off to Borthwick Castle outside of Edinburgh for a ceilidh. 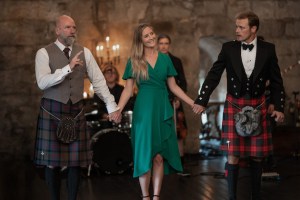 Both men sport their Scottish best for the event, which starts off with a dance lesson from Sophie Jessop Stoer. She runs through things quickly, and then it’s time for the band to get started and everyone else to show up! The song is so catchy, and the dance seems like so much fun. The slo-mo shots of everyone wheeling around and stomping their feet are a nice touch; at one point, Sam taps out to tie his shoe, calling “Carry on without me!” to Graham and the rest.

When it’s over, the disheveled but still dapper Graham and Sam sit on the ground near the camper and drink from their flasks.

Now it’s your turn. What did you think of the episode? Hit the Comments and let us know!