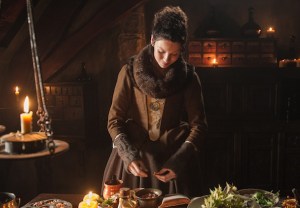 You’ll have to excuse poor Claire in this week’s Outlander. After all, a desperate person will grasp on to any hope – no matter how slim, improbable and/or inspired by a folk song – if it means achieving a desired outcome. And Claire is as desperate as they get.

To paraphrase Frank, woe betide the person who gets between Claire and what she’s set her mind upon. So let’s step aside and review what happens in “The Way Out.”

FITZ FIT | After a flashback to Claire and Frank during the war — he wants to call in favors to get them assigned to the same place, she thinks it’s unfair to all of the soldiers who don’t have any strings to pull, then he lovingly calls attention to her stubbornness – we meet up with Claire in the 1700s as Mrs. Fitz helps her bathe.

Claire seems utterly bereft… which is the only explanation for the insanity that follows. She starts to spill her story, her real story, saying things like Frank “hasn’t been born yet,” “I seem to have fallen through time” and “I’m not an English spy. I’m from the future.” The older woman doesn’t take it well – “Begone, evil demon!” she shouts – and just as I’m wondering why the heck the series chose to insert this scene into the narrative, we see that it was just a product of Claire’s mind wandering while Mrs. Fitz combs her hair. (Side note: Phew.)

Fitz is nattering on about the upcoming Gathering, when all the men of the clan will come to Castle Leoch to pledge their loyalty to Colum. Speaking of the clan’s head, he becomes much more enamored of Claire and her presence at the castle after she works some massage magic on his twisted legs and tortured back. The deep-tissue session earns her an invite to hear the castle bard, as Colum’s guest, that evening.

WINE, WOMEN AND SONG | The concert is nice and all, but I’m more interested in what goes on in the audience. First, Claire and Laoghaire – the girl for whom Jamie took a beating in the previous episode — formally meet. Then, when Mr. NotMacTavish himself comes to sit with them, he’s no verra interested in Claire’s attempts to make him notice the overeager blonde teen on the bench beside them. (Side note: Smart man.)

Eyeing how much strong wine Claire has imbibed, Jamie sees her safely to her surgery, where they proceed to be very cute together. Though she’s tipsy, she stops him from leaving by offering to check his shoulder wound. Goodness gracious, these two shouldn’t be able to smolder while uttering the words “scabbed” and “drainage,” but there you have it. He eventually leaves, and she exhales slowly. Yep, right there with ya, Claire.

Despite his seeming disinterest in young Laoghaire, Claire later catches Jamie smooching the girl in an alcove, which she teases him about at dinner. Two things: 1) Caitriona Balfe and Sam Heughan have nailed Jamie and Claire’s playfulness, and 2) Murtagh totally sees through your gentle mocking, Claire, and he’s got something to say about Jamie’s romantic prospects: “He needs a woman, not a lassie, and Laoghaire will be a girl until she’s 50.” As Claire looks chastised, her voiceover admits that she’s jealous of the intimacy she witnessed between Jamie and the blonde. In a strictly missing-Frank way, of course… EXORCISMS AND ESCAPES | The next day, while gathering greens with Geillis, Claire learns that Mrs. Fitz’s nephew has been taken down by the same “evil” that killed Colum’s chambermaid’s son. Turns out, both boys had been trying to prove their manhood by eating some (unbeknownst to them) poisonous plants, and Claire’s administration of the antidote – though successful – is seen as meddling witchcraft by the misogynistic local priest. (Side note: Can someone please knit me the gorgeous scarf Claire’s wearing in this scene? I’ve helpfully inserted a photo of it here. Shouldn’t be too hard, for you crafty, Ravelry types. So go on and get those needles a-clickin’!)

Claire’s 20th-century sense of justice continues to be affronted when, during a visit to Geillis’ house in town, a boy who has confessed to stealing is punished by having an ear nailed to a post in the public square. (That’s the lenient sentence, by the way.) Jamie’s unexpected arrival both gets Claire out of having to answer Geillis’ prying questions and helps her free the boy from an extended bout of pain and humiliation.

RELATED The Girlfriend Experience Anthology Is Coming to Starz

Back at the castle, after sporting some handwarmers that cannot possibly keep her hands warm but I don’t care I still want them, Claire is crestfallen to find out that Colum is so impressed with her healing skills, he plans to keep her around a lot longer.

Crestfallen, she drinks her sorrows and attends that night’s concert, where Jamie translates the singer’s lyrics for her. She perks up when a folk song tells the tale of someone hurled through time who then returns home. “I must escape Castle Leoch and get back to the stones as soon as possible, or die trying,” Claire voice-overs. Eh, I’ve come up with far worse plans after a couple of glasses of wine…

Now it’s your turn. What did you think of the episode? Do you have thoughts on Geillis’ not-so-gentle prodding? Are you growing a soft spot for Claire’s constant, Dougal-ordered companions? And seriously: Can someone knit me that scarf and/or those handwarmers? Be mindful of divulging spoilers, oh good book folk, and sound off in the comments!