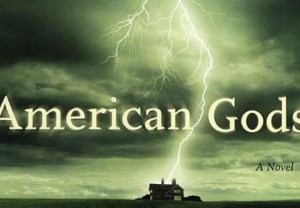 The man behind TV’s Hannibal is taking on another popular book: Neil Gaiman’s American Gods.

Writer/producers Bryan Fuller and Michael Green (The River, Kings) are penning an adaptation of the urban fantasy novel for Starz.

Fuller and Green will serve as showrunners on the potential series, while Gaiman will be an executive producer.

“Neil Gaiman has created the holiest of holy toy boxes with American Gods and filled it with all manner of magical thing, born of new gods and old,” said Fuller in a statement. “Michael Green and I are thrilled to crack this toy box wide open and unleash the fantastical titans of heaven and earth and Neil’s vividly prolific imagination.”

American Gods was previously in development at HBO.

* Amazon has officially added the thriller Hysteria to its third round of pilots, per Deadline. The project stars Mena Suvari (Chicago Fire) as an exceptionally bright but socially awkward neurologist/psychiatrist who travels to her hometown of Austin, Texas, to investigate a mysterious epidemic that might be spreading among high school girls — via technology. Grey’s Anatomy alum T.R. Knight plays her imprisoned brother.

* Don’t have WGN America? You may still be able to check out the network’s new original series Manhattan, which will encore on Tribune stations in 33 markets nationwide on premiere night, July 27, including WPIX/New York, KTLA/Los Angeles, WGN/Chicago, WPHL/Philadelphia and WDCW/Washington, DC.