Sunday’s Outlander featured a brief snippet of a Highland Fling, an elaborate dance Jamie performed during a night of merriment with the men marching in his militia. (Read a full recap of the episode here). Naturally, Big Red’s high-stepping interlude was one of the first things we wanted to talk about during Sam Heughan‘s recent visit to TVLine’s offices. Read on for his thoughts on pulling it off — as well as the dance’s deeper meaning — and his thoughts on the Frasers’ decision not to raise wee Bonnie as their own.

TVLINE | I’m going to ask you about the dancing now.
Oh God. [Laughs] 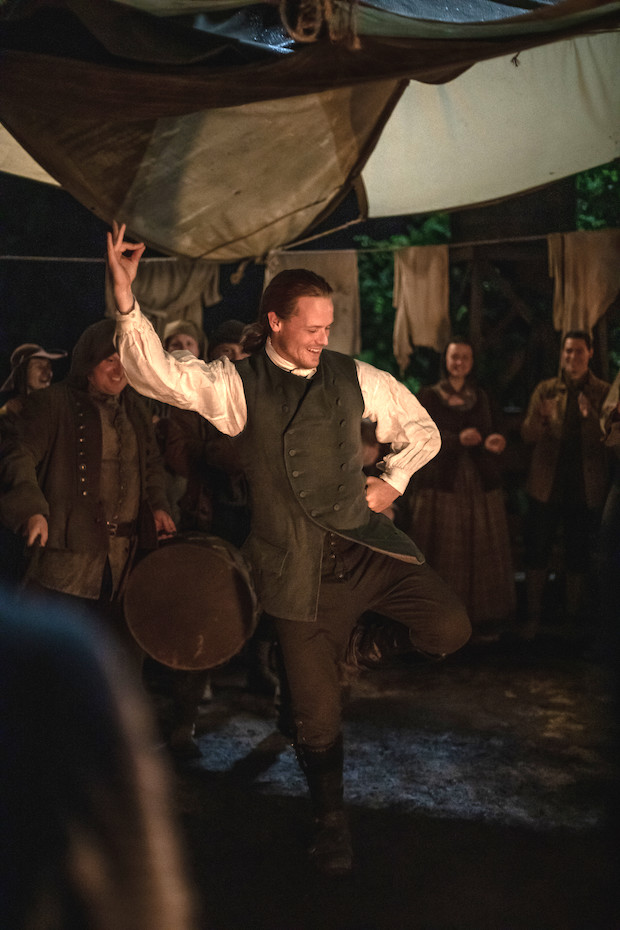 TVLINE | Tell me how long it took to figure out what that would look like. How much did you have to prep?
In the book and in the script, it was a sword dance. I wanted to do a Highland Fling, because I felt like we’d seen the sword dance in the show. Duncan [Lacroix] did a really great version of that [in Season 1]. So actually what I’m doing is the Highland Fling, which is a dance that they do around the battlefield. It’s all about kicking off the chains of the British, there’s this this sort of leg kick, and the hand [positions] are about the stag. It’s about prowess, but it has a message as well. It’s one of sort of rebellion, so I liked that.

It was fun. The situation is, they’re letting loose for a little bit, and it’s kind of cool that Claire gets to see Jamie do that for the first time. She’s like, “Oh, he can actually move!” [Laughs] Pretty tough, because the boots I’m wearing are impossible to dance in, and you have to be really up on your toes. It’s kind of hard in those big boots. But I had a friend of mine who helped teach me; she’s a Highland dancer.

TVLINE | I love the conversation that Jamie and Claire have about the baby, and whether they want to raise that baby as their own, having missed the opportunity to do that with Brianna. Could you, personally, envision Jamie being the father of an infant at this point in the storyline?
I mean, he’s desperate to do it. He’d love to. It’s something that he really yearns for. He missed those years with Brianna. He’s so glad that she’s there now and he gets to be a father, but he never had it — and with Willie, he didn’t really get it, either: He sort of could be a father from afar ,but not really be hands-on… I think it’s really nice.There’s still yearning with these two characters, even though they’re older and they’ve spent years together and time together, they still yearn for another life with each other. I think that’s really beautiful. It’s romantic.