On the occasion of Jamie and Claire’s arrival in Brownsville in this week’s Outlander, I’ve been thinking about a few travel slogans that the North Carolina hamlet might want to consider. Y’know, to attract more visitors to its lovely… environs? And, um, its considerable heaps of barrels?

Brownsville: Because who doesn’t love the tension of being surrounded by a simmering mob about to boil over?

Brownsville: Come for the sniper fire, stay for the ample breastmilk?

Brownsville is for lovers… who might have to sneak outta town under cover of dawn?

Those who’ve read Diana Gabaldon’s books know that Brownsville will continue to play a role in the story going forward. And if you haven’t read the novels but got an overall uncomfortably icky feeling from the place while the Frasers sojourned there in Sunday’s ep, congratulations! Your Sassenach senses are operating at full capacity: Brownville suuuuuuuuuucks.

Read on for the highlights of “The Company We Keep.” 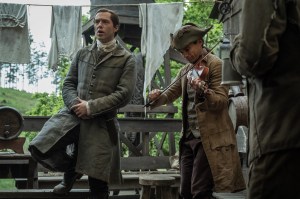 SHOTS FIRED! | While Jamie and Claire are delivering babies and dodging goats at the Beardsleys’ house of horrors, Roger and Fergus keep Fraser’s militia moving forward. Everything is going fine until someone starts shooting from a house the troops are passing; from the resultant shouting, we learn that militia member Isaiah Morton knocked up the daughter of the house, and her dad is pretty mad about it.

Roger does the only thing he can think of to ease tensions: He opens a cask of Jamie’s whisky and passes it around, starting with the girl’s father, then sings a jaunty tune. Because alcohol always makes violent situations, especially those including firearms, better! Apparently the specific domestic situation Rog has stumbled into is this: The girl’s father, Lionel Brown, had been planning to marry her off to another man, but she was so in love with Morton that she confessed they’d slept together — which made the arranged betrothal invalid.

Eventually, Jamie and Claire catch up with the men, arriving at what seems like one heck of a party in Brownsville. Jamie lets Josiah and Kezzie that they’re free now, then sends Josiah home to hunt and provide food for the denizens of Fraser’s Ridge. Fergus is amused by the fact that his adoptive parents apparently have spawned while they were gone — “Congratulations. You work fast, Milord,” he jokes — but Jamie’s not laughing when he gets Roger alone.

Himself doesn’t approve of how Roger handled the situation, nor that some of the men took off because of it. Roger sheepishly notes that he was hoping Jamie would appear by the time the booze ran out, “and ye did.” (Heh.) An exasperated Jamie finds Morton and susses out that the man can’t marry Brown’s daughter, because he already has a wife. So Jamie frees him from where Brown has him detained, telling him never to return. 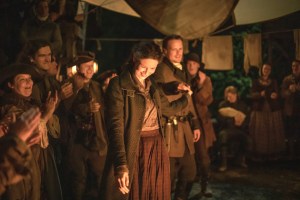 AN EVENTFUL NIGHT IN BROWNSVILLE | Throughout all of this, Claire has been in charge of Fanny’s infant daughter, who badly needs to be fed. A nursing mother volunteers to help; while Claire sits with the woman and some other females, she notices with shock that her Dr. Rawlings flyer has been published in the local newspaper. She later shares the news with Jamie, who wonders who Dr. Rawlings is. “Me,” she says, worried. “Beauchamp, Randall, Fraser, now Rawlings? You have another husband I should ken about?” he teases her. He guesses that the medical info got to the printer when Fergus accidentally wrote on the back of the flier, and it’ll probably be fiiiiiine.

Just then, Brown and his men realize Morton is gone. Lionel Brown is about to fire on Jamie and his group when Lionel’s brother, Richard Brown, arrives on the scene and dispels the standoff. Eventually, the three men strike a deal: To avoid any trouble with Governor Tryon, the Browns and their men will join Jamie as far as Hillsborough — but they’ll answer to Richard. “As long as we’re in agreement,” Jamie stipulates, adding, “You will answer to me.”

With that settled, the Browns invite Jamie and his entourage to stay the night. Everyone drinks and dances and drinks some more — at the urging of his men, Jamie performs a particularly smart Highland Fling, which causes Claire to dissolve in giggles — and both Mr. and Mrs. James Alexander Malcolm MacKenzie Fraser are pretty tipsy by the time they’re walking alone in the woods. (Make sure to see what Sam Heughan had to say about performing the jig and more.)

He asks whether she wants to keep “wee Bonnie” (aka Fanny’s baby), and he’s surprised that Claire had been mulling the idea of leaving the girl with a Brownsville family who’d expressed interest in taking her in. “I thought maybe this might be the last chance for us to raise a bairn together,” he admits, adding that if she wanted another child, “I thought that I might give you one, one that you didn’t have to suffer carrying.” She says she loves him for even considering it, and she shares his regret that they weren’t able to raise little Bree together, “but regret isn’t reason enough.” (Plus: Marsali is basically a baby factory. You guys are going to be lousy with babehs for the foreseeable future.)

The Frasers kiss and hug in the moonlight, but their romantic reverie is broken by Isaiah Morton’s lady, Alicia Brown, who’s just tried to kill herself a few feet away. She’s pregnant and heartbroken, and can’t imagine a future without her true love. They get the poor thing home; outside, Jamie runs into Isaiah, who’s snuck back against his commander’s wishes. He didn’t know about the pregnancy, and when he finds out, he holds Jamie at gunpoint until he can see Alicia. Ballsy! 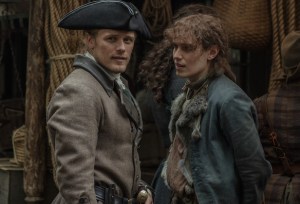 A VICTORY FOR TRUE LOVE? | Turns out Isaiah is in a loveless, long-distance marriage with the woman to whom he is currently married; Alicia, on the other hand, is “my heart and soul,” he tells Jamie, which sways him. So pretty soon, Col. Fraser is helping the lovesick kids escape again — and though the Browns are fairly certain that their new sorta-ally directly undermined them, nothing is said aloud.

Elsewhere, Claire determines that Josiah’s brother, Kezzie, has infected tonsils, just like his twin. Surgery is necessary, but she isn’t going to do it without the penicillin she’s been cultivating at home. So he tells her to plan to return to the ridge, with Roger as her escort. “He doesn’t have any faith in me,” Rog grouses. “He just entrusted you with the one thing he loves most,” Claire counters.

BEWARE OF BONNET | Speaking of the ridge, Brianna is spooked she returns from town to find out that there was an “Irishman” asking questions and ruffling Jemmy’s hair. Brianna doesn’t let on that she’s worried about Stephen Bonnet sniffing around her kid, but then announces that she, Lizzie and Jem are going to move into the Big House until her parents come back.

Later, when Jem wanders off in the house and can’t be found for a minute, Bree (understandably) loses her damn mind. He’s found a moment later, but Marsali knows something is up. So later, she and her sister-in-law have a drink. Brianna is hesitant to say anything, so Marsali says, “I never told you this: I killed my father.” (Spoiler alert: She really didn’t.) When her dad beat her, her sister and Laoghaire, she wished him dead. And then one day, he was arrested as a Jacobite and died in prison. Bree says that doesn’t mean Marsali was responsible. And Marsali quickly points out that yes, thinking about something doesn’t make it so.

Later on, Bree burns all her drawings of Stephen Bonnet.