The Riverdale kids are now the teachers at Riverdale High — ah, it seems like just a few weeks ago, they were graduating — and two of them are getting awfully cozy in between classes.

Wednesday’s episode finds the old gang back at school together, only as the faculty this time, with Veronica (sorry, “Ms. Gekko”) teaching economics… and turning heads among the school’s hormonal boys. Archie is running the ROTC, Jughead is teaching Of Mice and Men in English class (in a smart corduroy jacket!) and Betty is taking apart car engines in auto shop. She’s still worried about Polly, who’s been missing for days, but Archie volunteers to “distract” her, and the two of them steam up the windows together in the auto shop’s car. No wonder the school’s fire alarm goes off — but oops, it’s actually a fire, set by some hooligans who run off as Archie douses the flames.

It’s the work of Stonewall Prep students, under the orders of Hiram, who’s not happy Riverdale High is open. Archie discovers the culprits are football players, and Reggie’s their coach, so he confronts his old friend and cold-cocks him on the practice field. He boasts that Riverdale could stomp Stonewall on the gridiron… the only problem is, Riverdale doesn’t currently have a football team. So he recruits a ragtag squad of players, including a girl named Britta, and turns to Cheryl for help with funding the team. But when he brings up the idea of doing it to honor her late brother Jason, she flies into a rage and orders him to leave. (Touchy subject.) 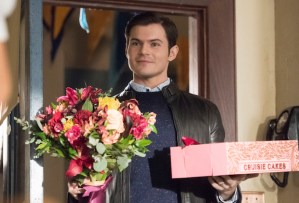 Veronica gets a visit from her husband Chad, who surprises her with flowers and cupcakes. He meets Archie for the first time, and they exchange an awkward handshake. (Brrr… is it chilly in here?) Chad joins the gang for karaoke night at the Whyte Wyrm, where he and Veronica duet together on “Shallow” from A Star Is Born — not bad! — and share a warm kiss that turns into a bedroom tryst. They make a plan to split their time between Riverdale and New York, and he even supports her idea of opening a jewelry store in town, but alarm bells go off for Ronnie when Chad says Hiram offered him a job managing properties in SoDale. Plus, when Archie asks for money for the football team, Veronica offers it immediately… but Chad suggests he renovate their apartment as payment instead of taking “handouts.” That’s the last straw: Veronica sends him packing back to New York, asking that they spend some time apart.

Meanwhile, Betty is still searching for Polly: She hears from Toni that Polly had been hanging out at a sketchy truck stop, and she finds some messages Polly exchanged with a trucker online. She takes the dude into custody, and he swears he last saw Polly three days ago when she jumped out of his truck and ran away. Betty and Alice search the area and find Polly’s boots and wallets by the side of the road. As they track Polly’s phone to a nearby swamp and start digging around, Archie is proudly putting the football team back together — thanks to Veronica “Lodge” — but Hiram doesn’t like the sound of that. That night, Archie and Jughead discover a fire burning on their front porch… and their back porch, too. 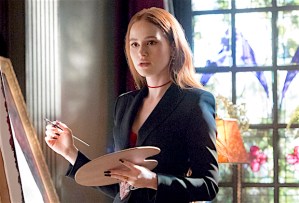 More highlights from “Back to School”: Cheryl got her art forgery side hustle going, selling a fake portrait to an art buyer named Minerva Marble for a cool quarter-million bucks; Jughead stumbled upon another strange piece of Riverdale lore when he interviewed an old coot about “the Mothmen,” invading aliens who abducted townsfolk and took them onto their spaceship (sounds like his next book!); Toni threw on an HBIC shirt and started up the Vixens again to compete in cheer competitions, and Cheryl was not pleased; and man, the school secretary Miss Bell is quite the blabbermouth, isn’t she?