The Riverdale teens actually spent time inside their high school for a change this week, putting on their caps and gowns to graduate — but a look ahead painted a harsh picture of their future.

Jughead is still blaming himself for his sister Jellybean’s dark turn as the video auteur, and F.P. has a solution: He’s moving her back to Toledo with her mother… and he’s going with her. (Alice takes it hard, but Betty reassures her she’ll come home from Yale to visit.) Jellybean confesses to where her accomplices are hanging out, and Archie finds them sleeping underneath the boxing ring at his gym. Jughead is worried about the next generation of Riverdale teens, but Archie’s more worried about whether he’ll graduate on time. 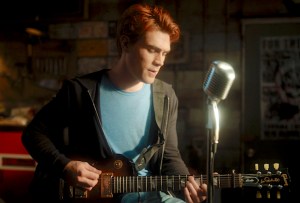 At school, Archie spies an Army recruiting stand and takes notice when Cheryl opens up a time capsule from 1945 and pulls out a photo of Riverdale High grads heading off to war. (Hmmm.) He also gets some bad news from Principal Weatherbee: He won’t be graduating with his friends, and summer school can’t even fix it. He’ll have to repeat his senior year. He lies and tells his friends he can finish up at summer school, though, and after he and Veronica reunite for one more night of passion, he blows off her questions about the Army.

It’s graduation day, and Archie gets a little misty watching everyone else celebrate with their dads, admitting to Mary that he misses Fred. (He’s there in spirit, though, she assures him.) Betty gives a speech as valedictorian, telling the kids of Riverdale to hold onto their innocence and “stay young as long as you can.” (You know, until the next murder mystery starts.) The teens all receive their diplomas — except for Archie, who gets an empty cover. F.P. and Jellybean ride off into the sunset on his motorcycle… and Archie signs up with the Army recruiters. 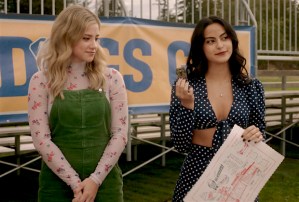 He and his friends make a time capsule of their own, throwing in a menu from Pop’s, a pair of cat ears for Josie — yes! Justice for Josie! — and Jughead even tosses in his iconic beanie. (Yeah, the kids of 2095 are really gonna want to hang onto that.) Then they share a drink in the stadium bleachers and make a vow that they’ll all reunite at Pop’s one year from now, and every year after that. When Archie admits he joined the Army, though, Veronica gets upset: “You do know there’s a war going on, right?” (Oh, but being in the Navy was fine, I guess?)

Riverdale‘s other couples are on shaky ground, too: Betty confesses to Jughead about her kiss with Archie, and though Jughead takes it in stride, there’s a weird vibe between them. Plus, Cheryl decides not to go to college with Toni, staying in Riverdale to revive the Blossom family business, so they’re headed for splitsville as well. Jughead takes Archie to the bus stop to join the Army, and the gang has one last sweet moment together when Betty drives Archie’s jalopy and chases down the Army bus so Veronica can say a final goodbye to her Archiekins.

But things went downhill quickly after that, Jughead tells us: Veronica spent the summer with her mom “and Andy Cohen in the Hamptons,” and he and Betty drifted apart, with her leaving for New Haven early and them agreeing to go their separate ways. Jughead squatted in Archie’s empty house for a while, and then the bunker before leaving for Iowa. But a year later, Jughead is the only one who shows up at Pop’s for their planned reunion. “It’d be six years before I saw my friends again,” he reveals, when they’ll be brought together by “a new crisis, a new mystery.” Alright, time jump, here we go…

* This really felt like a season finale, didn’t it? It makes sense that this was originally slated to be the Season 4 finale, before the coronavirus pandemic shut down production.

* Lots of heart-wrenching moments involving Archie and his late dad Fred this week. He even had a dream where Fred was taking pictures of Archie and his friends in their caps and gowns! (You might remember that was a flash-forward in the Season 2 premiere.) R.I.P., Luke Perry. 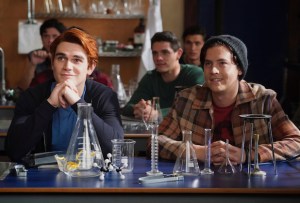 * Regarding the scene where the teens watch their final minutes of high school tick away on the clock: Um, all the main characters are somehow in the same chemistry class together?

* We don’t see much of Kevin Keller these days, but he did get the week’s best line of dialogue when he looked through the senior yearbook and marveled that it included “the musicals, despite the fact that…” (Um, that people were murdered during them?)

* After a prom soundtrack full of ’90s tunes, Riverdale went back to that glorious decade again, with Archie performing a cover of Green Day’s “Good Riddance (Time of Your Life)” for the graduation ceremony. Although he could’ve picked an even more thematically appropriate song: