Five seasons in, Riverdale can still serve up some pretty surprising twists — and this week’s episode had a real doozy.

Betty and Jughead are still on the trail of the video auteur, and she gets a late-night call from Bret in prison, who offers her some vital information in exchange for a transfer to solitary. By the time they get to the prison, though, Bret is found dead in his cell. (Not only was he stabbed multiple times, but his eyes were gouged out. Ew.) Charles thinks the auteur put out a hit on him, and their prime suspect — video store creep David — is still on the run. But that trail goes cold when they find David’s dead body hanging from a noose in the cabin. Got any other theories?

Betty gets another late-night call — let her snuggle with Jughead in peace, people! — this time from Donna, who’s worried she’ll be next after her classmate Joan was also killed. (“Now we have a preppy murderer on the loose?” Jughead wonders.) They also get a fresh videotape, which proves David wasn’t the auteur, and this one goes inside the Cooper/Jones house to film Betty and Jughead sleeping in bed… and Jellybean, too, with the auteur dragging a knife against her cheek. F.P. and Alice hustle them away to a hotel, but Betty wonders how the auteur had such access to them. A light bulb goes off, and she goes back home to confront… her brother Charles.

“You got sloppy,” she tells him, revealing the bug she found on her phone. He confesses to killing Bret and Joan — his boyfriend Chic took care of Bret behind bars — but he said he only did it to protect Betty. (Plus, “I only kill people who deserve it.” Oh, OK, then!) He insists he’s not the auteur, though, and Jughead gets a light bulb of his own. He points the finger at… his sister Jellybean! She admits she cooked up the videotape mystery with her friends as a way to keep Jughead in town so he wouldn’t leave her for Stonewall Prep and college. (Aw, that’s weirdly sweet… but mostly just weird.) She begs F.P. for forgiveness, and Jughead is actually impressed by her filmmaking skills. Congrats, Riverdale; I did not see that one coming. 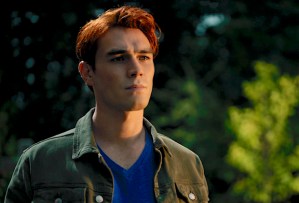 A WORLD OF HURT | Archie is struggling after seeing that video recreation of his encounter with the Black Hood; he angrily punches his heavy bag and sobs at his father Fred’s grave. Hiram twists the knife further when he attacks Archie for breaking Veronica’s heart and scoffs that “the apple doesn’t fall far from the tree,” which sends Archie into a blind rage. (Mr. Keller has to hold him back.) Making things even worse, Mary tells Archie that lawyers for George Augustine — the man who confessed to hitting Fred with his car and killing him, even though his son really did it — want Archie to write the judge a letter asking for leniency. Archie can’t bring himself to do it, though.

George shows up at Archie’s gym: His son confessed to the crime, and he’ll be tried as an adult, so now he needs a letter from Archie. But Archie can’t do it. He tells George he’d never would’ve left someone dying in the road like his son did. And when he finds Mary watching the auteur tape in horror, he smashes the tape and destroys the TV with a baseball bat for good measure. Mary calls in Uncle Frank for help, and Frank encourages Archie to let out his anger by beating him bloody. They end up hugging, with Archie apologizing, and they visit Fred’s grave together. Archie agrees to write a letter asking the judge to give the Augustine son a second chance — and Frank agrees to finally turn himself in.

* Veronica and Hermosa attempted a hostile takeover of Hiram’s criminal enterprise, but Hiram refused to give in: “All I need to do business are my fists and a gun.” Hermosa hired some goons to rough up Hiram — and this time, Veronica refused to come to his aid. So Hiram agreed to hand over business operations to Hermosa while Veronica goes to Barnard and he and Hermione escape to the Caymans. Except Hermione’s not going: She announced she’s divorcing Hiram and moving to New York to become a Real Housewife! Can’t wait to see her tangle with Ramona and LuAnn. 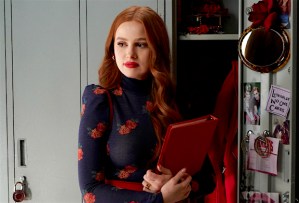 * Cheryl was wheeling and dealing, too: After seeing her pitch to revive the family maple syrup business shot down by her bitter relatives, she got the last laugh when Penelope poisoned them all, leaving her in charge of the Blossom empire. Penelope called it “an early graduation gift.” Sure beats a car!

* We did get a hint about the auteur’s identity when we saw Jellybean sulking after Jughead announced he got accepted into the University of Iowa’s prestigious writers’ workshop.