We know the Riverdale gang is very busy trying to keep their hometown from being destroyed… but we’re still thinking about who was in the shower together.

Archie and his pals are back in their old booth at Pop’s, with Archie trying to rally them to help him save Riverdale, but they’re all just trying to avoid talking about their real issues. Betty and Jughead are awkward together — they apparently haven’t spoken since he left her a mysterious voicemail the night of his book launch — and Archie notices the wedding ring on Veronica’s finger. She says Chad is a great guy, but she also encourages Archie to enjoy his time as a single man, because “once you’re married…” (Oof.) 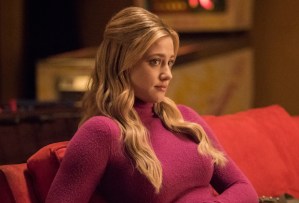 Things are awkward at the Cooper household, too: Betty finds her mom Alice running herself ragged trying to take care of Polly’s twins while their mom is out all night. Polly claims she’s working at a local nightclub, but Betty the snoop quickly sniffs out that she hasn’t worked there in a year. Jughead is desperate for cash, with debt collectors stalking him all the way to Pop’s, so he takes a job there waiting tables. (He should get a discount on burgers that way, at least.) And Principal Weatherbee tells Archie they may not be able to open the high school after Hiram slashed their budget to shreds.

The school board is meeting to decide Riverdale High’s fate, and Toni enlists the gang to convince the board members to keep it open. Hiram has other ideas, of course: He offers to give the students a free scholarship to Stonewall Prep, and even offers Toni a cushy counselor job there, but she doesn’t budge. Veronica is looking for a new career path: She entertains a job as a sports agent in L.A. before cashing in her jewels at a pawn shop and trying to buy a getaway car from auto dealer Reggie. She asks Hiram to get her jealous husband to back off, but he turns her down cold, still holding a grudge about the way she treated him pre-jump. 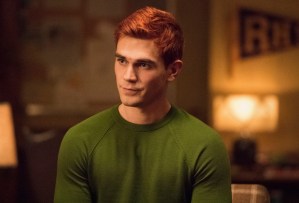 But let’s get to that shower scene, yeah? Archie is angry that the Ghoulies have turned his old house into a drug den, and after he spots Polly in there, he gets Betty to join him as he pulls off a surprise raid with Sheriff Keller and a couple of Serpents, busting heads and uncovering a stash of Jingle Jangle. After the raid, Archie wants to clean himself up, and so does Betty… and so they take a shower together, along with a steamy make-out session (!!!). They both agree they’re just friends “having fun” — didn’t she have a boyfriend at the FBI, though? — but they also agree not to tell anyone about their tryst just yet. Yeah, because that worked out great last time.

Riverdale High’s teachers are leaving en masse for Stonewall, and Toni stumbles upon Hiram’s plan to shut down the school and unincorporate the whole town, to boost his pricey SoDale development. Toni suggests the school go private, and she turns to Cheryl for the necessary funding. That gives Archie an idea: He pitches his friends on them all coming home to be teachers at the new Riverdale High, just for a few months until Weatherbee can find permanent replacements — and surprisingly, they all get onboard. The gang is back together again! 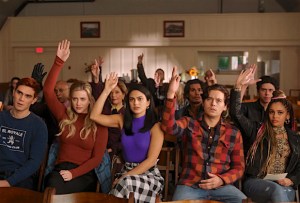 Toni unveils their grand plan at the school board meeting… but Hiram takes the wind out of their sails by calling a vote to unincorporate the town, and he has the votes locked down. Riverdale is officially dissolved. Veronica and Chad fight via video chat, with him calling her decision to stay in town “absurd” and her demanding that he unfreeze her credit cards. Jughead comes over to crash with Archie at his house — and we see Polly, who Betty can’t seem to get a hold of, running away from that truck with the scary skeleton on the front. Uh-oh… is this the “tragic fate” of a “major character” we were warned about? 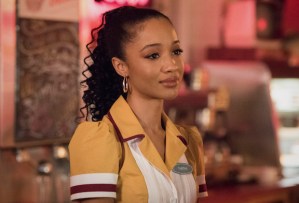 * Pop Tate retired, and the gang sent him off in style, with Archie giving him an honorary letterman jacket and Jughead writing a sweet tribute. And his granddaughter Tabitha is a bit of a firecracker, isn’t she? I’m liking her addition to the cast… and I’m already sensing a vibe between her and Jughead.

* The post-time jump Riverdale does have a distressing lack of Cheryl Blossom, though, doesn’t it? We get it: She’s sad and isolated… but we’d also like to see her back to her old Cheryl Bombshell self again, soon, please.

* Jughead’s next book idea turned out to be… the story of Pop Tate, based on the tribute he wrote for Pop’s retirement ceremony. (His publisher loved it.) Plus, we learned his debut book was based on the Serpents — sorry, “the Vipers.” He’s gotta start paying these people royalties soon, right?

* Riverdale High only has a hundred students? Total? Kind of seems like hiring a handful of tutors would take care of it.

* What kind of pawn shop has $30,000 in cash on hand? Especially one located in a rapidly declining small town?

* “Veronica Gekko” just sounds all kinds of wrong, doesn’t it?