Riverdale‘s long-awaited time jump is finally here, and Wednesday’s episode found our characters older… but not a whole lot happier.

We pick up seven years later, with Archie and his friends scattered around the country and doing varying levels of #adulting before coming back to their old booth at Pop’s for an uneasy reunion. TVLine chatted with executive producer Roberto Aguirre-Sacasa about what’s next for the gang… and how worried we should be about that trucker we glimpsed at the very end. But first, let’s check in on where everybody is after the time jump: 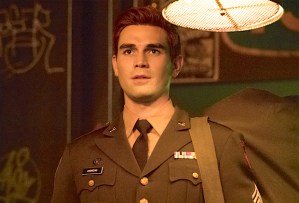 ARCHIE | When we first see our favorite redhead, he’s giving a locker room pep talk before he and his fellow Army soldiers take heavy fire on a battlefield that looks a lot like Riverdale High’s football field. But it’s just a dream: He wakes up in a military hospital, and a superior officer orders him to go home to Riverdale to restart the high school’s ROTC program. Archie heads straight to Pop’s and goes downstairs to find the speakeasy has become the newly revived Whyte Wyrm, with Toni singing and dancing. She’s pregnant — and not saying who the father is yet — and she and the reformed Serpents bought the place from Hiram. Like Archie says, “a lot has changed” around here…

BETTY | She’s in full Clarice Starling mode, running through the woods as a FBI trainee. She’s also seeing a therapist after suffering “severe trauma” at the hands of the so-called “Trash Bag Killer.” Betty insists she’s fine (“I caught serial killers in high school”), but she’s having gruesome nightmares with severed limbs and a crazed man wielding a chainsaw. She admits she “messed up, big time” — she didn’t wait for backup and ended up getting captured by the Trash Bag Killer and held captive for two weeks, after which he escaped — and she wants to redeem herself by catching him. Oh, and she has a new boyfriend: a FBI colleague named Glen. When she gets a call from Archie, though, she puts Glen in charge of her cat and heads back to Riverdale. 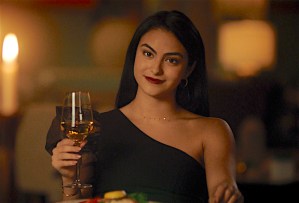 VERONICA | She’s celebrating her one-year wedding anniversary with hubby Chad (played by Broadchurch‘s Chris Mason), but the newlywed bliss has worn off. She misses working as a Wall Street trader alongside Chad (“They called me the She-Wolf of Wall Street”), and now she sells jewelry at a shady, Uncut Gems-y outfit. She’s lying to Chad, who thinks she’s working at a nice department store, and they have a big fight when he finds out. She misses how they used to be (“The sex was amazing”), but “the accident” changed everything: They both narrowly survived a helicopter crash, and he didn’t want her going back to a stressful Wall Street job. Ronnie complains to her mom Hermione — who’s taping her Real Housewives tagline! — that Chad just wants her to be “a baby-making machine,” and when he gets her a “Glamerge” egg as a peace offering, she turns around and sells it at her shop. Soon, Archie’s name pops up on her phone, too…

JUGHEAD | He’s living the life of a writer: living on pizza and booze in his messy New York City apartment and screaming at his typewriter. He’s got a bad case of writer’s block, and his agent warns him he needs to get to work on his second book, or he could lose his advance. (Plus, he’s getting evicted, and dumped by his girlfriend. Who is not Betty.) He stumbles into a bar and gets approached by a grad student who loves his first book, and he takes her home. The next morning, though, she reveals she has a novel of her own — and when she helps him sidestep a rough-looking pair of debt collectors, she threatens to rat him out if he doesn’t read her work. So he’s not exactly riding high when his call from Archie comes through. 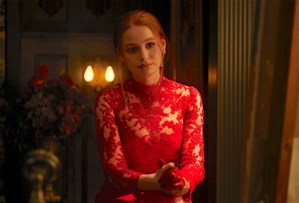 CHERYL | Back at the Whyte Wyrm, Toni explains that she’s now the guidance counselor at Riverdale High, and Kevin and Fangs are still together — but she and Cheryl aren’t. Toni tried to reconnect with her ex, but Cheryl blew her off, preferring to stay cloistered at Thorn Hill with Nana Rose. Cheryl thinks she’s “doomed to a life of unhappiness,” and believes if she keeps renovating Thorn Hill, the curse can’t fully consume her. Meanwhile, Hiram (and new lackey Reggie!) tried and failed to buy Cheryl’s maple groves, and Nana Rose wants Cheryl to use her newly honed painting skills to reproduce fakes of famous (and valuable) paintings.

Toni takes Archie on a sad tour of a decimated Riverdale: Buildings are vacant, Skid Row is overflowing and Archie’s old house has been trashed by the Ghoulies. Hiram is trying to clear out Riverdale so he can build a freeway to help his pricey SoDale suburb thrive. So Archie calls Betty, Veronica and Jughead to a booth at Pop’s and tells them Riverdale is “dying” and they have to save it. And speaking of “dying”: A waitress from Pop’s hitches a ride with a trucker who has a scary skeleton on the front of his truck — and we have a bad feeling about this.

Whew, that was a lot to process, huh? It left us with plenty of questions, so we turned to Aguirre-Sacasa for answers. Read on for more on Betty’s quest for the Trash Bag Killer, the chilly vibe between her and Jughead — and why that trucker could spell doom for a beloved character.

TVLINE | When Archie comes into Pop’s and tells the other three they’ve all got to save Riverdale, it doesn’t look like they’re as into it as he is. Are they going to be more reluctant to jump onboard
Exactly. We thought it was very Archie of Archie to say, “Guys, we’ve gotta save the town! Let’s put on a show!” And we thought Betty, Veronica and Jughead would be like, “What are you talking about? We have lives elsewhere.”… Their reluctance to go all in with Archie felt real, and it felt like that was the first big story we had to tell, which was to figure out a way that these characters would come to Riverdale and reinvest in Riverdale, a place where a lot of their times were fraught and not necessarily amazing. 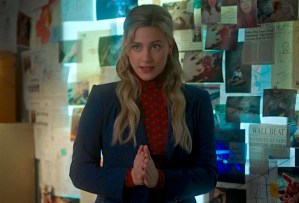 TVLINE | Jughead is a writer struggling with his next book, and it looks like he’s lost touch with everyone, including Betty.
One of the fun things about the time jump is that we see the kids have kind of gone their separate ways, and a more human mystery is: Why didn’t they stay in touch? How did they drift apart? Probably the biggest mystery is what transpired between Betty and Jughead, that they so completely are out of each other’s lives.

TVLINE | At the end, we see a waitress from Pop’s getting into a truck, and it looks like we might have another serial killer on the loose in Riverdale. So that’s another mystery we’ll see playing out this season?
Definitely. That is one hundred percent. I think it’s in the next episode that you’ll see that mystery is really entwined with the possibly tragic fate of one of our major characters that we’ve known since Season 1.

Got thoughts on Riverdale‘s big time jump? Grab a booth in the comments below.