It’s a little past the holiday, but Tommy’s appearance in Power Book II: Ghost‘s Season 1 finale certainly could fall under the heading of “canceling Christmas.”

After all, Ghost’s best-friend-turned-biggest-enemy returns to New York with the express purpose of killing Tasha, who named him as Ghost’s killer during her murder trial earlier in the season. (And didn’t we tell you that Joseph Sikora likely would be back?)

But when Tommy is unsuccessful in his first attempt, Tariq turns things around and comes up with a plan he says will help them all. So he engineers a car chase in which Tommy appears to be following a recently sprung-from-jail Tasha, the Feds are actually following Tommy, and the whole thing ends in an explosion that makes it look like Uncle Tommy is dead and gone. (He even tosses a few molars into the wreckage to ensure that there’s DNA proof of his demise.)

Though Tommy tells Tariq he’s going to leave New York, he secretly plans to take another whack at Tasha out before she, Yaz and Tariq make a run for it. But Tariq, knowing better than to trust his seriously angry uncle, calls in a threat on Tasha’s life that causes the Feds to rush her into Witness Protection sooner than planned. So Tommy is thwarted… and then thwarted again when Monet (!) stops him from killing Tariq at Ghost’s gravesite by putting her gun to his head and telling him to shuffle along. 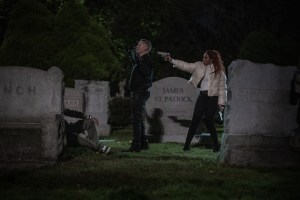 “Let’s go,” Monet tells Tariq after Tommy is gone. “The family is waiting.”

And that’s only one of several huge developments that happen during the hour. You might be wondering how Tasha is now a free woman? That’s because when Tariq took the stand in his mother’s trial, he said that Saxe was tracking him illegally and hinted that he was going to blow up Saxe and MacLean’s unethical alliance. So with Ott pulling the strings, Tasha names Tommy as the head of the drug operation in exchange for Witness Protection for her and Yasmine… but not Tariq. (Hence her plan to run with him.)

Another big moment: Tariq kills Jabari, who’d figured out that ‘Riq was selling drugs and was connected to Dru. Cane overhears the conversation and shoots Jabari, who thinks that Tariq is a snitch. Cane is also about to shoot Tariq, but young St. Patrick convinces him to let him fix everything — including his murder of Officer Ramirez. So Cane gives him Ramirez’s gun, and Tariq kills Jabari, who was planning to write a book about Tariq’s illicit activities. (The money Jabari was planning to give ‘Riq, by the way, conveniently pays off Tariq’s debt to Monet.)

TVLine turned to series creator/ executive producer Courtney Kemp and executive producer Curtis “50 Cent” Jackson to run down the finale. In separate interviews, they broke down Tariq’s big moves and Tommy’s explosive return. Read on for their take on “Heart of Darkness.” 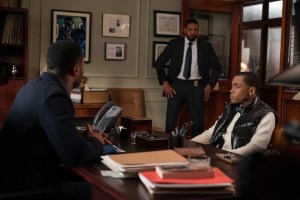 TVLINE | Tasha goes into Witness Protection at the end of the episode. What can you tell me about Naturi Naughton’s presence on screen in Season 2?
KEMP | What I will just preview a little bit is that Tariq has done this thing, he’s made a decision to save her life, but he will have no control over where she is or what she’s doing. So, when we get to the beginning of Season 2, there’s definitely a feeling from Tariq of, “I would like to know where my mother is,” and I think I’ll leave it with that. 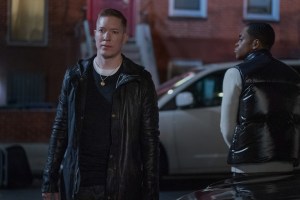 TVLINE | Everyone thinks Tommy is dead. That is a pretty blank slate for someone like him. Going into Power Book IV: Force, what can you tell us about his future endeavors?
KEMP | Well, there were a couple things we wanted to do. I wanted to free the character up so he could do whatever he wanted, and I wanted him to be able to move around the country. Remember that old Southwest commercial, “You are now free to move around the country?” I wanted him to do that. So that’s part of it. But part of it also was to resolve the issue of Tasha actually having to testify against him. That was something I wanted to be really clean for the audience: That’s not going to come up again. Her having to actually testify against Tommy is not going to come up again, and that was part of Tariq’s plan, to clean all of those things up.

TVLINE | Monet essentially chooses Tariq over Cane in this episode. It seems like it hurts him in a huge way.
JACKSON | [On Power], I said, “If I play a character, I want to play the worst person they’ve seen on television.” And it’s being matched now, with Cane. It’s a little different in his character, because by default, he’s doing the wrong thing with innocence connected to it. My character was doing those things with malice because I was trying to take everything back. It was all mine, so to speak. [Laughs] I think it was a mistake to name Cane so close to Kanan. [Laughs]

TVLINE | Let’s talk about Carrie for a minute. Please forgive me, because I cannot remember from the beginning of the season: Did we know she was a former prosecutor, or is that something that we just learned in these last couple episodes?
KEMP | It’s there very early on, but it’s not there much.

TVLINE | How sure do you think she is that she’s doing the right thing by shielding Zeke and running interference in this murder investigation?
KEMP | She is totally flying by the seat of her pants, and the cover-up is worse than the crime, always. So, what does that mean? You shouldn’t have been sleeping with a student, dude! [Laughs] That was a really bad call…

It’s super important to see Carrie, always, as someone who is a super high achieving addict. So, she makes a lot of terrible decisions. I love characters like that. What’s so funny though is, the audience was like, we hate these characters, we hate these professors, and now, they’re starting to see what the purpose of those characters was all along, which was always planned. I think there’s a lot of people like Jabari, who want to step in and help a young kid, but then they end up wanting to help themselves. Or a lot of people like Carrie, who from the beginning, you met this bleeding-heart person who was trying to help all these kids, but then she helped herself, basically, to some d–k. Girl! What are you doing? Do you know what I’m saying? [Laughs] It’s really important. Right? By the way, you can print that. That’s fine.

Now it’s your turn. Grade both the Power Book II: Ghost finale and the season as a whole via the polls below, then hit the comments with your thoughts!