Last Man Standing‘s final season premiere spent little time quarantined with the Baxters before it jumped ahead to a post-COVID world, where Mike and Vanessa had not one, but two new grandchildren: Mandy and Kyle’s firstborn Sarah (played by newcomer Sophia McKinlay), and Kristin and Ryan’s second child, a daughter named Evelyn.

The latter was mentioned but not seen during Sunday’s episode, which saw the long-running Tim Allen comedy jump ahead to the year 2023 to avoid stories set during the pandemic. As showrunner Kevin Abbott previously told TVLine, “People are depressed enough without having to look for us to be depressed,” hence the decision to sidestep COVID-19. “[The time jump] allowed us to tell stories from a positive point of view while addressing the impact [the pandemic has had] on our characters,” which viewers will see more of in subsequent episodes.

Below, Abbott expands on the decisions to jump forward in time and keep Kristin and Ryan’s daughter off screen, and “spoils” the episode that LMS fans won’t get the chance to see.

TVLINE | When we last spoke in April, production had been shut down one episode shy of completing Season 8. But you already had a script written, which featured the birth of Kristin and Ryan’s daughter…
My God, that’s right!

TVLINE | The premiere we saw tonight was not that episode. When did it become apparent that you had to toss the script and start from scratch?
Pretty early on. Unfortunately, things had changed too much, and it just was becoming a pain. Too much of the script would have to change anyway. And then at the end of the day, we didn’t have Kaitlyn Dever. She couldn’t make it back because of everything that was going on, so it made no sense. She was a major player in that episode.

TVLINE | How much debate was there about whether or not to incorporate the pandemic? And how much you’d focus on it before you moved forward?
The biggest question we had coming into [Season 9] was, “How do we deal with everything that’s going on?” The pandemic, the social justice movements, the economic downturn, the election… a lot of unknowns. And coming back in January, we’re looking at it going, “OK, there are already going to be other comedies on the air. By the time we get back, we’re going to be the equivalent of airline food jokes,” you know? It’s going to be really warmed over stuff. That kept me up for a couple of nights [because] it wasn’t just one event we were trying to forecast. It was many, many events that could go any direction.

TVLINE | How did you land on the decision to do a three-year time jump, to a post-COVID world?
My writers pitched [the time jump], which I just adored. I think our mission is to be positive, and to show people the humor in life’s situations. I enjoy the darker episode every now and again, but generally, we want to entertain.

TVLINE | And on a multi-camera sitcom, you’re probably thinking in terms of syndication, “Who’s going to want to relive COVID?”
Yeah. I mean, I’ve been doing this for a long time now, and I’m always aware of that, that hey, a show like this is going to continue to run for a long time, and what seems interesting and current now can seem very dated and uninteresting later on. And we’re a smaller show. We tell small stories about life and family. I’m OK with telling stories about this event that changed [us] in such a way. Here’s the story we’re telling because of that. That, I think, is our mandate. 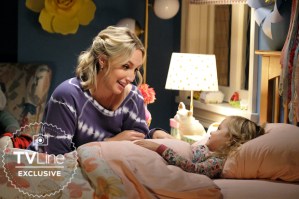 TVLINE | Was there any other reason for the time jump, beyond COVID?
Part of it, quite honestly, was [avoiding] having babies on the stage. And that, in some ways, is practical from a storytelling point of view. When you have new parents [on a sitcom], it breaks reality constantly because new parents are only with their babies — that’s it. The babies demand their attention 100 percent of the time, so it limits what the characters can do unless you want to believe that they’re horrible parents, or you make an excuse every time they enter the room, like the baby’s just down for a nap.

TVLINE | Neither Sunday’s premiere nor Episode 2 — aka the Home Improvement “crossover” (airing Thursday) — introduces Kristin and Ryan’s daughter, who would have been born at the end of Season 8. She does exist, though… right?
Well, that was the episode that’s never going to be seen. [Laughs] Her name is Evelyn. 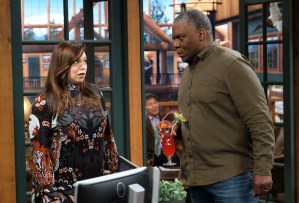 TVLINE | She was mentioned during a conversation between Kristin and Chuck, but you never specified who Evelyn was. I thought Kris was referring to Eve.
She was named after Eve. It was a great, lovely story [that we had planned for our scrapped Season 8 finale], where Eve finds out that Kristin names her daughter after her. Like with Sarah, we’re probably not going to see a lot of Evelyn, but [these children] impact our characters and what they’re doing with their lives.

TVLINE | The future version of Mike seems a bit older, a bit wiser, a bit more reflective about what he has and what he stands to lose — especially when it comes time for Mandy and Kyle to move out again. Is that what you were going for in that final scene between father and daughter?
You nailed it, absolutely nailed it. Yes, we were. Mike has been affected by everything that’s gone on as well, and part of that is recognizing that we’re not guaranteed anything, you know? We’re not guaranteed time, we’re not guaranteed family, and Mike is starting to think in terms of his post-Outdoor Man [life], you know? He’s thinking about his family. The premiere episode is all about recognizing that that fatherly instinct never goes away. You still want to protect your kids no matter how old they are. This final season is going to be about Mike’s journey more than almost anything else — where Mike is going to end up at the end of this season, and what that means for him going forward.

What did you think of Last Man Standing‘s time-jumpy premiere? Grade it via the following poll, then drop your thoughts in a comment below.