Thursday’s Last Man Standing featured the return of a beloved character and teased the arrival of a new edition to the Baxter family.

In the episode, Eve (former series regular Kaitlyn Dever) returned home for a weekend visit from Air Force Academy. To celebrate, Vanessa tried to recreate a childhood tradition for the girls sans Mike, but plans were put on hold when Kristin went into labor.

The Tim Allen Comedy was one of 100+ shows that was forced to halt production due to the coronavirus pandemic. Below, Allen and executive producer Kevin Abbott walk us through their makeshift finale, then tease what’s ahead in a potential Season 9.

TVLINE | How relieved were you when you realized you had something resembling a finale when you found out you weren’t going to be able to shoot Episode 22?
ALLEN | I was pleased… It’s kind of the pseudo-finale. Our tee-up show, if you will. [It] sets up for a great premiere for a potential Season 9.
ABBOTT | It’s funny, because I was talking to [fellow executive producer] Matt Berry about that. When the question had come up, [and] there was a possibility we could shut down [before we shot Episode 22], I said, “I don’t want to shut down. [Episode 21] is a really good show, but it’s not a season finale. We end on Kristin going into labor. You can’t end a show on that.” Well, you totally can… I’d [just] hate to do a cliffhanger for the audience and then not get picked up and that’s the end of the series, you know? 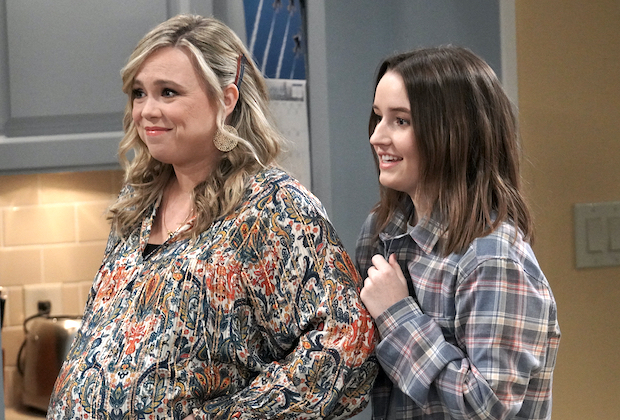 TVLINE | Take me back to what it was like on tape night. Did you guys have any sense at the time that you’d be forced to suspend production after Episode 21? Or did it feel like a regular tape night?
ABBOTT | It felt like a regular [tape night]… You’re in a bit of a bubble when you’re in production like that, especially towards the end of the season. We finished the script, the draft for [Episode 22], the day before. I think it was Thursday that the question became “Do we not have an audience?” but it wasn’t “Do we shut down?”
ALLEN | It got up to late Friday in the afternoon and everybody said we’re coming in on Monday. We’ll tape Monday and Tuesday, [and] that’ll be our final show. Kaitlyn Dever was back for the last two, which was great, then Fox said we just can’t take the chance if someone got sick. So we had to back up.
ABBOTT | We had also [figured out a way to] shoot everything Monday, so it was about as close as you can get to the finish line without getting there.

TVLINE | In this episode, Mike and Vanessa are especially excited to have Eve home for the weekend. In the writers’ room, is there that same sense of excitement getting to write for Kaitlyn Dever, and for Eve again, after so much time away?
ABBOTT | Absolutely. We so love to have Kaitlyn around. Any time we get her back, she’s a delight, you know? I mean, as a person and as an actress, she just brings us that energy and an attitude [with Eve] that we don’t get in other characters, so it’s so refreshing. It gives everybody a boost.

TVLINE | The father-daughter relationship between Mike and Eve was such an integral part of the show during those first six seasons, so it must be nice to get to write those scenes again.
ABBOTT | Exactly, and [Episode 22] was [going to be] very Mike and Eve-centric… If we get picked up again next year, I’m certain we will always try to have [Kaitlyn] at least at the beginning and the end of the season because she can commit more to that. We try to get her in the middle [of the season], but she’s very successful, so it’s all just dependent on her schedule. 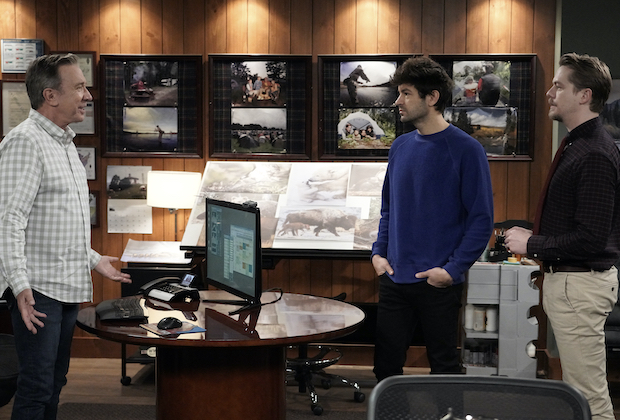 TVLINE | We’ve all previously spoken about the longevity of the show (and how it might outlive Home Improvement). When you have an episode like this, so much of which is built on the history these characters have with each other — whether it’s Mike’s relationship with Eve, or his relationships with his two sons-in-law — do you take a step back and reflect on just how far everyone has come?
ALLEN | Sometimes, all of us will look at each other and think of the girls when they were younger and the travails this show has gone [through].
ABBOTT | While I enjoyed [these characters] as they were growing, certainly to see how far they’ve come, to have that rich history behind them, is a marvelous thing. In many ways it’s easier [to write the show now] because they’re more complex. It gives you a lot more room to play, and I think especially things like with Ryan and Mike, the development of [that] relationship, and the whole Mandy and Kyle relationship… To go from where Kyle started off, to his and Mandy’s relationship, is kind of phenomenal, you know? In the pilot, he dated Kristin! He’s come a long, long way.

TVLINE | We haven’t seen much of Boyd this season, but I figured he would have been at the hospital with the rest of the family after Kirstin went into labor. Would he have been there in Episode 22 to meet his baby sister?
ABBOTT | Actually, the actor [Jet Jurgensmeyer] had another commitment. He’d asked to do another show, so we had let him out…

TVLINE | Huh. Does the character still exist in the canon of the show?
ABBOTT | Absolutely. 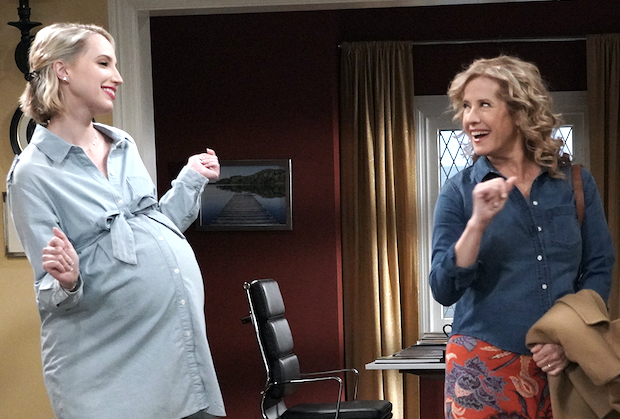 TVLINE | We found out in the previous episode that Mandy is pregnant. What excites you about that storyline — and how will it differ from Kristin’s pregnancy this season?
ABBOTT | With Kristin, our focus was much more on the fact that this was a different pregnancy for her than [when she had Boyd], so we came to call it the “no-shame pregnancy.” You know, this was a pregnancy [that Mike and Vanessa] got to brag about, as opposed to, you know, embarrassingly telling your friends that [your] high school daughter is pregnant. And the history of the Ryan and Kristin relationship is obviously more froth than the Kyle/Mandy relationship, so it’ll be interesting to see what [having a kid] does to the Mandy and Kyle relationship.

TVLINE | Last Man has always been based in reality. Have you given any thought to whether you would want to address the current pandemic in some way if you get picked up for Season 9?
ABBOTT | Well, there are so many unknown factors at the moment, and chief among them being you know, football. If Fox doesn’t have football in the fall, what does that mean in terms of where they might place [us on the schedule]? If they did the same thing as this year, then we’d be coming on in January, which is very problematic in terms of writing a show in August and trying to predict what might happen. That’s going to take a lot of thought because, I mean, whatever world we wake up in in January is going to be markedly different, and we would like to reflect that. 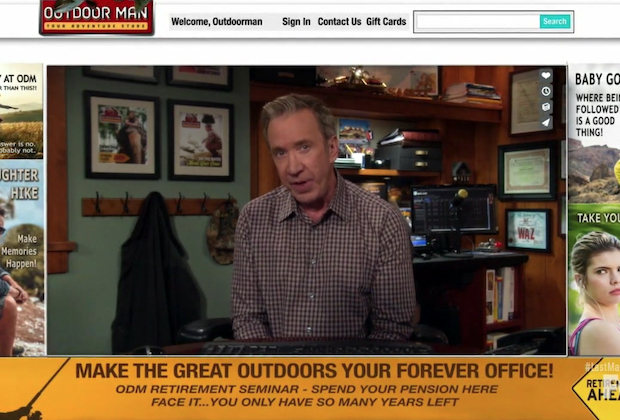 TVLINE | Do you think you’d be able to pull off a virtual episode in quarantine?
ALLEN | Oddly enough, we did a Mike Baxter vlog in quarantine. I believe it’s in tonight’s episode, and we’ve also done some ancillary [Outdoor Man] vlogs that are [on the] internet. We shot them on a set in my office. It’s a real clever way to do it.
ABBOTT | One of them wound up in the last episode. We did it to address the situation a little bit, in terms what is happening with the virus and everything. It started off because there was a joke in [the original script] that suddenly could be read in a different light, and we didn’t want [it to] read as a virus joke. It was not intended to be that way, and so for the sake of caution, we just wanted to change that.

TVLINE | As of now, is the plan to use the script you originally intended for the finale and have that serve as your Season 9 premiere?
ABBOTT | Yes. If we get picked up, that’ll be the first episode we do… If God forbid the show wasn’t picked up, I would hope that script gets out there so that people can at least get a sense of what happened in the episode, because it’s really good.

What did you think of the Last Man Standing finale — and Season 8 overall? And what are your hopes for Season 9? Weigh in via the following polls, then hit the comments to flesh out your thoughts.