Last Man Standing‘s future-set final season takes place in a world where the coronavirus has largely been eradicated — but there will still be ripple effects felt throughout the remaining episodes of the Tim Allen comedy.

When the Fox sitcom picks up in the year 2023, viewers will see how the global pandemic took its toll on the economy and how that’s impacted the Baxter family’s livelihoods.

“Ryan is one of the winners of the pandemic,” showrunner Kevin Abbott tells TVLine. “The pot shop took off during the pandemic. People need their weed when they’re all stressed out.”

Soon enough, the Bud’s Buds owner is approached by Big Pharma. “We see whether or not Ryan is going to become a corporate guy,” Abbott teases. “He starts to become [more of] a capitalist, and we see how he deals with this challenge to his principles.”

His wife, Kristin, isn’t as lucky. “Kristin, who runs the Outdoor Man Grill, is one of the losers in the pandemic,” Abbott reveals. “Restaurants did not do well, so there becomes this crisis: Do they close the grill down or not? And how does Mike, as a father, deal with an area of the store that is underperforming when the person in charge of that is his daughter?” 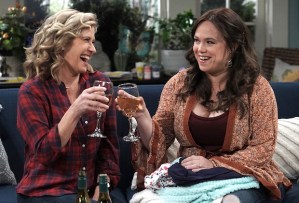 Meanwhile, Mike’s wife Vanessa will have her hands full as education czar for a local assemblywoman: “She’s dealing with the aftereffects of school shutdowns.”

Last but not least is Jen, who returns to Colorado in Episode 4 (airing Thursday, Jan. 21) following an extended return home. “She went back to Hong Kong, and she comes back when it’s safe to travel again,” Abbott says. “It’s an interesting story… Things were happening in Hong Kong [during the pandemic], so it deals with that a little bit.”

Last Man Standing Season 9 premieres on a special night, Sunday, Jan. 3 at 9:30/8:30c, before moving to its regular time slot — Thursdays at 9:30 pm — beginning Jan. 7 (with the big Home Improvement crossover). In the meantime, hit the comments with your hopes for the final episodes.