The extent to which Jonah is struggling to move on from Amy will be explored in the new year, when the Superstore employee is confronted by another ghost of girlfriends’ past.

As previously reported, Kelly Stables is set to reprise her role as Jonah’s ex in the NBC comedy’s sixth and final season. In TVLine’s exclusive first look photos above and below, Jonah looks rather confused when he comes across Kelly, which begs the question: What is she doing back in the Ozark Highlands store?

In the Jan. 28 episode, “the employees start to worry about Jonah’s emotional state,” so Mateo, Glenn and Sandra take it upon themselves to help him look beyond his relationship with Amy, according to the official logline. Elsewhere, “Cheyenne is forced to shadow Carol for the day, while Garrett helps Dina search for a secret location in the store.”

Stables was first cast in Season 3, and went on to appear in 22 episodes. Kelly and Jonah eventually coupled up and moved in together, but Jonah broke things off when he realized he couldn’t shake his feelings for Amy. Following their breakup, Kelly transferred to Cloud 9’s Fenton store, but continued to make the occasional appearance. She last popped up in Season 5’s Halloween episode.

Her return comes less than three months after America Ferrera’s Superstore farewell, which culminated in Amy and Jonah’s conscious uncoupling. After an emotional discussion in the stockroom, Jonah and Amy realized that they wanted different things: Jonah was ready to get married (and had secretly taken one of Amy’s rings to determine the right size for an engagement band), while Amy wasn’t ready to fully commit, still haunted by what she gave up when she agreed to marry Adam all those years ago.

NBC confirmed earlier this month that Superstore would close up shop after six seasons (and 113 episodes). It was later announced that the network is in early development on a potential Bo & Cheyenne spinoff, starring Johnny Pemberton and Nichole Sakura.

Superstore returns Thursday, Jan. 14, in a new time slot, 8:30/7:30c, where it will now follow the Ted Danson comedy Mr. Mayor. In the meantime, hit the comments and tell us if you’re looking forward to Kelly’s return. 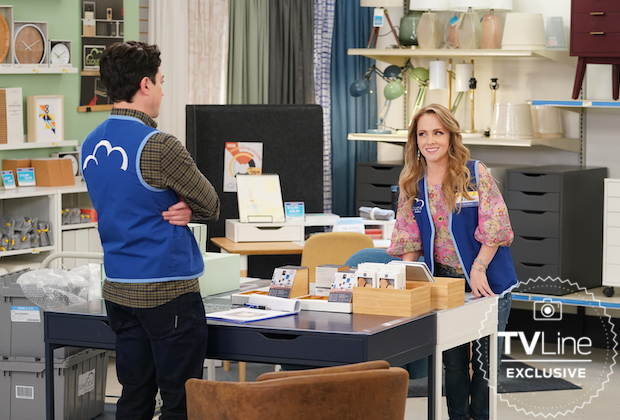