Early on in Thursday’s Grey’s Anatomy midseason finale, it looked like Meredith was well and truly out of the woods. As Maggie told Winston, her sister was not only awake, “she even laughed.” But, of course, on this ABC drama, appearances can be (and usually are) deceiving. So by the end of the hour, Mer had… well, keep reading; we’ll get there and, on our way, go over Owen’s reaction to Teddy’s difficult confession, the big shock that gets delivered to Maggie and the blast from the past that starts DeLuca playing a dangerous game of chase. 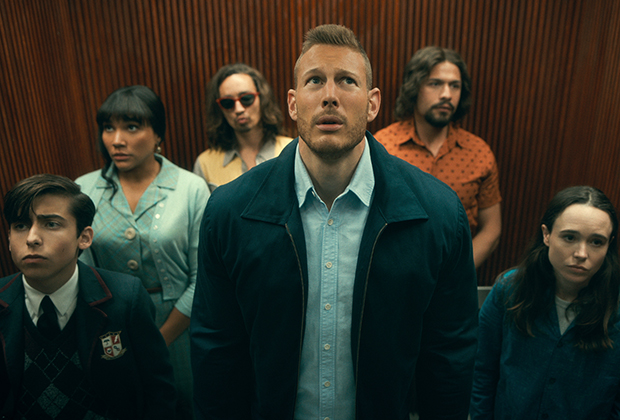 ‘WHO SLAPPED YOU WITH A HAPPY STICK?’ | As “No Time for Despair” began, Maggie was taken aback when Winston joked that he just wasn’t cut out for a long-distance relationship and abruptly ended their call. (Are hangups becoming his thing?) Still, nothing could dampen her spirits now that Mer had awakened. That news even cheered up Tom, who was basing his chances of recovery on Grey’s. If she was gonna make it, he cracked, “maybe I won’t die alone and forgotten.” Nearby, Jo attempted to broach the subject of her career change with Richard, but he had much bigger fish to fry: Owing to the pandemic, Seattle Pres had reached capacity, meaning that Grey Sloan was about to get twice the expected number of incoming patients. Despite that, he encouraged Bailey to go home and grieve for her mother. But just as he hadn’t been able to leave the hospital when it needed him, neither could Miranda abandon ship. Really, Teddy was the doctor who seemed most in need of a breather. After she barked at Webber that “taking a break won’t save anyone, and I don’t have anywhere to go, anyway,” he called her on her [bleep]. Her situation with Owen, he said, “that’s on you, and you know it’s on you.” Instead of feeling sorry for herself, she needed to take stock to ensure that she’d repeated the destructive pattern that had blown up her life for the last time. 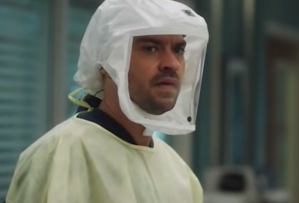 ‘THE COAST IS CLEAR DOWN HERE FOR SATAN’S ARRIVAL’ | Meanwhile, the hospital braced for the arrival of Bob, the subhuman who’d kidnapped two girls in Thursday’s Station 19 (read the full recap here). First, the teens were moved to another floor, then Jackson excused himself; he didn’t want to be anywhere near the pig. When Bob arrived, he was as vile as advertised, insisting that the girls had broken into his home and set it on fire. Pull the other one, a–wipe. In the ER, Bob quickly ascertained that Owen believed the girls, not his patient. Nonetheless, he’d keep Bob alive if only to spend the rest of his life behind bars. “You’re the devil’s barbecue,” said Hunt, “so get used to the smell of burning flesh.” After Bob passed out, apparently having had a stroke, he was spotted by — dun dun DUNNN! — Opal, the sex trafficker from whom Erin had finally escaped. (Hey, I didn’t say the familiar face that returned was one that we’d be glad to see.) Opal had conned her way into the hospital by claiming to be the victim of a mugging and now was… well, doing what villains generally do: lurking. At the same time, Jackson assured young Jada that he was going to get her mom out of police custody (where she’d landed after an altercation at Bob’s), and Maggie empathized with Shanice’s mom, who marveled that after all this, she’d still have to get up in the morning and go to work as if nothing had happened, because hey, she still needed to pay the rent… after her child was abducted… during a pandemic. 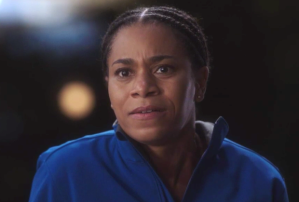 ‘GOOD LUCK WITH YOUR PLAGUE!’ | After the patient who’d been sharing his room died, a shaken Koracick snuck in Mer’s room for a visit. “I just wanted to see for myself that it’s possible to beat this thing,” he told her before admitting, “I really just wanted to be in a room where nobody’s dying… ’cause everyone’s dying.” As the impossibly sweet scene continued, they held hands. “I won’t tell if you don’t,” said Mer, the familiar twinkle back in her eye. Later, the two even laughed as he proclaimed that neurosurgeons were the best lovers of all surgeons. “OK, it’s been very nice having you stop by,” she joked. Outside the hospital, Amelia admitted to Maggie that while operating on Bob with Owen, she easily could have killed him, but she hadn’t because she’d taken an oath. Still, what he’d done was an outrage. In response, Maggie said that the real outrage was “the monsters that got us here… the many reasons that Black girls are more vulnerable in the first place and rarely seen as victims.” Hell, Maggie continued, “Now there’s a plague that is killing Black people at a rate that should make everyone outraged. If COVID were killing white people at the rate that it is killing Black people, you better believe that everyone would be wearing masks because it would be the damn law.” Way to bring the thunder, Maggie! 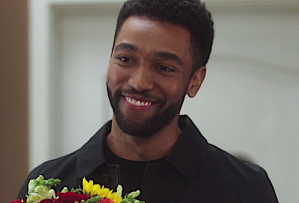 ‘YOU’RE SUPERHUMAN… YOU KNOW THAT, RIGHT?’ | When Bailey admitted that she couldn’t quite bring herself to settle a patient into the room in which her mother had died, DeLuca encouraged her to take a break. “Even superhumans need more than a minute to grieve the loss of the person who made them who they are,” he pointed out. A while later, after Grey Sloan had managed to transfer 27 patients in under five hours, she told DeLuca that she’d taken his advice and screamed into a pillow. Now she just needed to figure out what to do about a memorial service. She was crazy proud of DeLuca, though, when he said that he needed to leave to take his meds and get some rest. And who should he spot upon exiting? Opal. Carina just happened to be right there, too, so she volunteered to drive when he insisted on pursuing the sex trafficker himself. I have a bad feeling about the way this is going to end for Andrew. At Mer’s place, Maggie awakened to a whole mess of missed calls from Winston and… oh! Him at her door with a bouquet of flowers. “I told you the long-distance thing wasn’t working for me,” he said. (Romantic as the moment was, was immediately embracing a good idea? Erm… ) 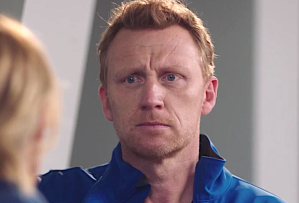 ‘WE NAMED OUR DAUGHTER AFTER A LIE’ | Back at Grey Sloan, Owen softened toward Teddy, leading her to confess that her old friend Allison hadn’t just been an old friend. “It is the only secret that I kept from you before Tom,” said Altman, “and I know that it’s connected.” She was going to try to figure it and herself out, and… Uh-oh. Owen was laughing hysterically. He had been wondering when she’d changed into someone who could cheat on him on their wedding day. “It turns out you didn’t change,” he said. “I just never really knew you.” Inside the hospital, Mer heard a code blue in the room across the hall from hers, so she climbed out of bed and began performing CPR on the patient. Then, just as Grey got the patient stabilized, the doctor collapsed in Taryn’s arms. (Not the way Helm had ever imagined it, that’s for sure.) Shortly, Richard consulted with Teddy and Amelia. Despite Mer’s rally, her “lungs are at a breaking point,” said Altman. So Webber made the call to put her on a vent — a procedure so nightmarish to observe, it should convince even the biggest skeptic out there to wear their damn mask already. So, what did you think of the midseason finale? Grade it in the poll below, then hit the comments with your reviews.