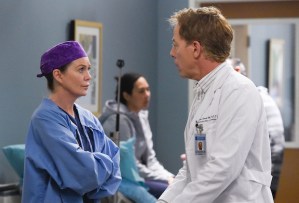 ‘SHE’S SUCH A LEGEND’ | As “Give a Little Bit” began, Mer phoned Jo, awakening her at 5 a.m. Grey had 25 patients lined up and only four surgeons on tap — dammit, she needed Karev. Fine, Jo grumbled. But “it’s not Karev anymore.” At a more reasonable hour, Richard and Maggie bumped into each other at the hospital and shared that they’d both heard from lawyers. Maggie’s uncle had settled his lawsuit, as Webber had predicted he would. And Catherine had filed separation papers. (In a totally Catherine move, she was “letting” Richard keep his house.) When Amelia arrived, she excitedly announced to Owen, Teddy and Jo that Link was her babydaddy. But Jo already knew from Link, and Owen and Teddy were super awkward about the whole thing. Relegated to the clinic, DeLuca treated a teenager named Cindy who’d come in with her Aunt Opal. Given Cindy’s reluctance to speak, Andrew asked a nurse to page Bailey: Cindy fit the profile for human trafficking! Or… was this just a case of DeLuca’s mania making his imagination overactive? It seemed — or was meant to seem — like the latter.

When Bailey checked out the girl, she drew a different conclusion than DeLuca had and, fearing he was on the verge of an episode, ordered him to go home and rest, then report to her office in the a.m. Instead, speaking as quickly as an auctioneer, he told Cindy and Opal that Grey was going to perform the teen’s surgery for free. Yeah, that was gonna go well. Mer and her team — Owen, Cormac, Jo, Hannah and Helm — were already up to their surgical masks in patients! What’s more, pro-bono day was quickly becoming disorganized, a situation made worse when DeLuca had Helm move around operations and operating rooms. “Tell DeLuca to stay off my schedule,” Mer instructed Taryn, “and my floor!” Eventually, though Cindy privately told DeLuca that she just wanted to go home, he spirited her away from her aunt to pre-op. Oh, DeLuca! In the pit, Koracick, sensing just how cranky and restless the patients were getting, told Mer to fix it, and he’d pay the overtime. As a matter of fact, Griffin had given the hospital a big enough donation to hold pro-bono day a couple of times a year. In about half a second, Mer deduced why the inventor had been so wildly generous. “Wow,” she told Tom, “I didn’t know you were that dirty.” (Right, ‘cause only Mer can break the rules for a good cause!) 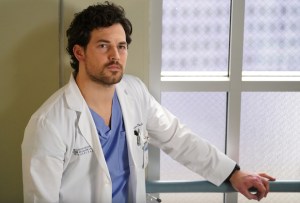 ‘DO YOU HATE THE NEEDY?’ | Elsewhere in the pit, Teddy treated Kyle, Station 19’s troubled vet, who was handcuffed to his bed and accompanied by a police escort. “If you work with me, I promise you I’ll help you,” she told him. After Kyle went kinda dead-eyed, Altman paged Tom… but got Amelia. “Do people really prefer him,” she asked, “because that concerns me on multiple levels.” Shortly, the arrival of Kyle’s girlfriend Ashley — his emergency contact — lit his short fuse, which in a way gave his doctors a better idea of what they were dealing with. In a heartbreaking subsequent scene, he explained that he had been pushing Ashley away because he tended to blow up that way daily; she didn’t deserve that. “Neither do you,” replied Amelia. When not treating Kyle, she learned that the Mariners had been courting Link to take back his old job at twice the pay, but since he was going to be a father and didn’t want to be away that much, he was turning them down. What’s more, Link had recommended Nico for the position, which he described to a concerned Levi as “a job I take unless I’m an idiot.” This only served to prove Helm’s point to Schmitt: that his boyfriend didn’t think of him, much less treat him, as an equal. But we’ll get back to Schmico in a bit. While awaiting Kyle’s MRI results, Teddy informed Tom that Amelia’s baby was Link’s. Aand… with that hanging in the air, she fled to look at Kyle’s scans. Oh, Teddy! (There was a lot of “Oh, [insert name here]!” this week.)

When suddenly a Code Violet was called, meaning someone was getting violent with hospital staff, the doctors all rushed to a waiting area, where they discovered that the cause for alarm was… an out-of-control DeLuca, who had a crying Cindy in the corner. He barked at security to arrest Opal and begged everyone to follow protocol. They knew what to do when someone was in danger, so come on, join hands (those were the days!) and form a human circle around her. Instead, everyone formed a circle around DeLuca. In disbelief, he wept that they had to save Cindy. (Giacomo Gianniotti was fantastically raw in this scene, wasn’t he?) Finally, Bailey got DeLuca to come down off the chair he’d leapt onto and leave with security. But after his subsequent powwow with the chief, he stormed past Meredith, announcing that he’d quit. When Grey tried to stop him, he grumbled, “I’m not your business anymore. I don’t work for you, and I don’t love you.” Harsh, dude. In response, she said, “But I love you. You went to jail for me.” He’d saved her, now she wanted to return the favor. So she beseeched him to accept Bailey’s suspension rather than walk. He agreed — on one condition: Mer had to convince Bailey to call the national trafficking hotline to investigate Cindy. 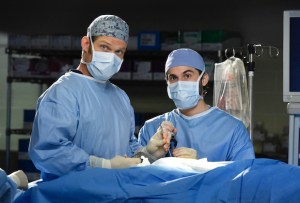 ‘I THINK I JUST DUMPED MYSELF’ | In surgery with Link, Levi found out that he’d turned down the Mariners so that he wouldn’t be away so much from Amelia and their baby. In other words, “you sacrificed the job for the person you love.” This being, like, a novel idea to Schmitt — that people consider their partners and their feelings now and then — he tried to discuss it with Nico, who was as interested in the idea of compromise as he was in developing love handles. “I’m tired of telling you I want more,” Levi said. Whelp, “I hope you’ll find someone who’ll give that to you,” replied Nico. Stick a scalpel in them, they’re done. Meanwhile, Amelia approached Mer about operating on Kyle during pro-bono day rather than let him be put off again by the VA. When other patients overheard that someone might be cutting in line, they were ready to mutiny. So Mer announced, “You’re all going to get your surgeries.” Thanks to a wealthy benefactor, pro-bono day was being extended… and there would now be one every month… which was more than I think Tom bargained for and did more for Grey’s legendary status than his pariah status. But at least Kyle was going to get his surgery and once again become the guy Ashley described, the one who used to dance to “Brown-Eyed Girl” in the aisles at the grocery.

As the hour drew to a close, the angry way that Opal led Cindy out of the hospital suggested that holy s—! DeLuca wasn’t just manic, he was right. Opal was a sex trafficker! (The trafficking hotline even asked Bailey — too late — not to scare the suspect away.) After Jackson’s long day of having his extra ticket to a big basketball game turned down by everyone from Owen to Tom — ha! Kidding. He couldn’t bring himself to ask Tom. But upon learning from Maggie that Richard had stepped down from surgery, he did ask his depressed soon-to-be-ex-stepfather and got not just a yes but a hell to the yes. Off his earlier non-conversation with Teddy, Tom told her that, having been cheated on himself, he never slept with married women, one of which she would soon be. Translation: “I love you, and I want to make this easy for you. Go home, plan your wedding, I’ll be just fine.” When Owen later found Teddy crying outside, she shared that “I… had a really rough patient” today. (Oh, Teddy!)

‘WE CAN BE SUPER SAD TOGETHER’ | In bed with Link, Amelia suggested that if the Mariners was his dream job, maybe he shouldn’t sacrifice it. They should always fight for their dreams. Um, it’s 81 away games per season, he explained. “OK,” she replied, “but the next dream.” At Joe’s, Jo invited a newly-homeless Levi to move in with her. “Jo,” he responded hilariously, “that time in my mom’s basement was a one-time thing. I’m a gay man.” Duh — that was why he was getting the invite. That, and she didn’t want to have to give up her home just because Alex was no longer in it; she wanted to change it instead. And in the last seconds of “Give a Little Bit,” we saw DeLuca racing along an empty highway on his motorcycle at a speed matched only by the rapidity of his speech during a manic episode. This did not seem to bode well for him. What do you think? Will DeLuca end up in the ICU? Are you surprised Teddy didn’t come clean? And how many times is Grey’s gonna let her break Tom’s heart? Hit the comments.