Death got a name in Thursday’s Station 19: Chad, of all things. While Pruitt was lining up firefighters’ boots on the steps of City Hall to represent all the first-responders who’d died of cancer in the past year with their medical expenses uncovered — take that, Dixon! — he groused to Ben that “we pretend that death is this quiet, lurking shadow [when really] it’s loud and obnoxious, and it comes at you, guns blazing.” It should be named, dammit. So Ben named it after a brat he’d once known. And, before “Poor Wandering One” was over, Chad had claimed a victim. Was it Sullivan, who was tasked with talking a troubled veteran out of detonating not only a grenade but a whole city street? Terminally-ill Pruitt? Or someone else? Read on and find out.. 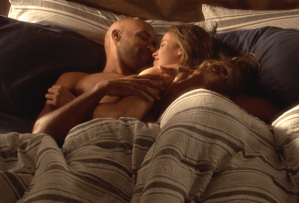 ‘I’M REQUESTING A DEMOTION’ | After the episode began with Andy and Sullivan basking in the afterglow of their reunion, Maya called them into a meeting at which she announced that the chief had, in essence, given her a medal that she hadn’t earned. She further called herself out for her own hubris in pursuing the promotion to captain for which Andy had already been in line, suggested that Sullivan had been protecting Herrera from her grief over Ryan, and asked for her old job back. Yeah, it was a lot to process. While Sullivan digested all that, Maya, Andy, Jack, Travis and Emmett reported to a military surplus store, where the proprietor was engaged in a standoff with a veteran named Kyle (UnREAL’s Josh Kelly). All the guy wanted to do was buy back the knife he’d sold there for $20, but now the owner wanted twice that! A real piece of work, the jerk cracked, “Inflation’s a bitch, kid!” and escalated the conflict to the point that Kyle pulled the pin out of a grenade and revealed that he’d rigged the whole block with explosives. As he put it, “You’re standing on a powder keg.”

Shortly, Sullivan arrived on the scene and related to Kyle Marine to Marine. He even got Kyle to let Andy and Jack escort out the proprietor… only Andy secretly hung back in case the chief needed backup. As Sullivan bonded with Kyle inside the store, the Dixons were making a mess of things outside. Emmett expressed his disbelief that they were running toward, not away from, the explosives, and his dad warned Maya that once his SWAT team arrived, the situation was going to be a police matter regardless of how well Sullivan was doing with Kyle. Soon, things went from tense to, well, tenser as Sullivan took hold of Kyle’s hand with the grenade in it — and they heard the SWAT team on the roof. Had Sullivan been BSing him that whole time? Kyle wondered. Fearful that the situation as well as her lover was about to explode, Andy revealed herself, and at last, Kyle was able to think of a reason to live: the girlfriend from whom he’d been hiding his condition. Robert understood, he said. He’d been afraid to tell Andy that he was in chronic pain and self-medicating. Your girlfriend might stand by you, Herrera told Kyle, in a way letting Sullivan know she hadn’t been scared off. They might get through it. So finally, Kyle surrendered.

‘IT’S HARD TO FIND A GOOD SECRETARY THESE DAYS’ | Back at the station, an old fella named Earl (Garrett Morris, still rocking his 2 Broke Girls character’s name) wandered in and demanded that Vic take him to the chief. Having had experience with dementia sufferers — her grandma had once become so disoriented, she’d wandered on stage while Vic was performing in The Pirates of Penzance — Hughes passed off Dean as the chief. It would be easier for them to communicate with Earl in his reality, she explained, than to drag him into theirs. Still, they didn’t really get anywhere with Earl until Dean started to play the piano, and Vic sang with the old guy (allowing Barrett Doss to show off her gorgeous voice a little). He sang along, then stumbled. When Vic reached out to help him, he slapped her — just as his daughter arrived. Turned out, she’d desperately needed a break and dropped Earl at the station to kinda babysit. Vic understood and asked only that the woman give them a heads up next time she was going to leave Earl at the station.

Meanwhile, Dixon threatened to bury Maya if she ever put Emmett in danger again, and Travis questioned why his one-night stand had become a firefighter in the first place. It had been his father’s idea, the probie replied. No surprise there, eh? Well, people were gonna die, Travis said, because Emmett was doing a job he wasn’t cut out for. In the gym, Jack suggested that Dean punch the bag less and instead… cry. Yeah, cry. To work out some of his feelings over JJ’s abandonment of their baby. Eventually, though Dean was still kinda peeved with Jack for sleeping with Rigo’s wife, he did end up laughing till he shed a tear. In the garage, Pruitt returned his uniform to Ben; his condition worsening, he couldn’t keep up with the PRT anymore and didn’t want to risk anyone’s life. “I’m gonna miss the superhero suit,” though, he admitted. In the kitchen, Andy nicely told Maya that she couldn’t step down — if she did, Dixon would never make another woman captain. And besides, “when I make captain, it’s not going to be because my friend gave me her job,” Herrera said, adding that they were still friends. “We’re not all the way through this, but we’ll get there.” Just then, in walked Sullivan with grim news: Rigo had died. As if Jack hadn’t already felt guilty enough! (Perhaps Rigo’s demise wasn’t a complete shock to those of you who read this.)

So, what did you think of “Poor Wandering One”? Hit the comments with your reviews, questions, observations, the lot of it.