Promos for Thursday’s Grey’s Anatomy promised that you would get “the paternity results you’ve been waiting for.” But the show has such a habit of faking us out that I — and perhaps you, too — went into the episode wondering if we’d really be told whether Owen or Link is the father of Amelia’s baby. Aand… did we find out which of the guys would end up passing out cigars? Did at least Amelia learn whose name should go in the “dad” section of the birth certificate? Read on…

‘GET A DORM, FACE-EATERS’ | As “Life on Mars?” began, Link and Jo groused at the sight of a couple in love (and making out) at the train station. At Grey Sloan, Amelia learned from Mer that Alex was gone and gone for good. But Grey didn’t really want to talk about it. Nearby, Owen and Teddy discussed wedding plans, the bride-to-be a little less enthusiastically than her groom. Cut to: the elevator doors opening, revealing, of course, Koracick, the ex that she so recently kissed in a panic. Oh s—, she’d gone so far as to sleep with Tom. His pillow still smelled like her hair, he told her. Still, it meant nothing, she insisted. She’d just freaked at the prospect of Amelia having Owen’s baby. Off their exchange, Teddy blurted out to Maggie that she had sex with her ex. Of all the people not to tell a secret to, Teddy! At the coffee cart, Vic apologized to Jackson for moving into his place without asking. She was also quick to say that she’d found a new place — she was moving in with new dad Dean. “That is certainly news,” said Jackson, clearly having noticed the hugeness of Dean’s biceps. Back inside, Richard balked at the arrival of his office furniture from Pac-North; he hadn’t ordered it and didn’t want it. In the pit, Mer and Levi treated a diabetic named Noelle, who’d fallen off a ladder while painting a house. Fumes, she guessed.

Shortly, Koracick took a meeting with wealthy inventor Griffin Ford (Jonathan Cake), who was responsible for the rocket that exploded last week on Station 19. He feared that he had a brain tumor, cancer, something, that had caused him to miscalculate so disastrously. In the ambulance bay, Link and Jo were surprised that in rolled a fella named Brad, who’d jumped onto the train tracks. He hadn’t jumped, said his girlfriend, he’d fallen when they were saying goodbye. Holy crap, exclaimed Jo (well, maybe not “Holy crap,” but close) — the two of them were the face-eaters that she and Link had grumbled over. In trauma, Amelia joined Link, Jo and Blake in trying to save Brad’s limbs. Amelia made a point of shutting the blinds so that Brad’s girlfriend didn’t see the grisly procedure. Thankfully, the fact that he had fallen on his guitar had probably saved his life, the docs told Brad’s girlfriend after he was out of the woods. Mainly, Link and Jo were stunned that the couple hadn’t heard the train coming. “Not even the ding-ding of the door?” 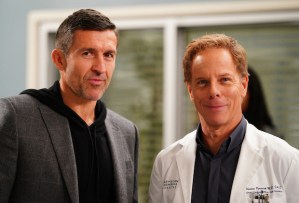 ‘IF ANY BILLIONAIRES TRY AND GET IN YOUR WAY, PUSH THEM ASIDE’ | As Noelle fretted about basically her declining Yelp rating, Mer and Levi realized that the patient wasn’t taking her insulin on the regular. With her parents now in assisted-living, Noelle had been forced to ration her medication to make ends meet. When Grey was paged by Koracick, she was understandably ticked to discover that Griffin had been given an entire floor of Grey Sloan — actual patients needed to be there, she argued, not an indulgent Richie Rich. While she examined him, he complimented her on her infamous “list” article, and she challenged him on the results of him asking Catherine for a favor. As soon as possible, Grey pawned him off on Jackson. “Your mom, your mess,” she said. Mer was just about to send Noelle to surgery when the patient started crashing. So she was still headed to the ER, just faster now, and more urgently.

Later, Vic was surprised to find that Jackson was upset that she’d moved in with Dean. WTH was she supposed to do — Jackson was ticked when she moved in with him, ticked when she moved out, and he was jealous over someone who’d only hit on Maggie once upon a time because he hadn’t known she had a boyfriend. Vic had friends — big whoop. She wasn’t putting up with Jackson’s bullcrap. Back on Griffin’s floor, the one-percenter wouldn’t accept a diagnosis of “Nothing’s wrong with you.” If nothing was wrong with him, he might go to prison for crashing that rocket. However, if Koracick could find something wrong with him, something to, say, get him off the hook, the doc could (hint, hint) do wonders (hint, hint) with the zillionaire’s fortune. Though Mer was in an understandably foul mood after Noelle needlessly passed away, Koracick asked Grey what she’d do if she had Griffin’s kind of money. (Coming next week: pro-bono day!) He also wanted to know how she decided when to break the rules. She listened to her gut, she said, and hoped what she did “improves this mess of a world just a little bit.” 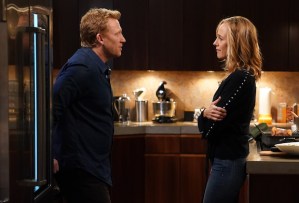 ‘AMELIA’S BABY MIGHT BE YOURS’ | Spotting Teddy hurrying away from him, Owen confronted her in the stairway, and she informed him that he might be Amelia’s babydaddy. If he is, “what does that mean for us?” she asked. When he hesitated to answer for even a nanosecond, she took it… let’s say poorly. “Wow,” she huffed before storming away. When Teddy dissed Amelia to Maggie, Maggie reminded her of how long she’d waited to tell Owen she was pregnant. Do not mess with Pierce’s sisters! After learning that Brad’s girlfriend wasn’t as devoted to him as originally thought, Link agreed with Jo that “all love sucks eventually.” It doesn’t, though, she argued. Because of how well Alex loved her, she felt worthy of love. “That is mine to keep.” Furthermore, she suggested — strongly — that Link not blow it with Amelia. She’d given him a choice… a choice that Jo hadn’t had with Alex. 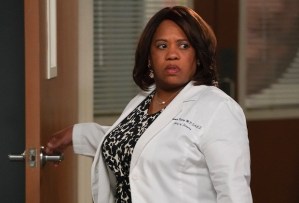 ‘TELLING ME YOU’RE DOING YOUR JOB ISN’T PART OF DOING YOUR JOB’ | In Bailey-mandated counseling, DeLuca… well, he mainly complained to his therapist. He resented being made to get a shrink’s OK to operate again, and he wasn’t having manic incidents, he insisted. What people perceived as mania was just passion for the job. That said, he had had a couple of stressful weeks. But that was it. Off Richard’s earlier upset, Bailey had his office set up the way it used to be. Of course he hadn’t wanted that Pac-North furniture. “You’re just like her,” meaning Catherine, yelled Richard. Bailey offered to put his office back the way that it had been, but he didn’t want that. He’d tear it apart himself — and he began doing exactly that. Later, Bailey was surprised to learn that Webber had handed off his entire service to DeLuca for the day. Later still, Richard apologized to Bailey, and he announced that he’d decided to step away from surgery indefinitely. He wanted to focus on his path pen and other innovations. If she really wanted to help him, she could support him in his next adventure, he said. “I want to look ahead.” She argued that Grey Sloan needed him. “And that’s how I want to step away, at the top of my game,” he replied. 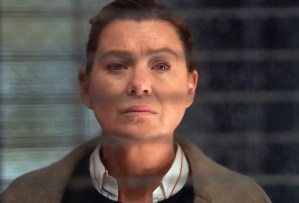 ‘I DON’T KNOW IF I KNOW HOW TO DO THIS WITHOUT HIM… OR IF I WANT TO’ | As the episode drew to a close, Koracick told Griffin that he had a minor aneurysm, one that might resolve on its own or might need surgery. “When will we know?” Griffin asked. “When we see the size of the check,” Tom replied. Meeting Vic after work, Jackson explained that he wasn’t a teenager and couldn’t just do things on a whim at this stage of his life. He wanted to be friends for a while, get to know each oth— “Bye, Jackson,” she said. (And she may well be my favorite character in the Grey’s-verse these days. Hughes for the win!) Alone with Bailey, Mer lamented that on a sucky day like this had been, Alex would’ve been the one to make her laugh. Bailey, in turn, shared that Richard was stepping away from surgery. In Koracick’s office, Teddy attempted to offer him a better apology than she’d initially given. But he didn’t want to hear what a great guy he was. And as if to prove that he wasn’t a great guy, he kissed her. Passionately. At Joe’s, DeLuca crudely hit on Jo. She responded by throwing a drink in his face and telling him, “Get help before it’s too late.” At Owen and Teddy’s, Hunt assured his fiancée that she hadn’t done anything wrong. Ha — if he only knew. “If you need to tell me anything, my answer is ‘I love you, and we’ll figure it out.’ That’s my answer always.” Finally, Link brought his guitar to Mer’s and stood outside in the rain until Amelia noticed and opened the door. “I wanted to write you a song,” he told her. He hadn’t, but at least what he had to say was music to her ears. “I don’t want to live without you,” he admitted. “You make me wanna write love songs in the rain. I don’t give a crap whose baby it is. I fell in love with you, Amelia, and I fell in love with this baby.” So he wanted to be with them no matter what? “I do,” he said. “I really needed to hear that,” she replied. Because she’d gotten the test results, and the baby is his! Hurrah!

So, what did you think of “Life on Mars?” Teddy’s infidelity? Amelia’s baby’s paternity? Hit the comments.