Wow. The midseason finale of Station 19 was so rough, a whole lotta viewers probably wanted to drop by Grey Sloan afterward for bruises on their hearts. Sure, a couple of couples got it on, and that was as sweet as it was sexy. But the hour’s main plot, which revolved around two Black girls kidnapped by an old white guy — and the police’s active disinterest in investigating — was the stuff of nightmares. Read on, and we’ll discuss…

‘OH GOD, THE WHISTLE’S BACK’ | As “Out of Control” began, our first-responders were mortified when Maya appeared to return to drill-sergeant mode… but she was just kidding, which, it bears mentioning, she is capable of doing. She actually wasn’t ordering them to run drills but to come over to her and Carina’s place for some day drinking. Alas, Ben would have to take a pass; he’d just learned that his mother-in-law had died and had to go home and break it to Tuck. As for Jack, he’d be late; he had to help Marcus with his online classes. Or, as his pals put it, he had to help his girlfriend’s son. Why, Jack protested, didn’t anyone believe that he and Inara were just friends? Andy did, she said. Or at least “I believe that you believe you’re just friends.”

When Ben got home and informed Tuck that his grandma had passed away, the teen took it poorly. Really poorly. As in so poorly that he didn’t want to hear that his mom was dealing with her grief in her own way, son. “I’m not your son!” Tuck yelled at Ben, who admitted to Roz, “That hurt.” So she recalled that when their mom had died, he’d told their Pops that the only person who’d ever loved him was gone. Ben hadn’t meant it, but it had sure stung their Pops. Nonetheless, he’d made his son spaghetti, because that’s what dads do — make room for their kids’ feelings. So that was exactly what Ben did. And though everyone was skeptical of his skills as a chef, he did draw out Tuck long enough to explain that what got him and Bailey through as they dealt daily with death was faith — their faith that maybe sometimes they could be the answer to someone’s prayers and restore their faith. 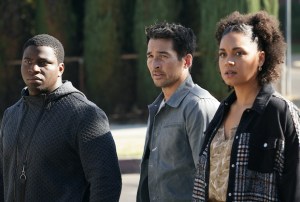 ‘THERE ARE NO RULES IN A 12-STEP PROGRAM’ | Hanging with Richard, Robert admitted that he was struggling with his separation from Andy. But why was he staying away from his wife? Webber wanted to know. Amelia had suggested it, Sullivan explained. Ah, but that suggestion was based on her experience; his might be different. As long as being with Andy didn’t make him want to drink or do drugs, Richard noted, “There’s nothing in those steps about separating from the people who love you.” Cue the lightbulb to go off over Sullivan’s head. While Andy ran out to get snacks for the drink-athon, Vic stopped by her parents’ restaurant to pick up pierogies… and ran into Theo. No sooner had she begun to regret using the word “congeal” in their conversation than he’d asked her out… and gotten shot down. While he picked up his order so that he could eat his pain, I had to wonder if I was quickly moving past shipping Vic and Dean. That Theo… he’s a charmer.

At Maya’s, Dean tried to pawn off as Travis and Vic’s housewarming present a teddy bear that had been sent by his parents for Pru. They were trying to mend fences, and he wasn’t having it; they’d cut him off, for Pete’s sake. “You’re a grown man with a job,” Vic pointed out. “Can you stop saying your parents cut you off?” Just then, they heard screams from next door. A woman named Joyce explained that the man who lived there had her daughter, Jada. The girl had had a sleepover the night before; when she and her friend Shanice were MIA in the morning, Mom had tracked her Fitbit to this address. Had she called the police? Well, duh. But three Black girls had gone missing in the neighborhood in the last year, and the police had done nothing. Cops, she said, “don’t care about Black girls.” And for sure, the ones who’d show up later in the episode weren’t going to. 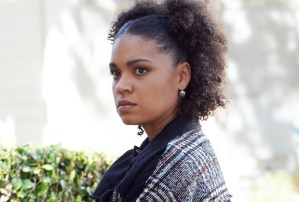 ‘IF YOU WANT TO BUILD A VILLAGE, YOU’VE GOTTA START INVITING OTHER PEOPLE TO LIVE IN IT’ | At the firehouse, Robert caught Andy swiping snacks for the party and brought their separation to a, ahem, climactic end. At the same time, as Marcus napped, Inara suggested to Jack that he didn’t have to sleep on the couch or in Marsha’s bed, he could… um… sleep in hers. With that, she kissed him, he kissed her back, and boom! They’d gone from friends to lovers. She didn’t usually have sex with her son in the next room, she hastened to note. But they’d been quiet, he said. “Also,” she quipped, “he’s deaf.” As Jack set off for his afternoon of day drinking, Inara requested that they not talk about what had just happened, not just yet; she liked the way that she felt and wanted to hold onto it for a little bit longer.

Back outside the kidnapper’s house, Dean expressed to Vic some of his fears for Pru. It takes a village, he noted, and he didn’t have one. Then he had to start letting people in, she argued — even imperfect ones like his parents and the sister who was trying to get them to patch things up. Finally, Dean could take it no more. He had to go pound on the door… only to be dismissed altogether by homeowner Bob. Later, after Maya had arrived on the scene along with Shanice’s mom, Sharon, Dean thought he… Was that a… Yes! Yes, it was a gas leak that he smelled. “We don’t operate that way, “ said Jack, being unintentionally ironic, considering he’d pulled the same trick to help Inara. Dean was distraught. Understandably. There were currently 70,000 Black girls missing in the United States. Forty-percent of sex-trafficking victims were Black girls. Fifty-percent of Black girls experienced some kind of sexual exploitation before they were 18. And yes, he did know the stats — he’d become obsessed with them since Pru was born. Vic knew them, too; she’d been well aware growing up that if she went missing, the cops wouldn’t waste a tank of gas looking for her. 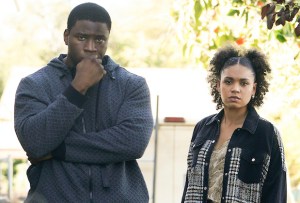 ‘SHE ABSOLUTELY DOES NOT NEED TO CALM DOWN’ | Just then, the police arrived. And they were not the heroes for whom we might have hoped. First of all, they hadn’t come because Joyce had called but because Bob had. Second, they completely disregarded the diverse firefighters on the scene with a dismissive “You people need to step aside.” Did they smell it now? Dean asked. Yeah, Jack smelled a gas leak. So did Maya. As Andy and Robert arrived, a fire broke out in the basement, prompting not only Dean but Sullivan to go in without gear. They could hear the girls screaming — they had to. As the cops empathized with, of all freaking people, Bob — “Kidnapping charges are a lot nicer than murder” — and shrugged off Vic with a rage-inducing, “Back it up, missy,” Dean and Robert located the girls in their prison and carried them through an inferno to safety. When Shanice came to, she explained to her mom that they’d set the fire when the yelling outside had stopped… as Officer Snyder took copious notes. “Just so we’re very clear,” Vic told him, “those girls are your victims.”

Meanwhile, Snyder’s partner, with all the sensitivity of a Mack truck, asked Jada questions about what had happened. Dude, they were f—ing kidnapped! “So they say,” cracked Snyder. “Kids lie all the time.” Joyce couldn’t take it anymore and lunged, prompting Dean to intervene in her arrest. Before you could say, “Aw, man, this is so not right,” he was being tackled by three cops, his colleagues powerless to intervene. Anytime they tried, it only made matters worse. Andy, for instance, was knocked to the ground by a policeman. “Nineteen, stand down!” Maya ordered. But it was bedlam. Robert ran to defend his wife, Snyder and other officers drew their guns, and in the end, for saving two Black girls from their abductor, Sullivan and Miller wound up being arrested for obstruction of justice, breaking and entering and being decent human beings. That last part wasn’t on the official charges that were rattled off, but let’s be real. So, what did you think of the midseason finale? Process your feelings in the comments after grading the episode in the poll below.