A character from the original Power shows up in this week’s Book II: Ghost, and while it’s not (yet) the lovable blonde psychopath Tasha named in court at the start of the series… it’s certainly someone who could mess ish up for her in a heartbeat.

Read on for the highlights of “Good Vs. Evil.” 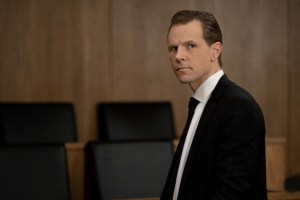 2-BIT FTW | Saxe and MacLean strategize at the start of the episode, reminding us that they’re working together for their mutual benefit. “I’ll have the ‘W’ in my pocket, and you’ll have your killer. Everybody wins,” he tells the Assistant United States Attorney. “Except Tariq,” who would then get arrested for Ghost’s murder, Saxe points out.

So jury selection goes surprisingly smoothly — given that the two men are working together to find a pool of people who’ll find in Tasha’s favor — but MacLean secretly meets with 2-Bit after the felon hires him as his attorney (so they can speak in private). “I want to get Saxe. You want to go home. We can both get what we want,” he tells him, bringing in suspended NYPD cop Blanca Rodriguez to counsel him on what to say that “won’t exactly be perjury” when he gets on the stand.

When the time comes for 2-Bit to testify, he flouts his “transactional immunity,” which means he just has to show up and answer questions to the best of his ability in order for him to get sprung from the pokey. He claims not to know who Tommy Egan is, he asserts that Tasha wasn’t in charge of any large drug ring, and he mentions that he might’ve helped Tariq once when he got “lost” (read: around the time Tariq killed Ray Ray). The testimony makes Tasha look good, but she’s still worried about her son’s connection to one of Tommy’s men. The last time we check in with 2-Bit during the hour, he’s strolling out of jail in his civilian clothes. 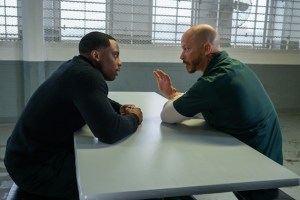 RAISING CANE | Cane thinks Diana and Tariq are sleeping together, so he goes to Stansfield to have a nice, calm, totally not threatening conversation with young Mr. St. Patrick. But he finds Brayden and Trace in the room instead, arguing about how Trace took some of Brayden’s product. Cane pulls a gun and things get real real fast; when he learns that Brayden doesn’t have his weight or the money for it, he orders both men to ditch their cell phones and come with him. At least Brayden has the presence of mind to bump into the chessboard on the way out, activating the emergency signal he and Tariq established a while back.

For reasons I — and later, Monet — cannot understand, Cane thinks it’s best to scare the Weston brothers by giving them backpacks full of Tejada product and making them sell it on the street in Queens. What’s to stop a uniformed police officer from arresting Trace, for example, who’d happily sing out the name of the man who kidnapped him, and thus expose Monet’s entire organization? Anyway, Brayden uses his people skills to make friends and sell the entire bag. But Trace is his usual douchey self, and he gets beat up a little before Cane and Brayden swing by to rescue him.

Speaking of rescue, Officer Ramirez later pulls Cane over and tells the Weston bros that he’ll take them back to school. Then he warns Cane not to do stupid stuff, but Cane doesn’t listen. Back at the house, Ramirez tells Monet what went down and cautions her to get Cane back in line. She makes it clear that all of them — including him — belong to Lorenzo. So he snaps back that she shouldn’t call him the next time Cane does something incredibly dumb.

When Monet eventually confronts Cane about his choices, it gets heated. Cane gets a little too close to his mom, which makes Diana go to pull him away. As he pushes her off and rears back, he winds up putting his hands on Monet and knocking her to the ground. Cane goes to visit Lorenzo, who reminds her that his mom is “the boss, little man.” Then he hugs him, kisses him, calls him his soldier… and has a handful of prison guards accost him before he leaves the building. “Don’t you ever put your hands on my wife again,” Lorenzo warns his bleeding son.

* Saxe warns Riley not to get anywhere near Brayden or Tariq again. So, of course, she spends most of the episode playing chess with — and annoying — Tariq in his dorm room.

* Dru directly defies Monet by meeting up with Everett at Stansfield again, despite the closeted basketball player’s behavior at the frat party a while back. Everett says he just wants to go pro and can’t figure out how he can do that as an out gay man. Dru doesn’t love that reasoning, but they sleep together anyway. And when a CourseCorrect packet shows up at Ev’s room, Dru realizes how Tariq is moving Tejada weight on campus. When Diana comes looking for her brother, he shares with her. And when she stops by Tariq’s room, she thinks he’s hiding Lauren in there and gets testy. Back at home, Diana tells Monet about CourseCorrect — against Dru’s wishes — but the drug boss isn’t mad at St. Patrick’s ingenuity. And, to make matters worse, she gets very suspicious about why Diana would want her to shut Tariq down. Long story short: As is often the case, Diana is the only Tejada kid who does what she’s supposed to, and she STILL gets a verbal beat-down from her mom.