I believe in a few universal constants. Gravity keeps us pinned to Earth. Mulder and Scully fell in love in Season 2. And Kylie Bunbury, whether she’s sporting a baseball uniform or a jellyfish dress, kicks a whole lot of tush.

Therefore it’s not hugely surprising when Bunbury’s Big Sky character, private investigator Cassie Dewell, starts to narrow in on the bad guys in only the second episode of ABC’s new thriller. Most of me thinks, “Look at Cassie doing her thing. This tracks.” But some of me thinks, “A) This is very dangerous, so please get away from the violent misogynist, Cassie, and B) This show is burning through plot rather quickly, right?”

Even with Legarski already Number 1 on Cassie’s suspect list, I’m sure we’re just at the tip of the terrible human-trafficking iceberg, which is a disturbing thought — almost as disturbing as Ronald’s relationship with his mother, which reaches a squicky new low this week.

Read on for the highlights of “Nowhere to Run.”

NO NEWS IS NEWS | The morning after the girls’ disappearance, Cassie and Jenny still haven’t heard from Cody. The last time he checked in, he told Cassie that he and Officer Rick were going to the cult-y church to check things out. But now Legarski is saying that Cody went alone, which raises Cassie’s hackles. Jenny’s worried about something else entirely: Cody is an alcoholic, they know he was at a bar at some point, and maybe he’s drowning his sorrows over his breakup with Cassie? Cassie admits that Cody wasn’t happy when she told him they couldn’t see each other anymore, but when Jenny presses, “Was he in love with you?,” Cassie replies that she doesn’t know. Jenny definitely wasn’t expecting that answer, given the way her eyes fill with tears at hearing the words said out loud. 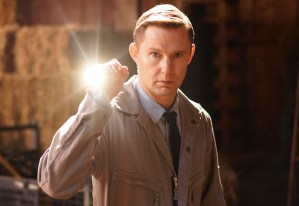 Meanwhile, Ronald buries Cody’s truck and Danielle and Grace’s car in a giant pit, then undergoes a scolding from Rick about the bad judgment he used in grabbing the teens. “The idea is, we take girls who won’t be missed,” the older man lectures, saying that “dirty girls” are their stock in trade. He adds that he killed Cody because the private eye had already mentioned the possibility of the kidnapper being a long-haul trucker, and he couldn’t let the former lawman get that close to the truth.

A CREEPY VIBE | Cassie drives to meet Rick at The All In (aka that closed-down diner where Cody met him in the premiere), and he is super off-putting from the get-go. He can’t stop talking about how Cassie is beautiful and Black, two rarities in that neck of the woods. She is appropriately weirded out, and you can tell she doesn’t buy his story that he didn’t accompany Cody to the Church of Glory and Transcendence because Cody was a “renegade” who was likely to put Legarski’s job/pension at stake. He also balks when she wonders why he didn’t follow up with Cody later, but eventually he agrees to call a judge and try to get a warrant to search the church.

Just when Cassie thinks she’s free of the creeper, he follows her out to her car and gets in. They talk about how he’s never used his gun (although we know that’s not true) and she makes it clear that she trained at the FBI Academy. He points out that she didn’t graduate, though, and then he comments on her looks roughly 200 more times. Cassie outright asks if he’s trying to intimidate her, and he does that aw-shucks-I’m-just-a-simple-Mayberry-rube thing until she leaves.

Meanwhile, the waitress at the diner from the first episode tells Jenny that Jerrie (whom Ronald met as “Michelle”) is missing after working at a truck stop outside Helena the night before, and she’s worried. 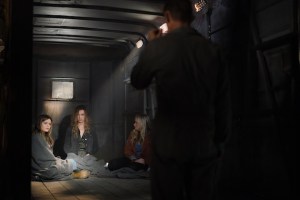 THE WORST LAID PLANS | On Rick’s orders, Ronald tells Jerrie that she’s going to get cleaned up and go to “a better place.” This, of course, is not comforting in the slightest. He makes her strip and shower in front of him, and though he averts his eyes, Jerrie asks him to turn around and see what’s going on. As Ronald looks, she takes off her wig and shows him the full monty; next we see, he’s tossing her back into the cell with Dani and Grace. Earlier in the hour, Dani and Grace had learned that Jerrie is transgender. When she’s brought back, the girls quickly work to comfort her and ascertain that she’s OK.

Knowing that they need some sort of strategy not to go crazy, and working off Jerrie’s sense that their captor is quite lonely, Grace suggests that they make Ronald think that they like him. That way, he’ll drop his guard and they can try to overpower him. Danielle loudly lets everyone know she thinks it’s a terrible idea, especially because Grace says her bombshell of a sister would have to be the one to lead it.

Grace also comes up with a plan to stop them from losing hope: “I figured we start a girl band.” She’s serious. Jerrie is a singer, which we know from the premiere, and the sisters have experience in their church choir. So at various points in the episode, the trio breaks out in three-part harmony to keep the paralyzing fear at bay. (Though when Jerrie reports that Ronald’s goal is to sell them into sexual slavery, that terror comes back with a vengeance.)

EX MARKS THE SPOT | Rick seems more amused than angry about the fact that the “lot lizard” Ronald picked up isn’t biologically female. He deems Jerrie nothing more than a “curveball” they’ll have to deal with in their plan to sell the girls to Canada. There’s a lot more nonsense he spouts in the episode about how he and Ronald are “noble soldiers” and how “This nation is mired in muck. We clean that muck up.” But what you need to know at the end is that Rick’s ex-wife calls him: Cassie’s been asking questions, and “she’s not a fan.” (Side note: What do we think “Please tell me you haven’t been hanging around the strip malls again” might mean?)

Back at Cody and Cassie’s office, Jenny says she thinks Jerrie’s disappearance is linked to Danielle and Grace’s. And Cassie says she’s got a feeling very similar to the one she felt when her husband, a military officer, was killed in action.

Elsewhere, Ronald’s mother is sleeping in her bed when Ronald walks into her room. “I couldn’t sleep,” he complains. So she moves over, he crawls under the covers, and they cuddle.