Animal Kingdom is turning back the clock in Season 5, introducing fans to a fresh-faced version of Deran’s estranged father. 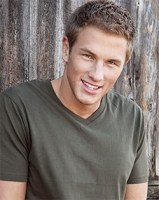 Animal Kingdom resumed production on Season 5 in early September, having had filmed about half of the season before pressing pause due to the COVID-19 pandemic.

The show’s fourth season, which finished airing in August 2019, witnessed the departure of longtime star Ellen Barkin as Smurf. It was a shocking twist (click here to read all about it!), but as TVLine’s Charlie Mason noted at the time, “the daring move suggests that the TNT drama will only become more compelling in Season 5.”

Your hopes for Animal Kingdom‘s upcoming fifth season? Drop ’em in a comment below.