Warning: The following contains spoilers for Tuesday’s harrowing penultimate Season 4 episode of Animal Kingdom. Proceed at your own peril.

We kinda knew that Animal Kingdom’s baddest of badasses wasn’t going to wither away in a hospital bed as she feared. But I don’t think any of us could have guessed that Smurf’s last stand would go down the horrifying way that it did in “Ghosts.” Read on, and we’ll go over all the gory details of the tremendous John Wells-written and -directed episode.

‘A DEAL’S A DEAL’ | In the 1970s, Janine, still reeling from Colin’s demise, thought she’d struck a deal with Jed to buy a car for $500 so that she could hit the road. Only, after he’d tuned up the vehicle, the sleazebag decided that he wanted “some fun” with her instead of the money. When she pointed out the obvious — that she was eight freakin’ months pregnant — he replied, “You still got a mouth.” Charming, no? In the end, Janine wound up grabbing him by the balls, whacking him with a shovel and taking off on foot — only to have him tackle her, sending her into premature labor with Julia and Pope, who we learned had been born with teeth. (This, according to Laney, meant that he’d be a warrior.) 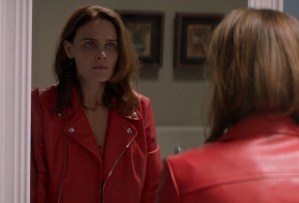 In the present, as Smurf made her way home after a night of partying, Angela continued to try to set herself up as a replacement mother figure by baking a coffee cake. Yeah, yeah, but how are your pies, Ang? Across town, Deran informed Adrian that their destination was Indonesia. “Great surfing, no extradition treaty.” Once Smurf made it back to Casa Cody, she got dressed for the heist, which mainly involved putting on enough gold jewelry to rival Mr. T’s collection, and flushed all of her pills. Wait, no — most of her pills. She decided to leave out a bunch of oxy to tempt Angela (who nearly drowned in the tub after taking the bait). Smurf also threw out her would-be replacement’s coffee cake and, being the fastidious housekeeper that she is, washed the pan. 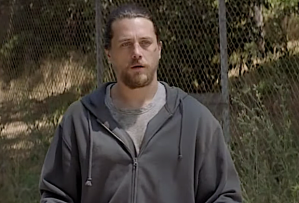 ‘SEE YOU ON THE OTHER SIDE’ | Riding with J to Jed’s compound, Smurf first made small talk about whether Craig would be a good dad. Maybe if he got a book on the subject. After all, “they’ve got a book for everything nowadays.” Then she revealed what had to have been the real reason that she wanted to travel with J: to fill him in on the threat that Adrian posed. “J, I don’t think Deran is strong enough to handle this,” she purred. “Do you, baby?” Once the group arrived at the compound, J, Deran and Craig went to work breaking into the bunker while Smurf and Pope went to the house to keep Jed and his sons occupied. Of course, Smurf also made time to visit Colin’s grave and, for what we thought had to be the last time (but wasn’t yet), mess with Pope’s head. First, she told him they were standing at his father’s grave, then she introduced Jed and Odin as his uncle and cousin. 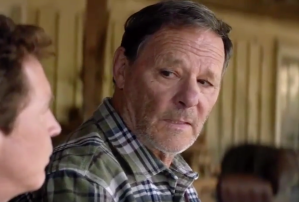 Once J texted his grandmother that the job was done, she got down to her own personal business: She asked to buy some guns so that Jed would discover that his bunker had been chained from the inside. She then murdered him and got into a shootout with not only Odin but his brothers, who’d picked that unfortunate moment to return from fence-mending. As shot after shot was fired, Smurf was hit in the leg. But that didn’t piss her off nearly as much as Pope carrying her to safety. “You son of a bitch!” she screamed at him. He’d thwarted her plan to die in the same spot as Colin. When the two of them met up outside the compound with J, Craig and Deran, Smurf took Deran’s gun from him and ordered Craig to give his to Pope. “Shoot me, Andrew,” she demanded, seizing one last opportunity to warp his mind. “Don’t you get it? I’m already dead.” When he hesitated, she actually fired at him, grazing his ear. “Shoot me, you goddamn p—y!” she raged. Finally, J did what Pope couldn’t, and the wicked witch was dead. 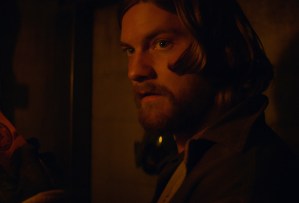 ‘WE’RE GETTING THE HELL OUTTA HERE’ | As the episode drew to a close and we began to catch our breath, the boys laid out Smurf’s body in the garage at Casa Cody. Making a fine case for why he should become the gang’s leader, J concerned himself with the truck that Pope had left behind at the compound and instructed Deran to call in his doctor so that Smurf’s death certificate wouldn’t alert the cops to the fact that she had been shot in the head. Later, Renn comforted Craig, Deran told Adrian they were never coming back to Oceanside, Angela kissed up to J anew, and Pope… our poor, broken Pope sweetly kissed his mother’s cold forehead. We’re entering uncharted territory, folks. It’s the end of an era, and what the next one will look like, I can only imagine. What did you think of Smurf’s last stand — and that performance by Ellen Barkin? The word “Da-amn!” comes to mind, no? Also, check out writer/director John Wells’ take on the episode here.