Warning: The following contains spoilers for Animal Kingdom‘s altogether shocking Season 4 finale. If you’d rather watch first, read later, you know what to do, baby.

Leave it to Janine “Smurf” Cody to find a way to hiss “Screw you!” to her boys from beyond the grave. In Animal Kingdom’s surprise-filled Season 4 finale, the contents of her will set the stage for massive conflict in Season 5. The episode also included a heartbreaking resolution to Deran and Adrian’s story, a comeback that we (at least I) never saw coming, another big confession from Angela and an ending that almost seems designed to say, “Chillax, people. The show’s gonna be fine without Ellen Barkin.” Read on, and we’ll go over it all blow by blow. 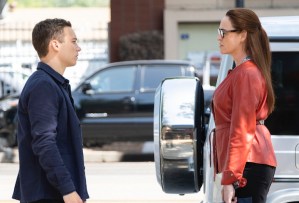 ‘LOSE THE GLASSES, YOU’RE NOT JOHN GOTTI’ | As “Smurf” began, after J informed Gia that Smurf was dead, the fence informed him that she wasn’t interested in moving the Codys’ gold — not until the smoke cleared and she learned who was going to be taking over for the late queenpin. When J subsequently joined his uncles at Casa Cody, he suggested that they hold a memorial for Smurf and find a way to let people know that they were still in business. (Note: He did not mean putting up fliers.) Following that brief powwow, Craig gave Deran his and Adrian’s fake passports and took a last, futile stab at convincing his brother to stick around. Inside, Pope gave J 24 hours to clear out. He had a total of zero f—s to give about his twin sister’s son. “You wanna be one of us so bad,” Pope growled. “You think you can run the family? You think you can be Smurf? You’re a leach, J. None of us trust you.” Harsh, Pope.

Meanwhile, Angela, fresh from being fired, was approached by her brother Mike’s babymama. Turned out, Angela’s Get Out of Jail Early card had been bought when she’d flipped on her sibling, with whom she’d committed a series of robberies. Now Mike was out and looking for payback. Since the woman didn’t want him going back to prison for murder, she urged Angela to steer clear. Yeah? Well, Mike had better steer clear, Angela retorted, because she was with Andrew Cody now. At that, the woman just laughed; wthout Smurf, the Codys were as scary as a boy band. When Angela returned to Casa Cody, she passed herself off as Julia to sign for FedExes for her late friend as well as Deran and Craig. In the envelopes? Smurf’s will, which she immediately read, then took to J at the bowling alley so that she could reveal that his grandmother had screwed over him and his uncles, and left everything to a Pamela Johnson. Pamela Johnson? Who the hell was that?!? 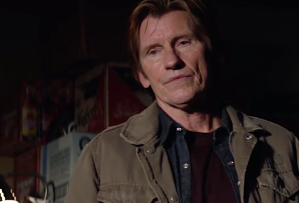 ‘I’M ALL YA GOT NOW AND VICE VERSA’ | We actually knew the answer to that question, we (or again, at least I) just didn’t immediately realize it. But the episode’s 1970s flashbacks filled in the blanks nicely. After Laney risked retaliation from Jed to help save Janine from becoming his prisoner, she made a beeline for… Pam! You remember Pam, the waitress with whom Jake hooked up… the one who had a kid and ripped off Manny & Co. Anyway, the new mom was ready to take her up on her offer to work together. And though Pam turned her down — at least till Janine had recovered from having twins — she did give her some money. Janine didn’t even have to pay her back, she said. “It’s a gift.” Afterwards, Janine took Pam’s advice and sought out Jake. “Whatever you did,” she said, “Jake’ll take you back.”

Back in present-day, Pope was taken aback when a lasagna-wielding stranger named Marjorie Grant showed up at Casa Cody. Smurf had long helped with her rent, the woman said, in exchange for… you know, this and that. (God knows how many other people Pope would wind up having to keep paying off!) At the bar, Deran was stunned to find Billy in his office with the money that he owed him. Well, some of it, at least. Billy promised his son that he was working on getting and staying clean so that he could stick around Oceanside. Too bad his timing sucked, Deran said before throwing him out. Deran wouldn’t be in Oceanside much longer himself. Later, Billy hung around the bar shooting the breeze with Jake, who’d shown up for Smurf’s memorial and was contemplating telling Craig that he was his father. Jake only hadn’t done so years earlier because Smurf had told him if he went anywhere near his son, she’d kill him. “I believed her,” he added. 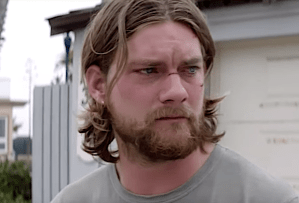 ‘WHO THE HELL ARE ALL THESE PEOPLE?’ | That afternoon, Smurf’s memorial service at the house filled up with strangers, cops and guys with fond memories of banging the deceased. When Billy rolled in with Jake, Pope rolled Deran’s dad right back out. But before Billy left, he apologized for some of the s— he’d done to Andrew when he was a kid. “Some?” Pope shot back. When Billy let slip that Deran was getting ready to leave, Pope forgot all about kicking him to the curb and took off to confront his brother. Deran at last told Pope everything that had been going on with Adrian — including that he’d turned down immunity so as not to rat out the Codys. Deran was taking his boyfriend away that night, then he’d be back in a couple of weeks. No, you won’t, Pope knew. “You’ve been trying to get away from us since you were a kid. I get it. If I could start over, I’d do it, too. But I am who I am.” With that, Pope hugged his brother goodbye and tearfully admitted, “I’ll miss you.”

Back at Casa Cody, Jake introduced himself to Craig — though not as his father — and they shared a laugh about Smurf having shot him in the kneecap for stealing. That was just like her, Jake said. “Shoot first, never ask questions, never apologize.” Elsewhere, J met with Frankie, who presented him with all kinds of intel on Pamela Johnson, her son Phoenix and daughter Robin. Pamela, now 65, lived in New Mexico and had done time in ’83 for a string of robberies that she committed with a partner who was a white chick. (Gee, wonder who that could’ve been.) Phoenix had done some time, too, but Robin was clean. “So,” Frankie asked, “did I pass?” She had. Apparently, she and J were now in cahoots — and a fascinating scheme team they make, too.

‘MIKE’S MY BROTHER, BUT HE’S NOT MY FAMILY’ | As day turned to night, Pope took to hiding in Smurf’s room from the guests at her memorial. When Angela found him, she encouraged him to do as J asked and meet him “at some bowling alley.” She also filled him in not only on Mike’s threats but the reason he was homicidally pissed. Later, at the bowling alley, J revealed to Pope that the place was his. He’d bought it, along with a house and a laundromat, with money he stole from Smurf when he had power of attorney. J then presented his uncle with Smurf’s will and suggested that they could either just hand over everything they’d worked for to this Pamela Johnson… or they could get a lawyer to write up a new will, backdate it and play dumb when she showed up. “I can help you run this business,” J added, “because Smurf taught me how.”

At the pier, Deran waited until his and Adrian’s ride showed up to tell his boyfriend that he couldn’t leave his family. Then Adrian would stay, he said. No, that wouldn’t work. Deran knew that the cops would make his life behind bars extra hellish to get him to flip. He’d wind up dead, and Deran would never know if his brothers had been responsible. “If you love me, come,” Adrian pleaded. When Deran refused, Adrian reiterated that he loved him and always had… but “you’re the worst thing that ever happened to me.” After Adrian walked away, Deran just broke the hell down. The following day, the Codys had no idea what to do with their box of Smurf’s ashes. But at least Pope knew what to do in that moment: They had to show Oceanside that they were still there. So they sent Angela to see her brother, who wasn’t intimidated at all by her gun or by her assertion that she was with the Codys. “Smurf’s dead,” Mike scoffed. “Codys don’t mean s— anymore.” So right on cue, the Codys came around the corner and opened a can of whupass on him and his cronies.

I know we’re all in mourning over Smurf, but you have to admit, that was a freakin’ great finale, no? Grade it below, then hit the comments. Who would you cast as the older Pamela?