The sequence of events the end of A Million Little Things‘ Season 2 finale seemed as certain as they were grim: After a man seated next to Eddie at a bar had clearly had too much to drink, viewers were led to infer that the inebriated bar patron got in his pickup truck and accidentally mowed (a sober) Eddie down as he crossed the street.

But Thursday’s Season 3 premiere introduced an intriguing new concept into the mix: What if the person who hit Eddie and then sped off wasn’t the drunk barfly? And even more sinister: What if Eddie’s assailant ran him down on purpose?!

The moments immediately following the incident showed the driver swerving all over the road and making a panicked 9-1-1 call as he fled the scene. But we never saw his face, and he hung up on the emergency-services operator without giving his name. 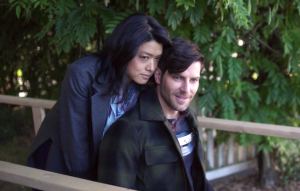 Much later in the episode — and a month later in the timeline of events — a man in a pickup truck spied on Katherine and the now-paralyzed Eddie as they renewed their wedding vows in their backyard. But when the camera showed the man’s face, he was not the man whose intoxicated ramblings had made Eddie realize he didn’t want to give up his sobriety.

Instead, the man in the truck at the end of the episode was the father of Alex, the woman in whose death Eddie thinks he might have been involved many years before. (Read a full recap of the premiere, and then hear what David Giuntoli has to say about his character’s fate.)

But did Alex’s dad try to kill Eddie? And was the old drunk just a plastered red herring? When TVLine tried to pin series creator DJ Nash down on the specifics, true to form, he seemed to revel in our uncertainty.

TVLINE | We’d been thinking that the man who had been drinking next to Eddie was the one who hit him, but that was Alex’s dad, correct?
That is what we have to find out. This part of the season is: Now that we know Eddie has survived and answered that important history, who hit him and why?

TVLINE | OK, now I’m going to Law & Order you and go through the details.
And I will say that you’re left right now feeling like it was, like this is who it could be. It could be the drunk guy at the bar. It could be Alex’s dad. It could be someone else. It wasn’t me. [Laughs] Just letting you know it wasn’t me.

TVLINE | The man we saw at end of the episode, the man in that truck, is Alex’s dad, correct?
Yes. Absolutely, yes.

TVLINE | And he had what looked like a Bible on the seat next to him? (Editor’s note: We zoomed in on the image to try to see what verse he was reading, in order to maybe get a sense of his mindset, but alas, we couldn’t make it out.)
He is a reverend, yes. Maybe, maybe he’s a reverend who needs to confess.

So now we want to know: Who do you think ran Eddie down? Make your choice via the poll below, then go to the Comments to make your case!