On the plus side: A Million Little Things‘ Eddie is, in fact, alive.

On the not-so-great side: As the Season 3 premiere revealed Thursday, Eddie is paralyzed as the result of his hit-and-run, and now must rely on a wheelchair to get around. (Read a full recap.)

The ABC drama’s latest “card flip” — aka how showrunner DJ Nash likes to refer to the unexpected twists that have marked the show since its start — sets David Giuntoli‘s character up for a rough readjustment (not to mention whatever physical recovery may or may not occur).

He added that Eddie “hasn’t ever really been punished for his missteps. He’s felt remorse, and he’s felt guilt, but he hasn’t really been punished. I’m not saying that this was a punishment as a result of [his misdeeds], but for the first time in the series, we are seeing Eddie have to pay a price and have to overcome something.”

TVLine also chatted with Giuntoli about Eddie’s fate. Read on to hear his thoughts on “karmic justice” and the family’s rough road ahead. 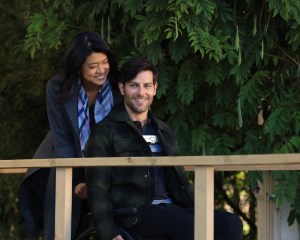 TVLINE | The show really messed with people who wanted Eddie to be alive.
Which was surprisingly more than more people than I thought. [Laughs] OK? I really did not think this guy was that likeable, but I think he put in the work. I think he and Katherine put in the work where people now want to see it work.

TVLINE | When I spoke to DJ Nash, he said that Eddie’s been really sorry for all the things he’s done, but this is the first actual consequence in his life, that something actually bad has happened, which I thought was interesting.
That is actually true. He had some awkward dinners for a month, and that was kind of it. [Laughs] I think there’s an inherent, maybe latent, sense that justice, karmic justice, wasn’t served to Eddie. I think that the viewer will no longer feel that way. He really, really does go through a lot.

TVLINE | So we have the happy ending of his not being dead, but this is a huge change for that family and his relationship with Katherine, especially. How will their marriage reflect these new roles they’re being pressed into?
First of all, it’s an incredible story line to get to play. I feel a responsibility to do service to people who have gone through something like this or are going through something like this. I’ve started some relationships with guys in general who became paralyzed in their young lives, and the things that they’ve told me that happened to them psychologically, a lot of them, are being addressed on the show.

This is me getting back to your question. [Laughs] First of all, there is no end to the pain, the physical pain. It never ends. Eddie constantly has to rearrange himself, deal with this spinal column pain and the pain that comes from sitting all day long. You’re in excruciating pain a lot of the time, for a lot of these people. Eddie, and a lot of the guys I’ve spoken to, feel like their gender went from “male” to just “wheelchair.”

You do not feel like you are the “man” you were, and that’s something you have to struggle with and come to terms with. I think Eddie will feel a lot that Katherine did not sign up for this. He will feel like she should just fly away. When we got together, I was a rock star, or at least a moderate rock star. Local, anyway. [Laughs] And now this is what she’s saddled with, and he feels a tremendous guilt.

TVLINE | That’s a lot.
It is. And Eddie, certainly in Episode 2, you start to see Eddie not wanting to put anything more on this family than he already has in the previous two seasons of iffy decisions. So, Eddie is putting on a very strong face, and he doesn’t show his family how much pain he’s in and how much help he needs.

TVLINE | There was the line where he refuses, or tries to refuse the oxycodone they prescribe him at the hospital. Given his history, does that become another struggle for him as the season goes on?
Oh. Yeah. I mean, yes. Katherine brings the pills home for a reason. There are safe ways for someone who is an addict to take narcotic-level pain killers. It’s just such a slippery slope for him, and I think Eddie want to prove to Katherine that he has just got it under control, and the fact that he’s not taking this high level of painkiller adds a lot of mental and physical stress to Eddie’s life.