After a long and agonizing wait, A Million Little Things fans on Thursday got the answer to the question that’s been lying there, bleeding on the pavement since March:

Did that hit-and-run in the Season 2 finale kill Eddie?

Thankfully, the answer is no. In the Season 3 opener, after some strangers administer CPR and call an ambulance, Theo’s dad spends a bunch of touch-and-go hours in the hospital’s intensive care unit before he wakes up and recognizes both Katherine and their son. But it’s not all good news: When Theo climbs up on his dad’s hospital bed, it becomes clear that Eddie has no feeling in his legs.

Fast-forward a month, and Eddie is discharged. He’s in good spirits but he realizes the road ahead will be hard: He’s unable to walk and must use a wheelchair to get around.”I can’t help but feel like once again I’ve let you down, and I would totally understand if you said you just can’t do this anymore,” he tells Katherine on their way home. 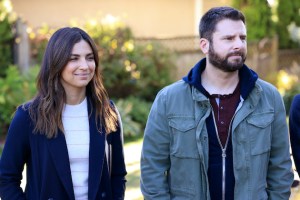 When they arrive back at the house, the gang is there: Rome, Regina, Gary, Darcy, Delilah, Theo, Sophie, Charlie and even Maggie (via FaceTime from Oxford). They’ve built ramps to the house’s front and back entrances, which touches Eddie. But he’s nearly undone when Katherine wheels him through the house to the backyard, where everything is set up for them to finally renew their vows the way they were supposed to the night of his hit-and-run.

So they go through with the ceremony. In his vows (which were written before the accident), Eddie acknowledges that he broke their original marriage pact — cut to Delilah looking chagrined (heh) — but that he is grateful for what they’ve built in the aftermath. He starts to cry a little as he references Jon’s “million little things” toast and says, “For me, people are the people who hold your hand as you take a million little steps in the right direction.” The whole shebang ends on an up note, with Eddie saying he can get through anything because of the love he and Katherine share. And when they kiss, everyone applauds.

Across the street, a man in a red pickup truck watches the group from afar. It’s the father of Alex, the woman with whose death Eddie thinks he might have been involved all those years ago. And he doesn’t seem very happy for the newly remarried couple. (Make sure to read our premiere post mortem to see what series creator DJ Nash has to say about that little twist.) 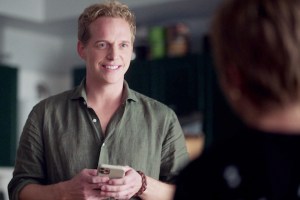 * Maggie’s new roommate in Oxford is a guy named Jamie (played by You’re the Worst‘s Chris Geere) with whom she has a very awkward first encounter.

* Gary and Darcy are going strong, but we learn that he never told her that he went to the airport to see Maggie before she left. When she gently confronts him with this fact, he apologizes, and they seem to get past it pretty easily.

* Fresh off their heartache with Eve, Rome and Regina have the opportunity to adopt a different baby that’s being born in another part of the state on the night of Eddie’s accident. When Katherine gives them her blessing to go and deal with it, Rome deeply wants to move ahead and try to put the loss of their potential son behind them. But Regina can’t shift her feelings so easily, and Rome eventually tells the social worker that they’re not going to adopt this new child. Long story short: Things are not OK between R&R.