Is it time for Titans‘ Starfire to shine? Has a S.W.A.T. team member gone missing? Is a #OneChicago romance ready for the next step? Read on for answers to those questions plus teases from other shows!

On Titans, will we get to see the planet Tamaran and more background on Kory (played by Anna Diop) now that her sister (promoted series regular Damaris Lewis) is fully in Season 3? –Malasha
“We’re planning a big season for Kory this year,” exec producer Greg Walker told Inside Line when I delivered your Q. “The arrival of her sister/nemesis Blackfire launches Kory down a path where she uncovers both secrets about her past and clues to her destiny… all of  which will lead to her true calling as Starfire. Plus, we have a few other surprises in store for hardcore Starfire fans this season.” (Reminder: Titans will now stream on HBO Max.)

Any scoop on Virgin River‘s Mel and Jack? –Bennie
EP Jocelyn Freid says that “when it comes to their relationship, Jack and Mel continue to face obstacles” in Season 2, which hits Netflix on Nov. 27. “Charmaine’s pregnancy continues to complicate their relationship and the choices they make, as does Mel’s past life with her husband,” Freid added. “But make no mistake, Mel and Jack’s connection is undeniable and they will fight to stay together whatever it takes.”

How will Mom change with Christy/Anna Faris suddenly gone? –Dee
“This season is really about the ensemble, which means we are going to get the opportunity to get to know all our characters better,” says co-creator Gemma Baker. For example, “We will see Wendy (played by Beth Hall) make a decision that comes as a big surprise to the group.” 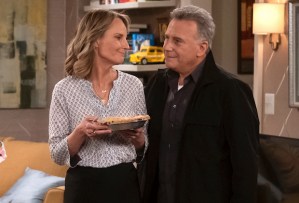 Long time reader, first time asker (I think). Is there any word on if the Mad About You revival will be made available to stream on a platform other than Spectrum? I grew up on the original and it’s killing me not being able to access the episodes. –Will S.
Right?? It’s a bit odd that a broadcaster didn’t snatch up those 12 episodes as fall schedule filler that most people truly haven’t had any chance to watch. I asked around and, alas, the revival episodes have not yet found a non-Spectrum home.

Can you tell me if Kenny Johnson has left S.W.A.T.? He has not filmed anything for Season 4 (premiering Nov. 11) and they began filming in August. –Natasha
Let’s just say that the looks of social media can be deceiving. “We have a few twists with Luca, especially early on, where we’re going to have him working on a larger project that may take him out of the city of Los Angeles,” EP Aaron Rahsaan Thomas teased during our in-depth Fall Preview Q&A. “But I don’t want to reveal too much just yet with that.” 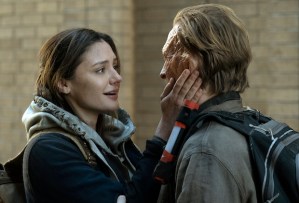 What gives? Fear the Walking Dead finally reunited Dwight and Sherry, and then they disappeared. How long do we have to wait to actually see them together? — Cleo
Can you hold out till Sunday? Because the Walking Dead crossover characters are front and center in “Honey” (AMC, 9/8c), in which we learn not only how the past is impacting Dwight’s long-lost wife in the present but that there may be an even bigger obstacle than the Rangers to the couple’s plan to take down Virginia: Morgan.

When is Heartland coming back? –Brandy
Are you asking on behalf of Canada (where Season 14 is set to air on CBC and CBC Gem in early 2021), or here in the US of A (where UP tv has not yet penciled in a timeframe)? 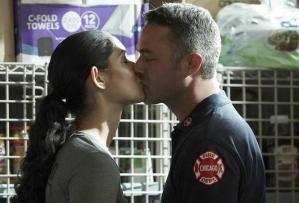 Will there be a Stellaride proposal/wedding this season on Chicago Fire? –Sarah
Showrunner Derek Haas gave us this cheeky answer when asked about what’s next for the couple: “I think they should take that next step at some point. Don’t you?”

Since Chicago Med’s Ethan is a specialist in infectious disease, will his expertise be use this season? –Aurora
The medical drama will “absolutely” tap into the doc’s expertise as part of its COVID storyline, co-showrunner Diane Frolov says. In fact, “when we first see Ethan, he is working in the special COVID ICU.” 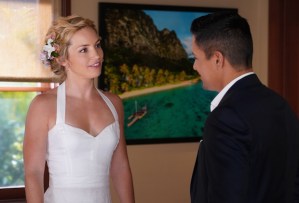 Do you have any Magnum P.I. scoop on Higgins’s new love interest? —Emilie
Dr. Ethan Shah (played by Daredevil‘s Jay Ali), a confident and charming surgeon at Kings Medical Hospital, first meets Higgins in the season premiere, when she gets injured. After successfully performing surgery on Higgins — and thus when she’s no longer his patient — he asks her out to dinner. And she presumably says yes!

Taye Diggs had a game show on The CW called Hypnotize Me. Did that get cancelled or is it put on hold because of COVID-19? –Willie
Hypnotize Me will not be back, no.

I know you can’t reveal much about the Supernatural series finale (airing Nov. 19), but can you at least tell us if Sam and Dean will have a common ending (either they both live or they both die)? I don’t want my boys to be separated in the very end. — Maria
“Sam and Dean started this journey together, and they are ending this journey together,” co-showrunner Andrew Dabb affirms. “Do they end it in the same place? Do they end it in the same way? Are they both on the same page when it ends? That remains to be seen in the last episode. But the show started about these two guys, and it ends about these two guys.” BONUS SCOOP!: In order to save Jack, Dean, Sam and Cas are “going to go to great lengths, and some huge sacrifices are going to be made along the way,” Misha Collins previews. 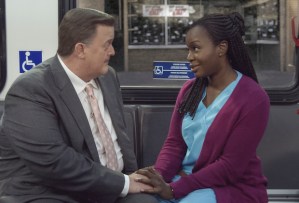 The second season of Bob Hearts Abishola is coming out in a few weeks and I am super excited for it. Have you got any spoilers about where some storylines may be going….maybe about let’s say….Christina and Kofo? –Angel
I’ve got nothing right now on Christina and Kofo, but I can tell you that in the Nov. 16 season opener, Abishola’s Uncle Tunde teaches Bob the art of negotiation when it comes time to buy an engagement ring. Alas, complicating any potential engagement is someone from Abishola’s past who has not been mentioned since early Season 1.

Any word on that Dark Shadows reboot announced a while back? –Andrew
Dark Shadows: Resurrections — which would have been a continuation of the 1969-71 cult classic, catching up with the supernatural Collins family in modern-day Collinsport, Maine — never made it to the pilot stage and at this point is no longer in development at The CW.

If you want the Inside Line on a favorite show, email InsideLine@tvline.com! Questions left in Comments will not be read and may count against your final score. (With additional reporting by Vlada Gelman, Charlie Mason and Ryan Schwartz)