In hindsight, hints to the identity of The Masked Singer‘s Squiggly Monster — who was booted from the reality singing competition Wednesday — were everywhere you looked.

The reference to being a “patchwork of personas,” including “the father-figure” (hello, Full House‘s Danny Tanner!) and “the scoundrel” (hello, Saget’s often blue stand-up comedy leanngs!). The penguins, a reference to 2007’s Farce of the Penguins, a March of the Penguins spoof he directed. And above all, the pratfalls, banana-peel slips and footballs to the crotch that seemed to show up whenever Squiggly Monster’s clue package rolled — all a nod to his long stint as host of America’s Funniest Home Videos. (Read a full recap.)

Yep, the man in the Squiggly Monster costume was Bob Saget. When TVLine chatted with him Wednesday, we immediately brought up his heretofore most recent Masked Singer affiliation: when everyone thought he was the Taco in Season 3. 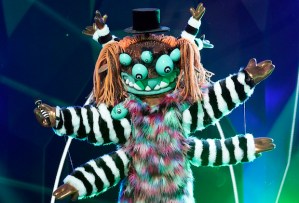 TVLINE | So wait: I’m a little let down that you weren’t the Friggin’ Burrito, as you alluded to when everyone thought you were Taco.
I know, and I kept saying, “I’m not the Taco,” and Tom Bergeron was playing along with me. But everybody knew that this was me, it seems like. It kind of gave it away, my height. It was very funny when someone guessed Dr. Fauci. It was like, someone three feet shorter than me? With Squiggly’s head, I think I was a good 9 feet tall. It was really fun. I wanted to keep going. The joke today I’ve been spinning is, “I demand a recount. This is unaccepatable. This is a fraudulent vote. I want the Zoom audience to re-vote.” I did have one more song to do, which would have been Johnny Cash’s “Folsom Prison Blues.” Which was hilarious as Squiggly.

TVLINE | Was I mistaken, or were there blintzes in one of your clue packages?
Oh yeah, the blintzes is something nobody would get. That’s so funny that you mention that. When I was 16 or 17, I made a very, very bad Super 8 movie called Beach Blanket Blintzes. And the only way you would know that is if you read my book, Dirty Daddy, or maybe heard me in an interview. So it’s a Googleable thing. But it’s about a 50-foot blintz that turned people into sour cream. And it’s the worst thing ever made. Literally. It was an hour long and I made people see it because I put all their kids in the movie. It was two projectors and it was just a nightmare. But the penguins was a movie I actually made called Farce of the Penguins. That was a real clue. That was one you could figure out. There’s something real special about that show… When they say, “Take it off! Take it off!,” it’s the closest I’ve felt to being a stripper. And then they pull on your head, and then they go to commercial.

TVLINE | I think you threw a lot of people with the “My fellow Americans” thing and political references.
Yeah, that was weird. Stamos and I, I’d posted a thing on Instagram where I was going to run for president. That was during the Democratic National Convention or right before it, so we made a poster with that poster app, where you look just like all the other posters. So we were going to be president and vice president. So maybe that’s what it was. But also it was about, I love performing because it brings people together, and I like to bring all people together. I think someone asked, well now they always ask “Would you run for president?” because now all bets are off, anybody can. [Laughs] Squiggly would be a good president right now. He’d be there for every color of the rainbow. He’s got those lobster claws, so he could cut ribbons at markets and stuff. I don’t know what that political thing was. I think it was just about unity and bringing people together, that kind of thing.

TVLINE | You mentioned Stamos. Have you heard from any of your other Full House or Fuller House co-stars?
I got a video message from Candace [Cameron Bure] last week, with Marilu Henner in the background, screaming, “You’re Squiggly, aren’t you? You’re Squiggly! I know you! I know that voice, I know those movements! That’s how you move! That’s you!” And I answered, “I don’t know what you’re talking about. Thank you so much for thinking that.” [Laughs] It’s like CIA stuff. It’s all totally confidential. It’s hilarious. I had my wife and one of my daughters, and Stamos signed an NDA, so nobody can talk. It’s like CIA.