Is it just me, or does this season of The Masked Singer seem harder to solve than usual?

I feel like by this point in the proceedings, we’re usually pretty sure of at least half of the performers’ identities. Maybe it’s the 2020-ness of it all, or maybe my brain is just too preoccupied with the future of the American republic and such, but on a number of Season 4’s remaining competitors, I’m stumped. Like, who in the actual who is Jellyfish? It’s making me crazy!

That said, this week’s installment of the fever-dream reality show gave me a few ideas about who’s left, so maybe there’s hope. So review the performances below, find out who went home (and who it was), then hit the comments with your thoughts on the season thus far.

MUSHROOM | The overall motifs of the clue packages this season are frustrating in a way I’m sure is by design: Do the repeated allusions to Mean Girls in Mushroom’s video have any significance to the fungi’s identity? Or are they just a way to weave together some coherence out of the most random of hints? Thankfully, Mushroom’s performance of “If I Could Turn Back Time” by Cher a) was pretty kickass (the power on that last note!) and b) did more to give me an idea of who he might be than anything else that’s happened so far. Clues included: North Spore High School, a buck and Season 3’s Kangaroo (buckaroo?), two black beetles and references to being a “nerd” and an “outcast.” This week’s clue schtick involved rubbing a magic lamp to reveal a bonus clue; Mushroom’s was a red gelatin mold of the brain. (My guess: American Idol alum Adam Lambert.) 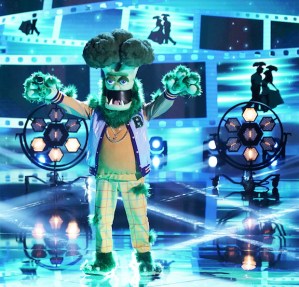 BROCCOLI | Broc’s song selection this week — Lionel Richie’s “Hello” — showed off his vocal abilities better than last week’s more upbeat number did. Still, I get the sense that he’s a singer whose prime years are in the past. Clues included: references to Goodfellas, Copabanana (Copacabana), cabbage, a guitar, 6 am, Hawaiian pizza, an anchor and the numbers 3-7-2-6-5. Lamp clue: a roulette table stopped on black 26. (My guess: “Put Your Head on My Shoulder” singer Paul Anka.)

SQUIGGLY MONSTER | “As a little squiggle, I was bullied for being different,” SM told us in his clue package, which I scrambled to write down in my notes until I remembered that pretty much every Masked contestant has said something similar at one point or another, and it actually doesn’t ever help us figure out who they are. He sang the Rolling Stones’ “(I Can’t Get No) Satisfaction” and did an able job — but in a season with such vocal talent, the average crooners seem even more average, no? Clues included: the Oval Office, “an inconvenient truth,” a football kicked into someone’s crotch, blintzes and a pineapple. Lamp clue: a large teddy bear. (My guess: I knew who Squiggly Monster was before I viewed the episode, so I recuse myself from this one. But before I found out, I thought he might be Glenn Beck, and that was really wrong.) 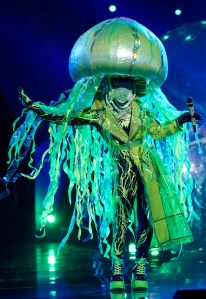 JELLYFISH | Having seen her perform twice now, Jellyfish feels to me like an actress who can sing but who does not do so often/has not done so publicly very often. She exhibited very nice vocal control on Patsy Cline’s “Crazy,” which certainly was more confident than her showing in last week’s episode. Clues included: a film projector, U.S.S. Big Bird, yoga, 7:20 and a mention of how her dad would wake her up early in the morning to drive her to “gigs.” Lamp clue: a stuffed tiger. (My guess: Modern Family‘s Ariel Winter.)

THE UNMASKING | When Squiggly Monster was unmasked, he was revealed to be Full House/Fuller House star Bob Saget. (Go here to find out which of his Full House co-stars was in on the gag!)