The Good Doctor will face a whole new set of challenges in Season 4, beginning with, yes, the coronavirus pandemic. But beyond that, as the medical drama looks to a post-COVID world, Dr. Shaun Murphy will have to balance his newfound duties as both boyfriend to Lea and supervisor to a flock of first-year residents.

Here, series star Freddie Highmore previews Shaun’s struggles at the height of the COVID-19 crisis, how his relationship with Lea (played by Paige Spara) will differ from his previous relationship with Carly (Jasika Nicole is no longer a series regular), and how he’ll take to his new role as a boss.

TVLINE | Shaun thrives when faced with difficult medical mysteries, but COVID-19 is in a league of its own. How is he handling that uncertainty as the pandemic reaches St. Bonaventure?
Shaun struggles to adapt to situations that he hasn’t prepared for in his mind in some way, whether that’s having researched a particular topic or knowing something from a textbook. With this huge uncertainty of the virus arriving to the world and, of course, to the hospital, he’s going to have to learn to not feel as prepared as he usually does, and try to rely a little bit more on instinct instead of scientific, absolute fact — especially in these early days of the pandemic that we start our show with. 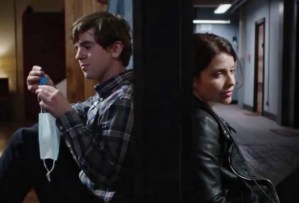 TVLINE | Shaun and Lea are finally a couple. How is he juggling his new relationship with these new and unprecedented challenges at work?
It’s certainly a challenge. The exciting thing this year is getting to see Shaun and Lea in a more mature relationship. I think we’ve had that early dating fun with Shaun, with Lea, and with Shaun and Carly. [We’ve seen] all of them individually figure out whether they like each other and whether they want to be together long term. This season, we get to explore the deepening of a relationship and their bond, and what that means.

The first two episodes are primarily focused on [the pandemic], which will mean that [Shaun and Lea] can’t be together. They’re dealing with what so many of us have been dealing with these last few months of being separated from the people that we love, and doing it because we love them and want them to be safe.

TVLINE | Looking beyond the two-part premiere, what sorts of firsts do we see Shaun and Lea navigate early on in Season 4?
As roommates, they were living together. It’s very different when you’re living together as a couple — when you’re sharing every single space in this apartment, when you’re sharing the same room, when you’re sleeping in the same bed… There are different challenges of not feeling like you have your own space in the same way you’re used to. And Shaun has always struggled with change in some way, or something outside of the norm. I’m not sure whether Lea is going to want to sleep on a mattress on the floor forever [which is Shaun’s current setup]. They’ll each be forced to make compromises, as all of us do in relationships — and that doesn’t need to be a negative thing. It just means that you can’t just think individually, purely about yourself when you’re with someone else.

TVLINE | Shaun will be supervising first-year residents this year. How does he take to having that responsibility?
I’m really excited about that. It’s getting to see Shaun try and be a boss for the first time and, as you say, take responsibility for other people. He is great at imparting his medical wisdom and all of that knowledge he has accumulated. At the same time, he will definitely struggle, and perhaps even dislike, other aspects of the job — when it comes to more pastoral care, but also teaching [residents] how to interact best with patients. Shaun himself struggles with that, so he’ll certainly struggle to teach others that.

That will be a great arc for [Shaun] this season, as we see him being forced to let go of control. I think that’s what being a boss means. He can’t supervise every single decision that these new residents will take, and it isn’t helpful for them — and long term, it isn’t helpful for the structure of this hospital. He is someone who perseverates on an idea and gets fixated on things, so it will certainly be tricky for him to resist that temptation to just do the work for someone else rather than teach them how to do it.

TVLINE | And how do the newbies take to his supervision? Does he struggle with any one of them specifically?
I feel like they each take to him in a different way, but Shaun is curious about all of them. He’s not the sort of person who prejudges peoples. When he asks questions, questions that may very well [be] slightly inappropriate, he doesn’t do it because he’s trying to be mean; he does it because he is genuinely trying to understand the other person. Shaun is constantly trying to build bridges between people, and sometimes he goes about it in the wrong way. And in times that are so divisive, when we often prejudge the other person before we’ve even met them or heard them try to explain their idea or their opinion, I think Shaun is a refreshing antidote to that who tries to take each person as an individual and figure out where they’re from and why they’re here — and in this case, why they’ve come to this hospital and what their opinions are. He may seem blunt, but he always comes from a place of trying to understand. 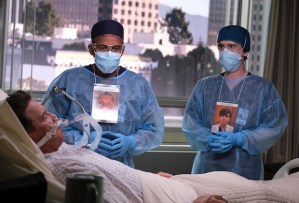 TVLINE | Shaun worked so hard to prove himself as a surgeon over the last three years. Does he face similar scrutiny as a supervisor, from his own superiors?
Yes, he is certainly scrutinized in terms of how he is doing in that regard. The people who are coming in below Shaun have opinions of him, too. And so, in a funny way, he has that from both sides this year, in terms of people watching him and having opinions of him and his performance.

The Good Doctor‘s two-part premiere kicks off Monday night (ABC, 10/9c). What do you hope to see from its fourth season?