Sibling relationships can be hell.

Just ask Daimon and Ana, the brother and sister at the center of Hulu’s new horror series Helstrom. When the series drops in its entirety on the streamer Friday, audiences will be introduced to the pair, two members of an estranged family that has seen its share of demons — both emotional and literal.

The hour-long drama from Marvel Television and ABC Studios is based on the Marvel comic of the same name, but executive producer Paul Zbyszewski says no prior knowledge is necessary to get sucked into the Helstrom family’s scary saga.

“We take the spirit of the comics, and those characters, and tell a very different story,” the EP tells TVLine. “Like, we didn’t go back in and go, ‘OK, we’re going to do that run from Marvel Spotlight 12 to 24, and that’s our first season.’ We didn’t take that specific arc.” Instead, he explains, “We built stories of our own for these characters, based on who we wanted these characters to be.”

In addition to Zbyszewski, TVLine spoke with cast members Tom Austen (The Royals), Sydney Lemmon (Fear the Walking Dead) and June Carryl (Mindhunter) about what to expect from the 10-episode first season. Read on for all the spooky specifics.

WHO’S WHO | Austen’s Daimon is a college professor/exorcist who has, let’s say, a healthy disdain for the Catholic Church and anyone who works with it. Lemmon’s Ana is a wheeler-and-dealer in San Francisco who’s at the height of her career when circumstances conspire to reunite her with her estranged brother, whom she hasn’t talked to in a decade. Their mother, Victoria (played by Homeland‘s Elizabeth Marvel), has been in a psychiatric facility run by Carryl’s Dr. Louise Hastings for years. And their dad? Oh, he was a mysterious (and prolific) serial killer. The cast also includes Ariana Guerra (Raising Dion) as Vatican representative Gabriella Rosetti, Alain Uy (The Passage) as Ana’s assistant Chris Yen and Robert Wisdom (The Wire) as one of Ana’s mysterious colleagues known as Caretaker. 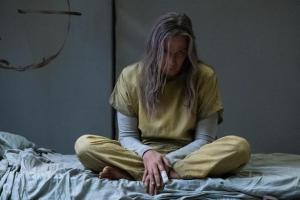 HOW EVIL IS IT?  | Though the comics make it clear that Daimon and Ana (short for Satana)’s pop is Beelzebub himself, the show purposefully makes the matter a lot hazier. Was Daddy Helstrom a demon? Was he just the worst kind of human being? And how far, exactly, do the evil apples fall from the tree? “Our origin story is, we are taking from the comics, but this is a darker, grittier, more psychologically-grounded take, I think,” Lemmon says. “There’s an amazing speech that Caretaker has, where he describes Daimon and Ana’s father as being pure evil, and that kind of says it all. That can be whatever you want it to be. Obviously, in the comics, it is literally Satan. We don’t ever use that word in this show, but the idea of the essence of pure evil is absolutely what is inside of them.”

ON A SCALE OF 1 TO AVENGERS… | Not a comics person? No worries, Austen says. “The cool thing about the show is, it’s as Marvel or as un-Marvel as you want it to be. If you’re there for the stunts and the action and the supernatural powers, then you’ve got it. If you’re there because you want to watch a drama about a family struggling to make it through life, that’s there, too.”

YOU MAY ENJOY HELSTROM IF… | … you enjoy Fox’s The Exorcist series adaptation, CBS’ Evil or Hulu’s Castle Rock  — all of which deal heavily with the teetering balance between good and evil. In addition to overseeing the hospital where Victoria Helstrom is a longtime patient, Carryl’s character has a history that involves both deep devotion to religious faith… and more than a healthy bit of skepticism about the world at large. “You know, in Constantine, Gabriel says to Constantine, ‘You don’t have faith, you just know. You just happen to know the truth,'” Carryl says. “Louise is on the other side of that. It’s like, ‘Yes, I know, but I still believe — probably partly because I know.'” That distinction, she adds, “sustains her faith, and it helps her to see Daimon, Ana and Victoria as beings worth protecting.”