This week’s Masked Singer focused its energies on plumbing the contestants’ childhoods for clues, which was ironic, given that The Child… er, we mean Baby Alien, was booted at the end of the hour.

In between the last episode and this one, I had become convinced that Sacha Baron Cohen was behind the tiny extraterrestrial. After all, there’s a new Borat movie coming out soon, and Cohen loves himself some stunt marketing. And what better cover than hiding in plain sight by doing the Borat voice, like Baby Alien did in all of his interviews and clue packages? All the pieces fit… except they didn’t, and Baby Alien turned out to be someone else entirely.

Read on for a quick recap of the Group B Playoff performances and the reveal. 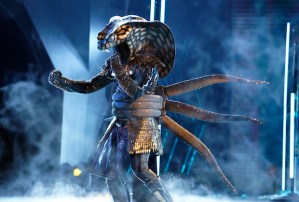 SERPENT | I can hear what some of you have said about Serpent sounding like Hamilton‘s Christopher Jackson, but in his excellent performance of Maren Morris’ “The Bones” this week, the raspy quality of his voice was more pronounced and made me think he’s not the erstwhile George Washington. Clues included: a baby bottle on wheels, a croissant with bacon, $2, scrubs and a stethoscope on a mannequin, references to “gatekeepers” and the “gateway” and discussion of how he worked manual labor and “sold clothes” to get by. (My guess: “Back at One” singer Brian McKnight, but basically just because of that delicious rasp.)

CROCODILE | Croc’s got daddy issues, he told us in his set-up package, because his father didn’t believe in his talent when he was younger. In the music-box-style intro to Britney Spears’ “Toxic,” his falsetto was impressive; I can’t be certain, but for whatever this is worth, it definitely sounded like he didn’t change the pronouns in the song. Holler in the comments if you heard differently. Clues included: a skull-and-bones flag, an American flag, House #5, hair spray, an orange tree, “Shazam” and a piñata filled with dolphins. (My guess: Backstreet Boys’ Nick Carter.) 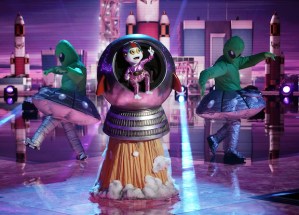 BABY ALIEN | Baby Alien continued his trend of sounding like someone who can sing but who is not a professional singer, doing a good job with Imagine Dragons’ “It’s Time.” Clues included: Sand horse, “I’ve been roasted before,” a hot dog with ketchup and mustard, a fire hydrant, a crown and “Win! Win! Win!” (My guess: Borat star Cohen, whom you already know is not the correct guess. Ah well.)

WHATCHAMACALLIT | I’d love to pick the brain of the costume designer who decided that Whatchamacallit just needed a single eyeball poking out of all of that shaggy fur. The random peeper is unsettling, which I suppose is the point. Anyway, the big guy performed “Money Maker” by Ludacris feat. 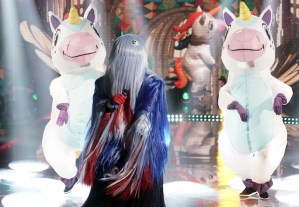 Pharrell Williams, and while he didn’t sound like 50 Cent, one of his clues — five dimes — made me think he’s someone who’s 50 Cent-adjacent. Other clues included: “36,524 brush strokes,” references to an ailing mother, Hairy Tales of the Whatcha Fam by Doodad Doohickey and balloons. (My guess: Still ???)

SEAHORSE | Forget Jack slipping off that section of floating door: I was dead when Seahorse had her way with Celine Dion’s “My Heart Will Go On.” It was just so good! I don’t know what “unimaginable loss and pain” Seahorse has experienced in her life — as referenced in her clue package — but she was certainly channeling something in that very strong performance. Clues included: a blue balloon filled with feathers, Daisy dukes, fail, five clocks reading 9:00, “a dream is a wish your <3 makes” and a smile with dirty and/or cracked teeth covered by a NO circle-and-line. (My guess: singer-songwriter Tori Kelly, who I for some reason thought was a country singer and was so sure of that that I didn’t double-check it, and my extreme bad.)

THE UNMASKING | When Baby Alien was unmasked, he was revealed to be former New York Jets quarterback/current ESPN analyst Mark Sanchez. (Read his exit interview here.)