Warning: This post contains spoilers from Wednesday’s The Masked Singer.

Every team has a Most Valuable Player, and to hear the man inside The Masked Singer‘s Baby Alien tell it, Season 4’s MVP is someone named Ron Binion.

Who is that, you ask? None other than the Fox competition’s in-house puppeteer, who helped former National Football League player Mark Sanchez bring Baby Alien to life.

Sanchez, a quarterback whose career included stints on the New York Jets and the Philadelphia Eagles among other teams, was this week’s castoff. (Read a full recap.) On Wednesday, TVLine chatted with the former pro — who’s now an ESPN analyst — about his brief time on the show and about how his 3-year-old son Daniel wound up being a surprisingly effective training partner. 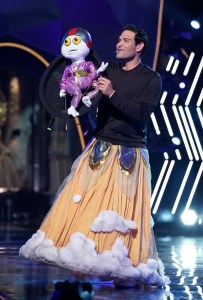 TVLINE | I can’t find anything in your background about a puppetry career, so tell me what it was like to have that skill thrust upon you.
This was something totally different. I’m really thankful to the people at The Masked Singer and to Ron [Binion], the puppeteer expert and coach, who taught me some basics early on and then kept really expanding upon those basic skills to try to get the most out of the puppet’s personality, out of Baby Alien. He gave me some easy pointers. He’s like, “Just like a car or any kind of machine, you calibrate it to what it can and can’t do, where it can and can’t go. You need to do that with your wrist immediately when you put it in the puppet: how far right, how far left, how far up, how far down? And then make circles and figure out your range.” And once you know all those extremes, you know your boundaries and you work within those boundaries.

And then you take into account what setting you’re in. There’s essentially four judges and a crowd that you’re puppeteering for. So that was the first thing. He set the stage there. After that, we continued to work with certain notes, rehearsing with the song, rehearsing it at home, rehearsing with him on Zoom of where to put the puppet’s head placement, his hand, how to work all that. So he was instrumental in Baby Alien coming to life.

TVLINE | I love that even though you’re no longer a pro athlete, you’re still on the sidelines, stretching out Baby Alien before the big game. I can picture it, rolling his little neck…
[Laughs] Oh, 100 percent. The physical side, the creative side and the time on task. There’s no substitute for practice. That rings true in football and life and if you’re trying to work a puppet for The Masked Singer. It was the same thing. Every chance I got, whether it’s other songs I wasn’t performing, I would mouth those songs with the puppet. Or I would read to my son with the puppet and make his personality come to life and show a surprise reaction when my son said something that surprised me or him laughing or sad or whatever, and I’d really rehearse those emotions with him because it makes it fun. Because your kids are so unpredictable that he’s he perfect practice player for the puppet. Him and the puppet got pretty close. It was pretty cool.

TVLINE | What was the easiest emotion to convey? What was the hardest?
Anything mouth open was pretty easy, like surprise or laughing. That kind of stuff. The ones that became a little more advanced was when he was scratching his head or questioning something or rubbing his chin, those came very late — almost one or two days before the performance. And the other ones were just so second nature at that point.

TVLINE | I have to admit, I thought you were Sascha Baron Cohen in there. Congratulations, you totally fooled me.
I appreciate that.

TVLINE | The accent was a commitment. What was the decision behind that?
[Laughs] Yeah, I thought it was a great way to throw the judges off to make sure they couldn’t catch on. And then that essentially took on a life of its own. I started doing the interviews like that, talking to people in the trailer like that. It just became something that you practice. I love that accent so much. I think it’s so funny, and nobody had really done it in the prior seasons. I thought, “This is perfect.”

TVLINE | Let’s talk about the difference between putting yourself out there as a pro football player — where you’re immediately aware of what the fans think of you on the field — and going out in front of the Masked Singer judges. What was more nerve-racking?
Ooh. It was a very similar rush that you get from running out on the field. I would make the comparison in football, to really get in the game, I would feel like the game was started — it wasn’t the opening kickoff, or the first snap or anything. It was like, “I’ve got to get one completion, complete a pass, and get knocked down.” Once you get knocked down on the ground and pick yourself up, boom. OK. I’m in the game. And that’s when it really started.

So for The Masked Singer, you wear an earpiece to hear the music. So you can sing along with the music. And there’s these clicks that go off in the headset, like a 4-3-2-1 that let you know, “Hey, we’re starting. The music’s going to start.” And both songs started almost immediately after the music. There was no real intro, because you only have a minute-thirty. So that was the first thing. And then there were points in each song — when I got to the first chorus of “Faith” and then tonight’s episode, there’s a call-and-response section to the judges where I’m like, “C’mon judges, on your feet!” Both of those moments in each song were like, “You’re in there. This is happening.” And you get in the flow of the performance. I needed those things to happen: Hear the clicks and hear that point in the song, and then I felt good.