For once, Ken Jeong wasn’t the only thing droning on and on during The Masked Singer.

This week’s episode introduced the latest (and maybe the only) technology in socially distant clue-delivery: Small drones that buzzed by the judges’ panel, towing items designed to help Robin Thicke & Co. — as well as returning guest judge Joel McHale (Community) — figure out the singers’ identities.

Did the clues shed any light on the question marks under the masks? Let’s see as we recap the Group A playoffs’ performances:

POPCORN | Harry Styles’ “Falling” gave Popcorn ample opportunity to show off how she could emote using only her voice, and as Thicke pointed out, she did so very effectively. Her drone clue was a planet. “The second rock from the sun may be far away, but it should bring you closer to me,” she told the panel. Other clues included: A soap parody titled The Corn and the Beautiful, a rainbow flag, cats, 16, a hair crimper and a Rubik’s Cube. (My guess: “Love Will Lead You Back” singer Taylor Dayne.) 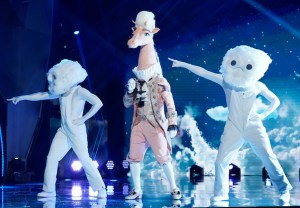 GIRAFFE | Giraffe apparently is battling what seems like physical trauma in his recent past, if I’m correctly interpreting his set-up package comments about a “terrifying episode that scrambled my brain.” But his rendition of Kool & the Gang’s “Get Down On It” was very smooth, a big improvement from his premiere performance. His drone clue was a domino with eight dots, and other clues included: Masked Season 2 winner Fox, peaches, a museum, “Recently, my whole world came crashing down” and mention that the aforementioned “terrifying episode” left him barely able to walk or talk. (My guess: rapper Vanilla Ice, but I’m feeling less certain of that by the week.)

SNOW OWLS | I’m so torn on the duo costume. When they sing — as in this week’s “Like I”m Gonna Lose You” by Meghan Trainor and John — their connection seems so intimate, I’m convinced they’re a romantic pair. But then their set-up packages are so yuk-yuk, I get a siblings or best-friends feel. The dissonance is a little disturbing. This week’s video talked about how the female half of the team got the male half through a bad breakup, when he was “swept up in an avalanche of emotions,” and how he encouraged her to take an opportunity “fit for a queen.” The drone clue was a witch’s hat, and the other clues included: “anchor management,” a D with lights in it (delight?), a basketball with the letters DAL on it, a bouncy castle and the female owl’s assertion that she was the male owl’s “anchor, despite beaklash from our community.” (My guess: Maybe country-music couple Clint Black and Lisa Hartman Black, maybe Dancing With the Stars spawn Derek Hough and Julianne Hough. What? It’s still early in the season — I can hedge!) 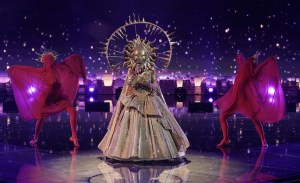 SUN | “I missed out on a lot of my childhood, growing up in a fractured home,” Sun told us, opening a pre-performance video with visuals like a red hourglass, spiders and a greenhouse. I was confused by her offering of what what seemed to be a clue (“I love dirt in my toes, a memory of mine, and the land that slides as my heart walks the line”) and then moved by her performance of Kesha’s “Praying.” Her drone clue was a Magic 8 Ball; other clues included: flowers and plants, going “into the woods to find harmony in nature,” candy canes, a lock of blonde hair and a mention of “like-minded, immaterial girls.” (My guess: I got my country singers mixed up — I meant to write Leann Rimes.)

THE UNMASKING | Giraffe was picked to go home this week. When he was unmasked, he was revealed to be Beverly Hills, 90210 grad Brian Austin Green. (Hear what he had to tell TVLine about his stint as a very tall, exceedingly fancy safari animal.)