Warning: This post contains spoilers for Wednesday’s The Masked Singer.

After the health problems The Masked Singer‘s newest castoff has experienced in the past few years, donning a giant Giraffe costume and executing choreography while crooning Kool & the Gang was no sweat.

When Giraffe’s mask was removed at the end of Wednesday’s episode (read a full recap), the singer underneath was Beverly Hills, 90210 alum Brian Austin Green — who in the past several years struggled with a variety of neurological and other problems, some of which were related to an automobile collision with a drunk driver in 2014.

In a phone interview with TVLine Wednesday afternoon, Green took us through his experience on the wacky reality show… then took us to task for missing a (in hindsight) rather obvious clue. Read on for the conversation. 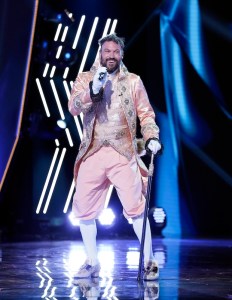 TVLINE | I obviously don’t want to re-traumatize you, but it seems like maybe you had a little bit more of a decision to make about putting on a costume than other people in this competition have had to make, from a physical standpoint.
Not so much. The vertigo was part of a bigger problem. I had ulcerative colitis and then I had vertigo, and all of it was undiagnosed. The vertigo, they tried the positions and all the stuff and it didn’t work. What’s going on? I was like, “Well, that sucks, because I’m super f–king nauseous, and I can’t get out of bed.” I’d been in bed for like three months. And then that went away, and then I had the neurological stuff. And that was the worst, because I had to recoup for years from that, and that was a big deal. So it all started in the gut and it was a dietary thing. Once I understood that, I did a cellular detox and I was fine.

So going into Masked Singer, it really wasn’t about that for me as much as it was like, it’s all trial-by-fire for me. I haven’t danced in a long time. I haven’t sung in a long time. The last time I raced cars, I was rehabbing from all of that. So it was like, I’m just going to go for it. I’m going to do all the stuff I really shouldn’t be doing, just to prove to myself that I can. So then, when I could, it was like cool, I can still do this stuff. I’m still capable of this. So it was really therapeutic for me. But no, vertigo is terrible. I wouldn’t wish it on anyone.

TVLINE | That sounds terrible.
I had three months of debilitating, I couldn’t lift my head off the pillow because I would get nauseous. So I would go see specialists and Megan [Fox, Green’s wife] would drive me, and I would have to take a Ziploc bag in the car because I’d be so nauseous, I’d be throwing up the whole time. And I averaged throwing up 15 to 20 times a day. It was unbelievable. The neurological stuff that I went through sucked, having stroke-like symptoms and having to rehab from all that is terrible. But looking back on it all, the vertigo issue was the worst. I normally am not one of those people that goes on rides and gets real nauseous or has motion sickness or any of that. So having that then was something I had never experienced before. But yeah, Masked Singer didn’t trigger any of that, thank God. [Laughs] It posed its own challenges. Having to sing and dance in that mask, in an 8-foot costume and all of that? With really limited vision — I had a little sliver in the neck I could see out of. It was what I imagine being a Cylon from the original Battlestar Galactica. [Laughs] It was this really thin, little, I couldn’t see up or down. I had no peripheral vision, so I could only see what was right in front of me. And even then, it was still very limited because you’re looking out of these mesh cutouts that they’ve incorporated. It was challenging, but it was super fun.

TVLINE | You have four kids, three of whom are on the young side. Are they into the show?
No. [Laughs] I took a picture [of the premiere episode] when Giraffe premiered and the show premiered. I thought it would be fun, like, “Hey, with the kids! Let’s all watch it together!” And I took a picture because they fell asleep by 8:15. They were out cold. I took a picture of all three of them sound asleep on the couch. I was like, OK, this didn’t work out the way I had planned. Nothing ever does. That’s the problem with having any sort of expectations: You’re always a bit let down from them. So I’m going to try and get them to watch the show for the reveal, but the chances are, they’re not going to make it.

TVLINE | Did you have any say in how Giraffe looked? Because he was a very fancy individual.
You know what? I try and stay in my lane if possible. When they called me about the show. They were like, “What costume ideas do you have?” And I went, “I want the wardrobe department and the costume department to just go for it, to just think on their own what they think I would like.” They presented me with two costumes: It was that one, and it was the Serpent costume. Giraffe just seemed to fit the most. It excited me the most and it fit the closest to my personality. It wasn’t threatening at all. It just seemed like I could do the most with that… I left it up to them. They’ve won Emmys doing exactly what it is they do. What kind of a–hole do I think I am to say my costume should be what? [Laughs]

TVLINE | Let’s talk about that drone clue: Please explain the domino.
Are you serious?

TVLINE | Dude, my inner 12-year-old, 90210-freakout fan is really hurt. You just wounded her, hard.
[Laughs] I’m sorry. I’m not disappointed like your parents would be. [Laughs] I was in the movie Domino.

TVLINE | Arrgh! That’s so stupid that I didn’t get that!
And the domino had four dots on it, and I have four kids.

TVLINE | Oy. Well, then.
Hopefully now you share the disappointment with me. It doesn’t seem quite so upsetting, because you’re like, “I’m a little disappointed in myself.” [Laughs]

TVLINE |  I did miss the domino clue, but we’re in the middle of a pandemic. I’m cutting myself a little slack there.
But the pandemic is a perfect opportunity for you to bingewatch, and you should’ve bingewatched that movie. [Laughs] Since the pandemic is still going on, it’s not too late. And my unveiling isn’t until tonight anyway — so you have time. [Laughs]