The sweeping estate at the center of The Haunting of Bly Manor may be an ocean away from the crumbling walls of Hill House. But once you’re inside, make no mistake: These abodes of abject horror definitely were built by the same architect.

That person is series creator Mike Flanagan, who follows up his 2018 Haunting of Hill House success with the similarly scary-and-moving Bly Manor. Based on several works by novelist Henry James, the nine-episode season — which begins streaming in its entirety Friday — is the second chapter in an anthology that Flanagan has said is as much about haunted people as it is about haunted houses. “And as Steve Crain said last season,” the executive producer wrote in a note to reporters covering the show, “‘There’s no shortage of either.'”

Given Netflix’s spoiler restrictions, there’s a lot we can’t tell you about how the literal horror show unfolds. But what we can reveal is, to quote a favorite phrase of one of Bly Manor‘s residents, perfectly splendid. Plus, TVLine chatted with returning cast members Victoria Pedretti, Kate Siegel and Oliver Jackson Cohen and series newbie T’Nia Miller — all of whom teased a story packed with scares, emotional wallops and, yes, Easter eggs to keep fans entranced.

Read on for some choice tidbits and trivia about The Haunting of Bly Manor. 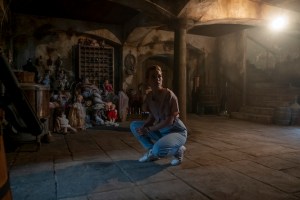 THE SOURCE MATERIAL | James’ novella The Turn of the Screw, which chronicles a young nanny’s scary experiences in an English country estate, was the first work Flanagan cited as inspiration when Netflix greenlit a second season in 2019. But Bly Manor also pulls heavily from James’ The Jolly Corner (in which a man confronts a manifestation of his alter ego) and The Romance of Certain Old Clothes (in which a trunk of gowns figures heavily in the complicated relationship between a pair of sisters).

And in the same way that Shirley Jackson’s The Haunting of Hill House was a jumping-off point for the first season, viewers shouldn’t expect a strict adaptation of any of James’ writing in Bly Manor. “I read it back when I was at school,” Jackson-Cohen recalls, and he bought a copy to read on the flight home after visiting the Bly Manor writers’ for the first time. “I said, ‘Oh, I’ve got The Turn of the Screw to re-read, and Mike said, “You don’t need to.'”

THE SETTING | True to its name, The Haunting of Bly Manor unfolds at a grand British country home. Though the property’s history is explored throughout the season, the bulk of the action takes place in the 1980s.

WHO’S BACK | Siegel, Pedretti and Jackson-Cohen are joined by fellow Hill House alum Henry Thomas. Pedretti notes that Flanagan “felt very strongly” that her character, Dani, wouldn’t be a doppelganger for Hill House‘s Nell, so she changed her hair color. “If I just showed up looking exactly like Nell, and in the same universe, that would be very confusing,” she says. 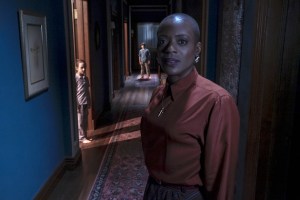 THE STORY | Per the official logline: “After an au pair’s tragic death, Henry Wingrave (Thomas) hires a young American nanny (Pedretti) to care for his orphaned niece and nephew (Smith and Ainsworth) who reside at Bly Manor with the estate’s chef Owen (Kohli), groundskeeper Jamie (Eve) and housekeeper Mrs. Grose (Miller). But… centuries of dark secrets of love and loss are waiting to be unearthed in this chilling gothic romance. At Bly Manor, dead doesn’t mean gone.” Or, as Miller sums it up, “All is not what it seems at Bly Manor.”

ARE THERE HIDDEN GHOSTS THIS TIME? | Siegel confirms that, much like Hill House, viewers are going to want to pay close attention to the backgrounds of Bly Manor‘s scenes, as well as nods to previous James adaptations like the 1961 film The Innocents. “The plot,” she teases, “is only the jacket of the outfit.”