The #OneChicago dramas are, once again, coming together for a crossover of sorts: In TVLine’s exclusive poster for the new seasons of Chicago Fire, Chicago P.D. and Chicago Med, the NBC first-responder franchise fittingly declares, “Together we are stronger.”

It’s certainly not the first time the shows have teamed up, with characters frequently visiting the sister dramas to save lives, catch criminals and even stop the spread of a deadly bacteria. And with the real-world COVID-19 pandemic affecting the fictional world of #OneChicago, we wouldn’t be surprised if the firefighter, medical and police departments find themselves relying on each other even more in the future.

Check out the poster below, then scroll down to keep reading. 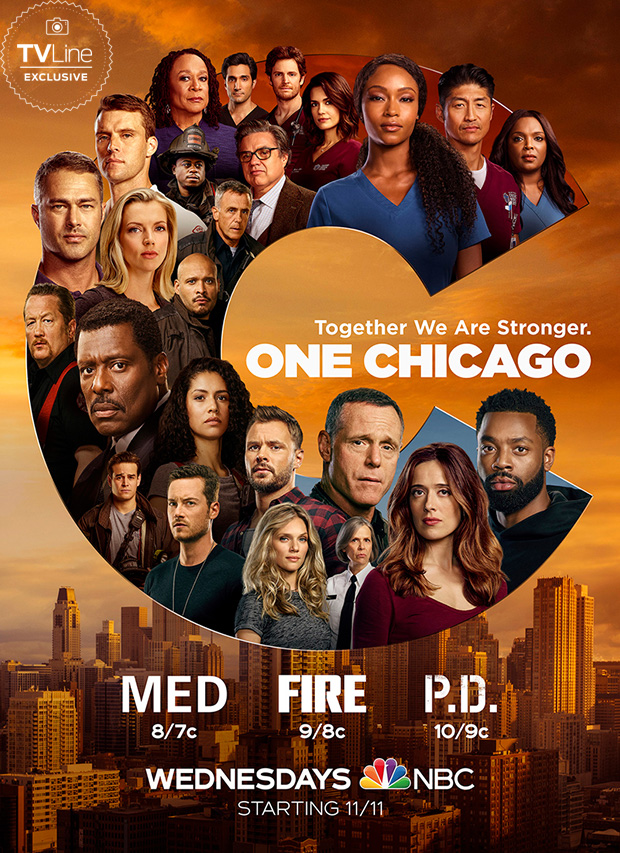 “On Chicago Fire and Chicago P.D., there will be references to the pandemic, but they will be more subtle. For example, fewer civilians in the bullpen in Chicago Fire,” executive producer Dick Wolf told EW.com. “But Chicago Med will address the pandemic head-on. There will be a COVID unit in the hospital, incoming patients will be tested by paramedics, and one character will be recovering from the disease. It will be part of daily life, and adjustments will be made.”

The #OneChicago universe has also gone through some cast shake-ups over the hiatus: Lisseth Chavez, who played P.D. rookie Intelligence officer Vanessa Rojas, will not return for Season 8. (The actress has landed a full-time gig on The CW’s Legends of Tomorrow.) The cop drama’s upcoming run will include a police reform storyline, featuring Nicole Ari Parker (Empire) in the recurring role of Deputy Superintendent Samantha Miller. On Fire, Daniel Kyri (aka firefighter Ritter) is now a series regular for Season 9, and Adriyan Rae (Vagrant Queen) has joined the ensemble as a new paramedic, filling the slot left by the departure of Annie Ilonzeh (aka Emily Foster). Meanwhile, Med has tapped Tehmina Sunny (Pandora) for a multi-episode arc in Season 6.

The Windy City-set franchise is slated to return Wednesday, Nov. 11, starting with Med at 8/7c, and followed by Fire and P.D. at 9 pm and 10 pm, respectively.

#OneChicago fans, what do you think of the unified poster? Hit the comments with your thoughts!