The story is a familiar one to fans of Power: Smart Black kid engaged in a highly lucrative, very illicit business has a white, off-kilter best friend who helps him run the show.

“Brayden is Tariq’s best friend. Ghost was Tommy’s best friend,” Kemp tells TVLine. “But the way that it’s different is that when people try to make that equivalency, Tommy was even more street savvy than Ghost, even more of the life than Ghost was. Ghost spoke two languages and Tommy spoke one, but he spoke it really well.” 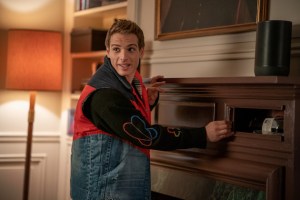 Gianni Paolo’s character — who is a legacy student at a university where buildings bear his family’s name — comes from a much different background than the eminently watchable killer played by Joseph Sikora in the original series. And Kemp says that that difference in upbringing makes Tariq and Brayden’s current venture much different from Ghost and Tommy’s.

Brayden “has come up with money in the same way that Tariq has. They have a lot of shared background, but it’s not the one that prepares you for the street,” she continues. “With that said, Brayden doesn’t have the fear that comes along with being African-American. He’s very free as a straight, white male, and very free in the world. He’s freer than Tommy ever was.”

Bottom line? “There’s some aspects of Brayden’s character that will be even more useful to Tariq than Tommy was to Ghost,” the EP previews.