Unbeknownst to the perpetually late Stansfield student, Davis Maclean and Cooper Saxe team up to get Tasha out of jail by proving that she didn’t kill Ghost — because Tariq did. The alliance is destined to make all sorts of trouble for Tariq who, we should note, now is considered an adult in the eyes of the law.

But in the episode (which serves as the show’s midseason finale), ‘Riq doesn’t know about his mother’s lawyer’s secret dealings. He’s far more busy dealing with trying to pass Monet’s loyalty test and navigating an awkward situation when both Lauren and Diana show up at his surprise birthday party. Oh, and then there’s the not-insignificant matter of his getting drugged (by Saxe’s loose cannon niece, Riley) and inadvertently rambling about Ghost’s murder in a way that gives Saxe ammunition in his case.

In separate interviews, TVLine had executive producers Courtney Kemp and Curtis “50 Cent” Jackson break down the episode with an eye to the second half of the season: Is Tariq ready to be a full-on member of Monet’s inner circle? Read on for their answers.

TVLINE | Characters have talked about how cutthroat Davis Maclean is, but this episode — when he does not care one bit that Tariq might get the death penalty — is the first time we’ve seen it.
KEMP | Well, Paula has been saying it all along. Paula’s been saying, “Where’s this money coming from? Why are we taking this case? this kid is a mess, he’s carrying a gun.” Davis has been kind of like, “Um, shruggsies, I want to get my win,” and as long as Tariq keeps paying, he’s down. That doesn’t mean Tariq’s the client. His client is Tasha, and he keeps saying, “I want the W. That’s all I want, is the W.” So he is single-minded in purpose about winning the case and beating the Feds, and also, there’s a part of it that’s a little bit self-righteous, and he is on the side of the angels because she is innocent of being the queenpin of the whole thing, but he’s that guy.

TVLINE | It occurs to me that Saxe generally makes the worst decisions. This one, though, seems like one of his better choices. Tell me where I’m wrong.
KEMP | I so want to tell you, and it’s so juicy, but I’ll just say this: When his brother says, “You’ve already made the bonehead move that’s going to get you fired and ruin the family name,” he’s right.

TVLINE | What can you tease about how Saxe and Maclean’s partnership is going to go as the season progresses?
JACKSON | Saxe and MacLean’s deal to team up against Tariq will be tested. You’re putting two people who have been at each other’s throats all season together: How do you think that’s going to end? 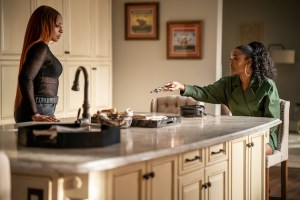 TVLINE | Tariq clears a hurdle with the Tejada family this week. How solid is that? Once you’re in with her, are you in?
KEMP | Tariq is getting in more and more with the Tejadas at the same time as Cane is kind of starting to have a little bit more struggle with his mom, so — in his quest to find family and home and to continue to pay for his mom’s defense — you’re going to see Tariq keep up with Monet’s pace and yet deal with the fact that she still doesn’t trust anyone. He’s getting closer. You’re right, he’s getting more in. But she doesn’t trust him fully yet.

TVLINE | At this point in the season, what do you think are the smartest things that Tariq is doing, and what are some of the dumbest things he’s doing?
KEMP | He’s not showing up on time, that’s not so smart. Course Correct, his app, is smart. His relationship with Brayden is very smart to some extent, because Brayden is eager to please, eager to help him. I probably would not romance two girls at once, but that’s me. That’s not everyone. [Laughs]
JACKSON | Tariq is doing whatever he can to help his mother, who has been accused of killing his father, while also trying to keep up with his studies. He’s learned well from Ghost on how to use his brain to play the game to his advantage. With that, though, he might be getting involved with the wrong people and digging himself in deeper than he can swim.

TVLINE | We’ve only seen Monet be a badass. What’s her weakness?
KEMP | She really loves her children, and if one of them or more gets harmed, you may see a different side of Monet.

Now it’s your turn. Grade the midseason finale via the poll below, then hit the comments with your thoughts!