James “Ghost” St. Patrick may be gone, but his spirit lives on — in more ways than one — in Power‘s first spinoff.

Power Book II: Ghost so closely follows the events of Starz’s original series that it almost feels like a seventh season, albeit one focused on the characters tumbled haphazardly on the shore following the tidal wave of Ghost’s murder. But these characters — Tasha and Tariq chief among them — now must navigate new environments (prison for her, college for him) and interact with new players as they both try to distance themselves from their parts in Ghost’s untimely end.

And ultimately, that’s where Ghost’s legacy looms the largest: His son and wife are more like him than they’d ever want to admit. Let’s see how they’re doing as we recap the series premiere, “The Stranger.”

BRAND-NEW GAME | When we meet up with the St. Patricks, Tasha is on her way to her arraignment, where her lawyer — Tameika Robinson, aka Angela’s old boss — tells her that self-defense is her only defense. But the judge isn’t buying Tameika’s claims that Ghost was a “smiling sociopath;” Tasha is remanded to custody, no bail. 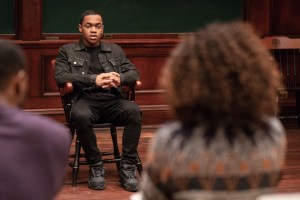 Back at Stansfield University, Tariq is made aware of the terms of his admission there. He’s going to room with one of the school’s star basketball players, a student named Ezekiel, and tutor him in all subjects in order to keep his grade point average in a range that will allow him to stay on the team. Or, as Simon Stern blithely puts it: “Zeke doesn’t play, you don’t stay.”

We also meet some of Tariq’s classmates, including a lovely lady named Lauren and ‘Riq’s old Choate roommate Brayden, as well as his adviser, Caridad Milgram (played by This Is Us alum Melanie Liburd). Tariq wants into a rigorous program called canonical studies — which will allow him to graduate early (and maybe just let him get his hands on that trust money more quickly) — but first he’s got to pass an oral entrance exam on Albert Camus’ The Stranger. 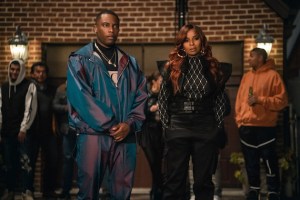 Tariq shows up late and unprepared for the test, which he fails. But Prof. Milgram argues that he deserves another shot, and he gets it. He winds up passing and gaining access to the accelerated study program. He also meets his new roommate, Zeke, who brings Tariq to a family party to celebrate his entrance into Stansfield. Ezekiel has a huge family and lots of cousins; he’s been living with his aunt and her kids for a while. Diana is one of the cousins, and she and Tariq have some flirtily friendly conversation before her brother, Cane, gets into a fight with one of the male guests over a girl. Guns come out, but Cane and Diana’s mom Monet (played by Mary J. Blige) shuts that down quickly. We learn that Cane and Diana have another brother, Drew, and their dad is a big-time drug dealer who is currently in jail for a long time.

About a day later, Cane ambushes the guy in a stairwell at his job and kills him. Then he slips out the back into a getaway car… driven by Monet, who dispassionately wipes an errant bit of blood spatter from her son’s neck. 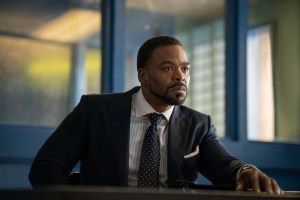 SAXE FACTS | What about Cooper Saxe, you’re wondering? Well, we meet his family, including the brother who thinks he’s going to mess up his important new job. And that may bear out, given how quickly Tameika realizes that her former co-worker was at Truth the night of Ghost’s death. “If she names you, can you prove you are innocent?” Tameika asks Saxe. (We all know the answer to that.) So Saxe meets with Tariq to tell him that the idea of framing Dre as the killer is a bad one: There was no gunshot residue on Dre’s clothes when he was arrested the night of the murder. With Tariq threatening to mention that he saw Saxe at Truth that night, Saxe says he can push for a deal — but Tasha HAS to name the shooter.

There’s still the matter of Tasha’s legal representation, which after Tameika is being handled by an overwhelmed public defender. So Tariq works with Epiphany (aka the exotic dancer from the daycare who ran Tasha’s drugs through her club) to move some weight and raise some of the money Davis Maclean requested. Then Tariq goes an Instagram live thanking Maclean for taking the case — which he hasn’t. Word travels fast, and Maclean realizes the kind of publicity he could attract for being involved with the St. Patricks… and he likes it. He accepts the case. 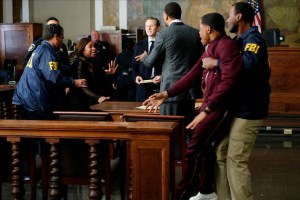 TASHA’S COURTROOM BOMBSHELL | But Maclean too smart to believe Tasha’s claims that Dre killed her husband, and if she’s going to take the District Attorney’s deal (three years’ probation, no murder charges), she’s got to name names. So in court, under duress, she says, “The man who killed James St. Patrick is Tommy Egan.” (!!!) When asked why, she responds, “Because I asked him to.” (On that note: Make sure to see what showrunner Courtney Kemp had to tell us about a certain someone who may show up before the of the season.)

As it turns out, those are exactly the words that Saxe and Democratic Party power player Steven Ott want to hear… because it allows them to go after Tasha under the kingpin statute. So after the DA drops the local charges, Saxe moves in and arrests Tasha on federal ones. She’s hauled back to jail while a gobsmacked Maclean tries to figure out exactly what he’s gotten himself into.

“What don’t I know about your mother?” he asks Tariq afterward. Tariq tells him not to worry about it, because “I got you into the biggest case of your career” and he’ll blow up the entire United States Attorney’s office when he eventually takes down Saxe. Maclean looks unconvinced, then reminds Tariq that he owes him $450,000.

Now it’s your turn. What did you think of the spinoff’s premiere? Grade Episode 1 via the poll below, then hit the comments with your thoughts.