CBS All Access is looking to soak up some of SpongeBob SquarePants‘ success. The streaming service announced Thursday that it will be the exclusive home to the Kamp Koral, a CG-animated prequel series that follows 10-year-old SpongeBob to summer camp.

Previously intended for Nickelodeon, the first SpongeBob spinoff will instead bow as part of a rebranded CBS All Access, which is set to undergo a name change in 2021 as the streamer expands to include titles from across the ViacomCBS portfolio. All Access will also serve as the exclusive home to The SpongeBob Movie: Sponge on the Run, whose theatrical release was halted in the wake of the coronavirus pandemic. (Per Variety, the expanded All Access will remain $5.99 per month with ads, and $9.99 monthly with no ads.) 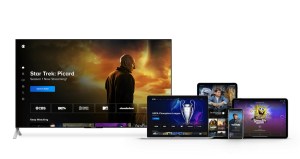 All Access has also unveiled a new user interface with curated homepages, new content categories and central hubs for ViacomCBS’ many brands, including BET, Comedy Central, MTV, Nickelodeon, Smithsonian Channel, TV Land and VH1. As of Thursday, more than 3,500 episodes of television from across the ViacomCBS library have been made available, including all seasons of BET’s Real Husbands of Hollywood and Hit the Floor; Comedy Central’s Chappelle’s Show, Reno 911! and Strangers With Candy; MTV’s Laguna Beach and Snooki & Jwoww; Nickelodeon’s Avatar: The Last Airbender, Rugrats and SpongeBob; TV Land’s Hot in Cleveland; and VH1’s RuPaul’s Drag Race and Love & Hip Hop.

Will you subscribe to CBS All Access so you (or your kids) can watch the SpongeBob prequel series? Or will you forgo attendance at Kamp Koral and stick to the original series on Nickelodeon?