Ahead of its upcoming 17th season, Grey’s Anatomy is making a number of staffing changes, one of which could directly impact the romantic life of Meredith Grey.

An ABC rep confirms to TVLine that Richard Flood — who joined the Grey’s cast last fall as Dr. Cormac Hayes, a potential love interest for Ellen Pompeo’s titular MD — has been promoted to a series regular. When Season 16 (abruptly) ended, Meredith was grappling with how best to help troubled ex-boyfriend Andrew DeLuca (Giacomo Gianniotti) while at the same time contemplating overtures made by Flood’s “McWidow.” (Showrunner Krista Vernoff recently confessed to TVLine that even she is torn about which guy Mer should ultimately gravitate toward; might Flood’s promotion offer a clue?) 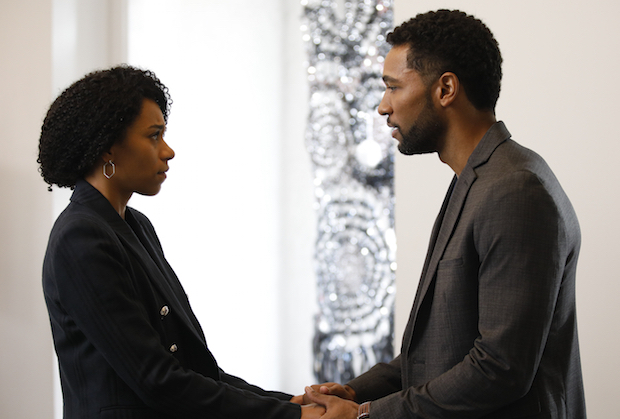 Additionally, Anthony Hill — who guest-starred last season as Dr. Winston Ndugu, an old colleague of Maggie’s (Kelly McCreary) — has been upped to a series regular. You’ll recall that when Maggie and Winston reconnected at a medical conference, sparks flew.

Rounding out the Grey’s newsapalooza, cast member Stefania Spampinato is officially making the jump to sister show Station 19, where she will be a series regular in Season 4. The actress’ full-time relocation hardly comes as a surprise, seeing as her character, Dr. Carina DeLuca, made nearly a dozen appearances on the firefighter-themed spinoff last season after striking up a romantic relationship with Maya Bishop (played by Station 19 regular Danielle Savre). Spampinato joined Grey’s in Season 14 as Andrew’s sister.

“I am so excited to add Anthony, Stefania and Richard to the Station 19 and Grey’s Anatomy families,” said Vernoff, who oversees both shows, in a statement. “They are huge talents who made a big impact with our fans, with our casts and with our writers, who are eager to write more for them.”

Grey’s Anatomy saw its 16th season cut short by four episodes due to COVID-19. As we reported back in April, sources say that one of the scrapped hours was to feature the death of a major character. It remains unclear whether the rumored departure will now be folded into Season 17 or delayed indefinitely.

Another unknown: when Grey’s will return to the studio to begin production. In a recent interview, Vernoff did not float even a tentative date for getting back to work, although she did confirm that when shooting does resume, the pandemic will “for sure” be incorporated into the action.

“There’s no way to be a long-running medical show and not do the medical story of our lifetimes,” the EP maintained. “I feel like our show has an opportunity and a responsibility to tell some of those stories. Our conversations have been constantly about how we keep alive humor and romance while we tell these really painful stories.”