It’s never too early to start trying to figure out who’s under those big, furry heads.

In that spirit, Fox has released a new promo for The Masked Singer‘s upcoming Season 4 that features the first hints at the new spate of competitors.

The video above zooms around a digital scrapbook, lingering here and there on seemingly random images. Which of the pictures are crucial bits of coded intel about future contestants? Which are red herrings? Which are just there to troll perpetual punching bag/judge Ken Jeong? You be the judge, starting with the screen grab below: 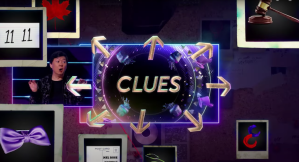 The Masked Singer will return to Fox in September. The wacky singing competition was renewed in May. After host Nick Cannon made anti-Semitic comments during an interview in July — and then issued a public apology — the network put out a statement saying he would remain part of The Masked Singer for the coming season.

“When we were made aware of Nick Cannon’s interview with Richard Griffin on YouTube,” the statement said, “we immediately began a dialogue with Nick. He is clear and remorseful that his words were wrong and lacked both understanding and context, and inadvertently promoted hate. This was important for us to observe. Nick has sincerely apologized, and quickly taken steps to educate himself and make amends. On that basis and given a belief that this moment calls for dialogue, we will move forward with Nick and help him advance this important conversation, broadly. Fox condemns all forms of hate directed toward any community and we will combat bigotry of any kind.”

Press PLAY on the video above to start amassing clues, then drop your best guesses in the Comments!